We know that convolution in time is equivalent to multiplication in frequency (Fourier). $$x_1(t) \ast x_2(t) \leftrightarrow X_1(\omega)X_2(\omega) \tag1$$ However, for a sampled signal, this property only holds if the frequency resolution $\Delta f = \frac{1}{T}$ for the sampled signals are the same, i.e. the signals have to have the same duration. This is illustrated below. 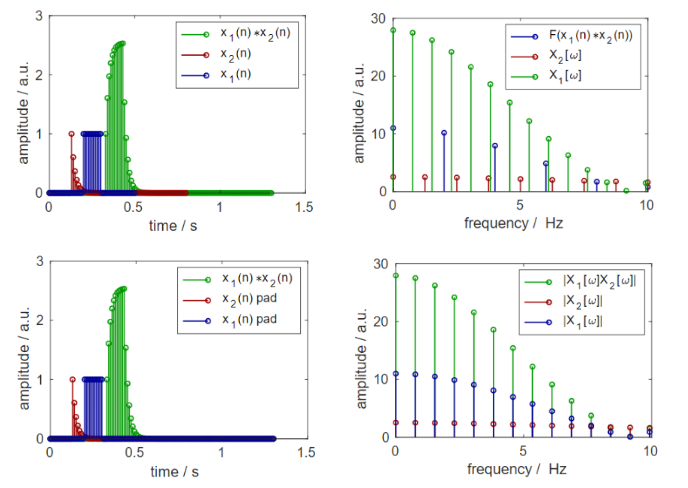 If the sampled signals $x_1(t)$ and $x_2(t)$ initially don't have the same duration, then we can zero pad the signals, such that they do. This is what is done in the lower graph pair and the samples now line up in the spectrum. Both $x_1(t)$ and $x_2(t)$ have been zero padded, such that they have a length of length(x1)+length(x2)-1 , which turns out to be the length of the convolution length(conv(x1,x2)) .

Multiplication in the frequency domain is equivalent to circular convolution in the time domain with a period of NFFT. If you don't zero pad them to at least length(x1)+length(x2)-1 samples, the IFFT result would be aliased in the time domain. That's why overlap-save method discards part of the result.

Either someone didn't stress enough that there are four basic flavors of the Fourier Transform, or they did introduce that for you but you've forgotten.

For a sampled-time signal of infinite extent in time, you should use the DTFT (not to be confused with the discrete Fourier transform, of which the FFT is the fast version).

If you use (2) in calculating (1), then there's no adjustment needed -- things just work. Technically, this is the "proper" way to do it, but it's not amenable to doing things numerically.

The problem with (4) is that because of the modulo on $k - \kappa$, if the result would have been longer than $N$, you end up with a result as long as $N$, but with it's tail added into its head.

If you're going to use the FFT to speed up the convolution, then the only way to avoid that is to pad out $x_1$ and $x_2$ so that the inverse FFT is at least as long as the expected result of the convolution.

Not the answer you're looking for? Browse other questions tagged fourier-transform sampling convolution zero-padding or ask your own question.

0
Can convolution of one signal with different signals give the same answer?
0
Magnitude spectrum for discrete-time signals
2
Phantom harmonics when using cosine windows why do they appear and how to avoid them?
0
Convolution effects width of the signal?
2
Solving for impulse response h[n] given input-output pairs
0
Deep Learning: Classification vs. Convolution for Signal Restoration
3
Why is CWT implemented with FFT convolution?
0
Unclear time-to-frequency integration step