OFDM symbol acquisition block in GNU Radio gives rotating constellation even if there is no carrier offset. How is this possible?

Why does the constellation rotate when using OFDM Symbol Acquisition block in this flow graph below ?

I think the OFDM Symbol Acquisition block only finds where the OFDM symbol is (by finding the cyclic prefix using the autocorrelation function - I believe) and does not do any further magic.

I am asking this because I am trying to demodulate a recorded OFDM signal for which I do not know the Sync Word but I can do carrier synchronization "by hand", so the OFDM Symbol Acquisition block would be useful in this case.

Here is the GRC file : http://pastebin.com/2WvRG2Ly 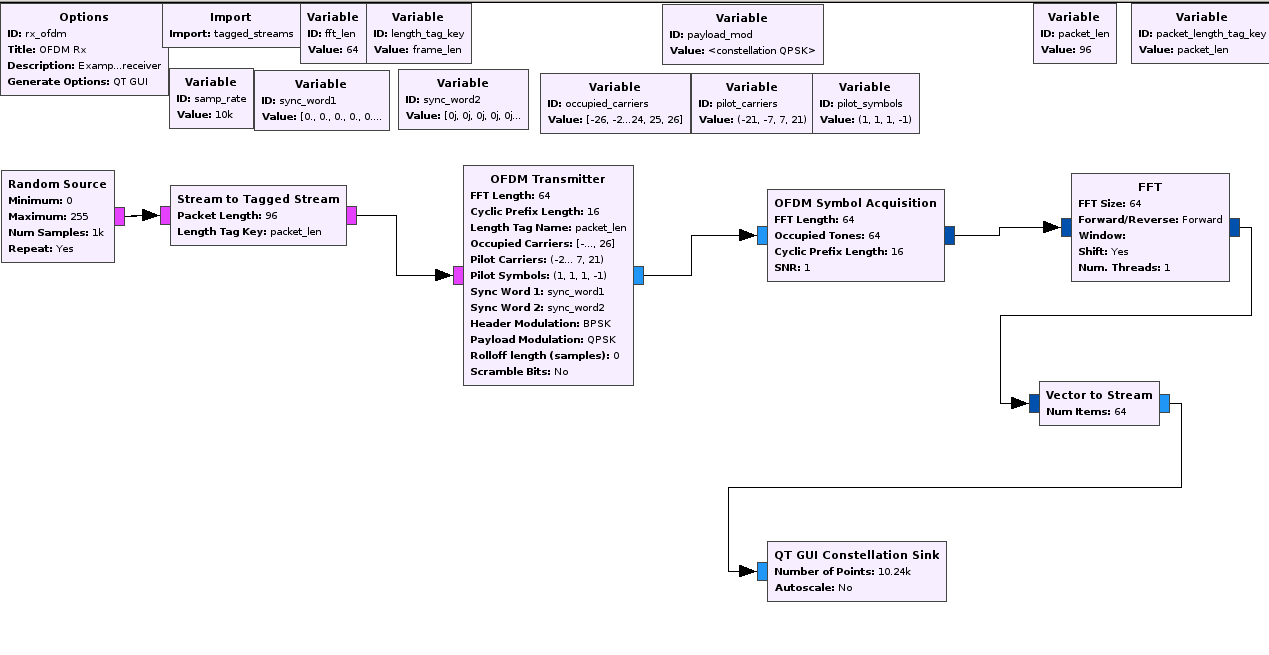 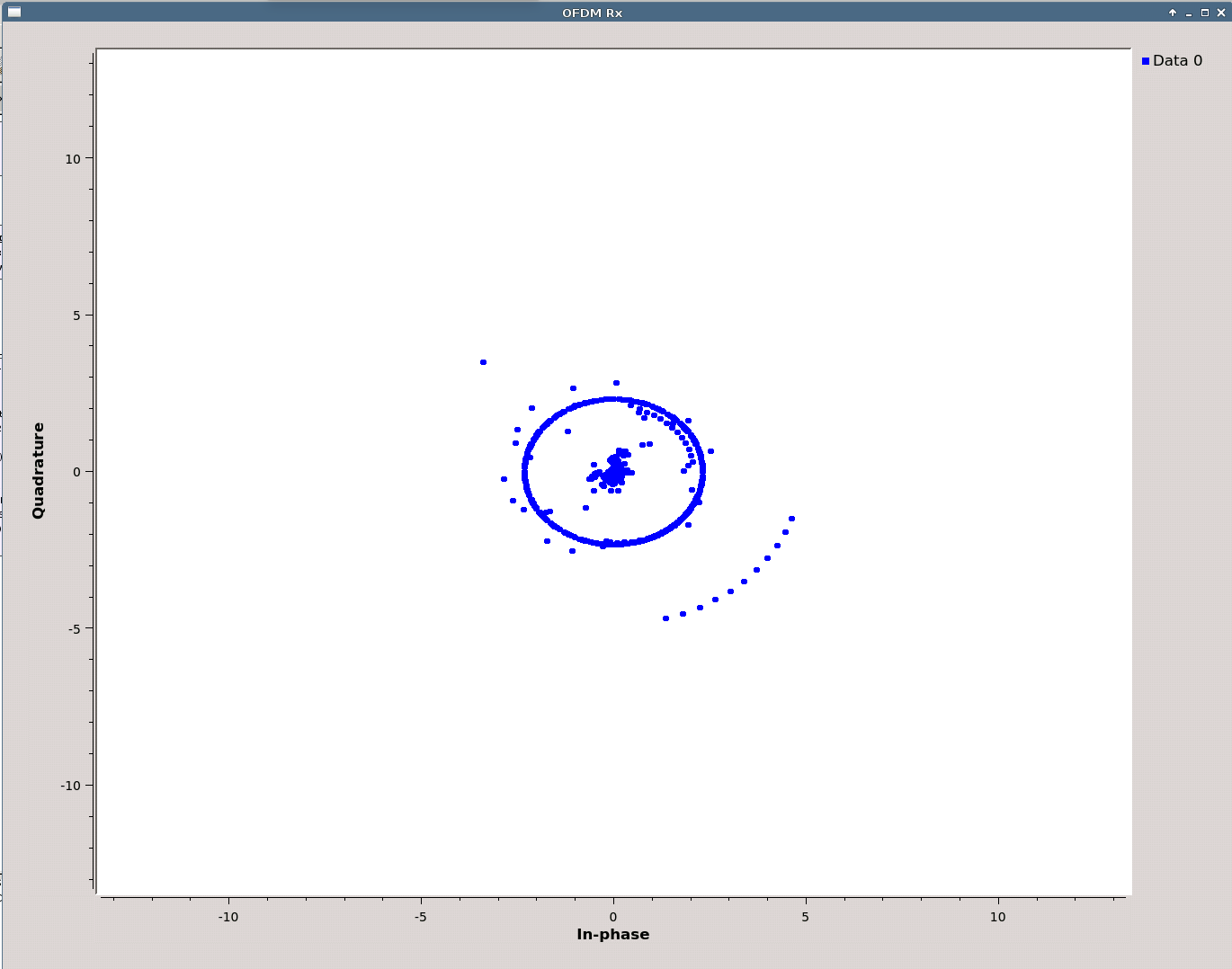 EDIT: Inspired by Marcus' answer I made the following simpler flow graph: 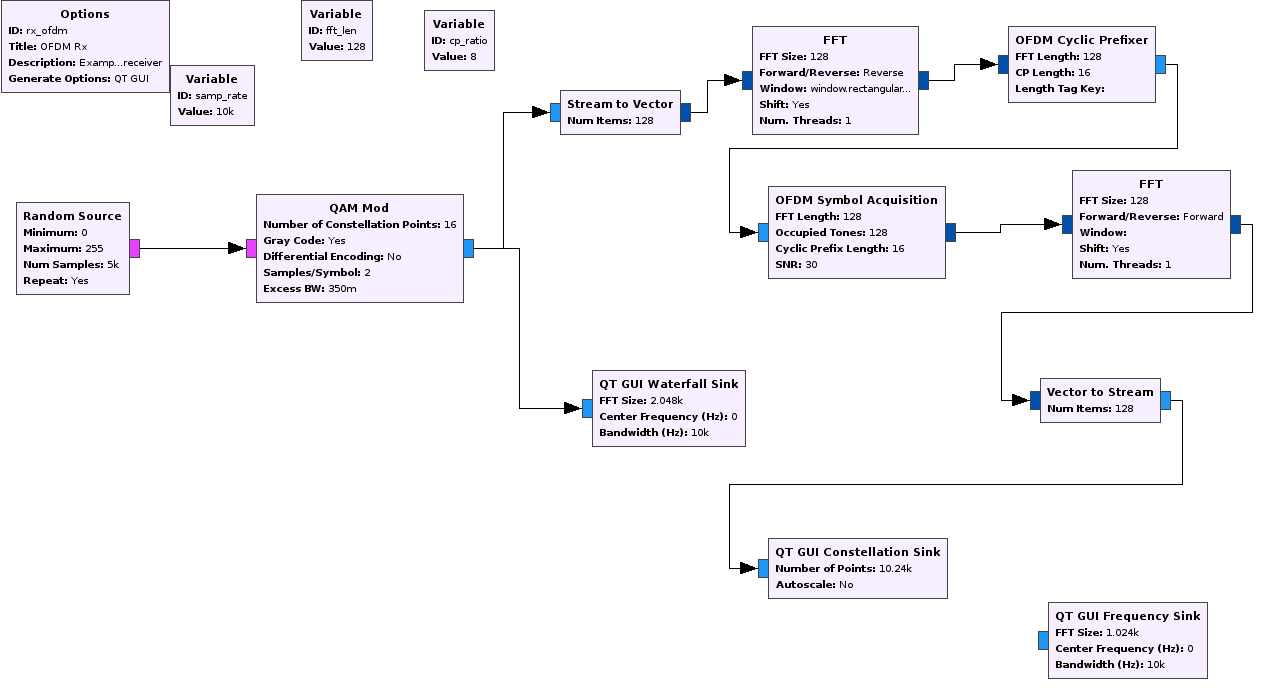 Which gives this result: 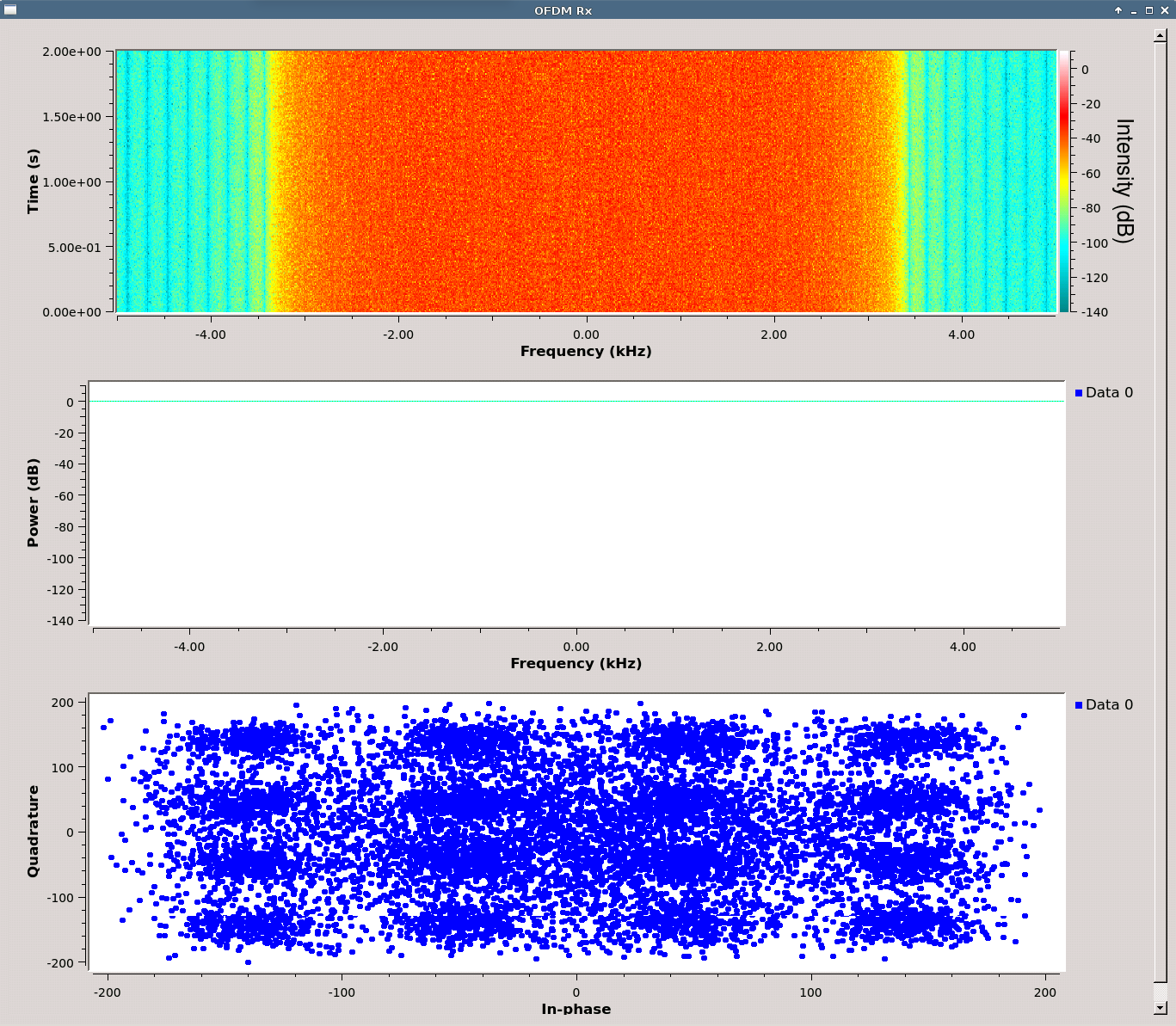 This is not spinning anymore :)

Now I wonder why is the constellation so noisy if there is no noisy channel?

It should not be noisy right ? 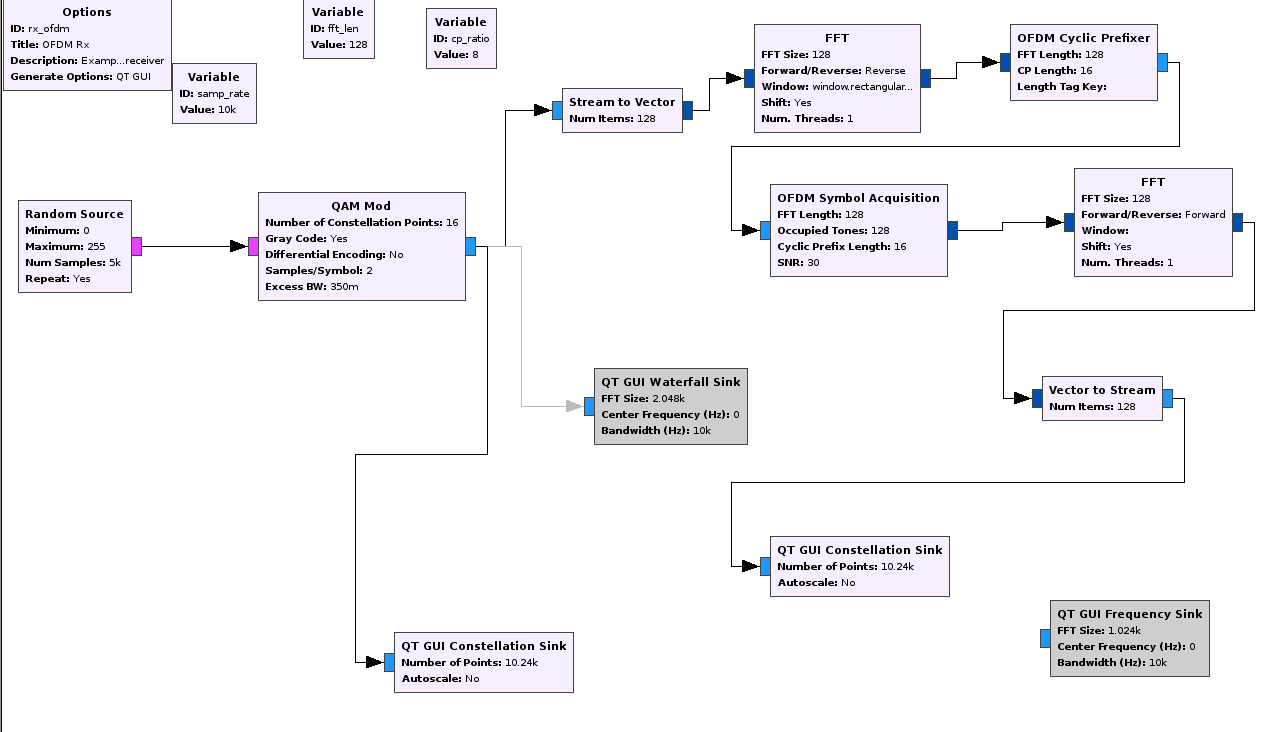 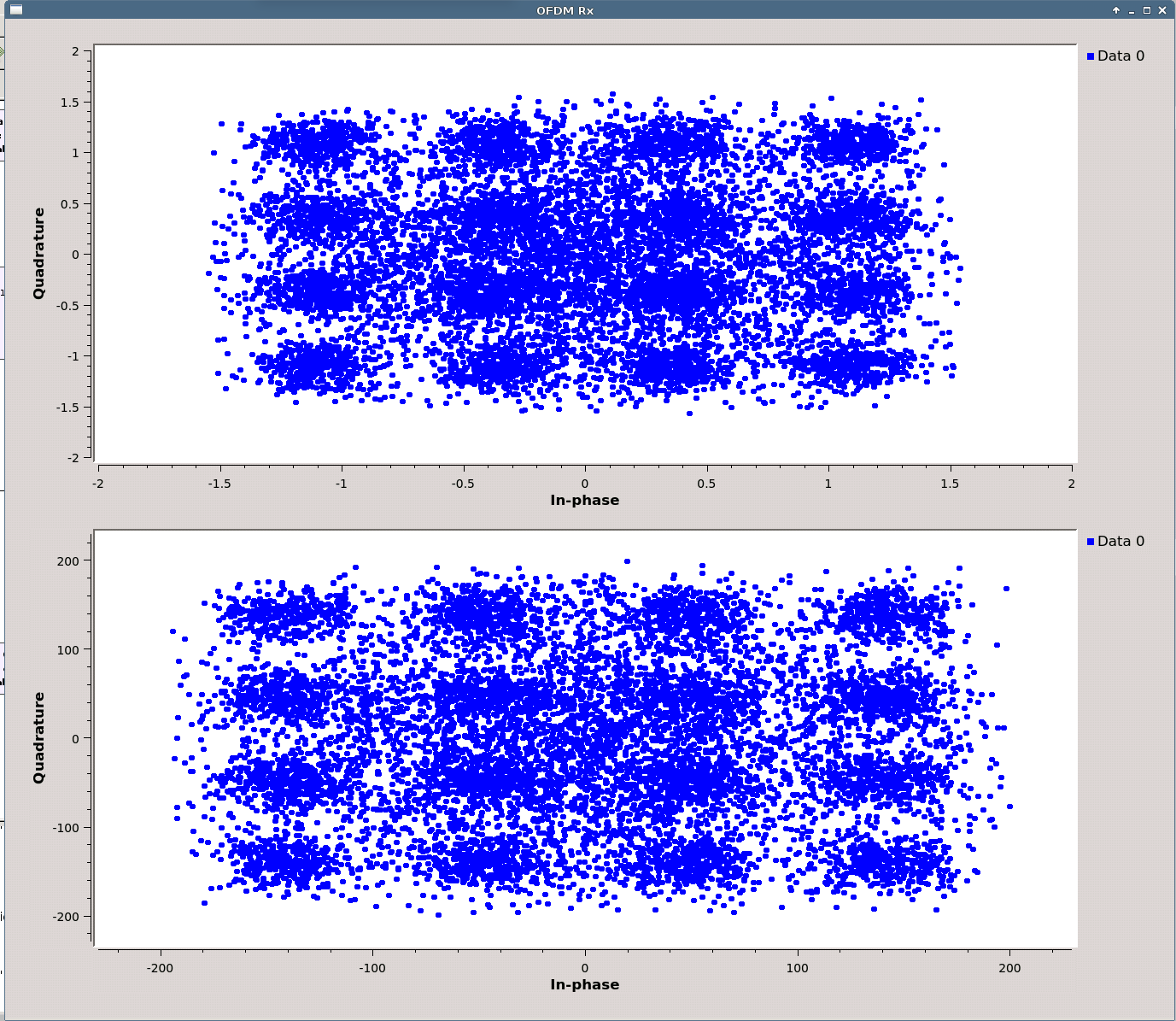 It seems to be noisy because the source is noisy, strange. Why is that ?

EDIT3: The source noisiness comes from the RRC filter.

Got me at that one! The "OFDM symbol acquisition" block is in fact not from gr-digital (where your other OFDM blocks come frome), but from gr-dtv, where it is used to capture DVB-T signals, if I remember correctly. It might be very DVB-specific! Let us have a look at the dvbt_rx_8k.grc example from gr-dtv (or, at least, the top half):

So your understanding is absolutely right, OFDM symbol acquisition just does some syncing.

This time, I'll leave a bit more up to your own research (as finishing this up as a nice answer will probably take quite some time), and will concentrate on the steps I took to figure out how the block works. I hope this is most helpful to you, and of course helpful for future answer-seekers trying get the general grasp on how to find out how GNU Radio blocks "tick". Looking at your flow graph, I'm pretty sure you've done most of this already, but as I mentioned, I'd like to illustrate the "investigative principle" for others.

The usual stuff: input items are in in, output goes to out:

Ah-Ha! We loop over something, let's keep an eye out for the i.

ok, judging by the variables name this is the case of us not having "locked" on to sync sometime. Let's concentrate on this and ignore the other case for now.

This looks a lot as if the interesting work is done in ml_sync. d_cp_length definitely points to us having to deal with a system that uses cyclic prefixes.

I decide to break here and take a look at ml_sync.

The name is pretty revealing already; it's probably going to be a Maximum Likelihood Synchronizer.

So, going up in the source, we find ml_sync. It's pretty well-commented and uses (VOLK = Vector optimized library of kernels) functions that have names like magnitude_squared; I think I'll leave the lecture up to you and give you my quick understanding of it:

So what we have here is an autocorrelation-based synchronizer that locks onto the cyclic prefix. Nice!

Comparing this with Schmidl&Cox that was used in ofdm_rx.grc, calculating the autocorrelation is of course pretty CPU-intense, and we need as much Cyclic Prefix as we can get. However, this might be (is) a suitable synchronizer for the typical broadcast channel, where FFTs are long, and so are prefixes, and the trade-off between being fast at decoding packets and not missing a single packets is biased in favor of a RX-maximizing receiver operation characteristic.

To the question why this doesn't work in your setup, I must admit that it's a bit over my head. My intuition tells me that there might be ambiguities due to your 1/4 payload/prefix ratio, and you consistently lock onto the middle of two consecutive frames or so.

The point is: try!

While I did not implement your blocks excatly to closely look at what's happening, I think the reason is the following.

First, the noisy samples shouldn't be noisy because OFDM works with raw symbols; in your second flowgraph, you are using pulse shaped symbol stream which is bound to generate such clouds around the original values.

Second, the SNR difference between your first and second flowgraph is huge, being 1 and 30 dB, respectively. With low SNR, you might be locking on to a sample to the left or right of the original timing point. Going in the frequency domain next, a wrong reference point (shift in time) invokes a complex exponential in frequency whose period depends on the timing offset. And that is why you are seeing the rotation.

Increase the SNR sufficiently high in your first flowgraph and see if it is still spinning.

Not the answer you're looking for? Browse other questions tagged demodulation ofdm gnuradio constellation-diagram synchronization or ask your own question.