Why does the OFDM serializer has such a strong denoising effect in the flow graph below ? Is that normal ?

Here is the OFDM documentation : http://gnuradio.org/doc/doxygen/page_ofdm.html

It does not help to explain why the serializer block has such a strong denoising effect, any idea why this denoising happens ?

Here is the flowgraph (in .grc format): http://pastebin.com/raw/PTY0Q0Ty 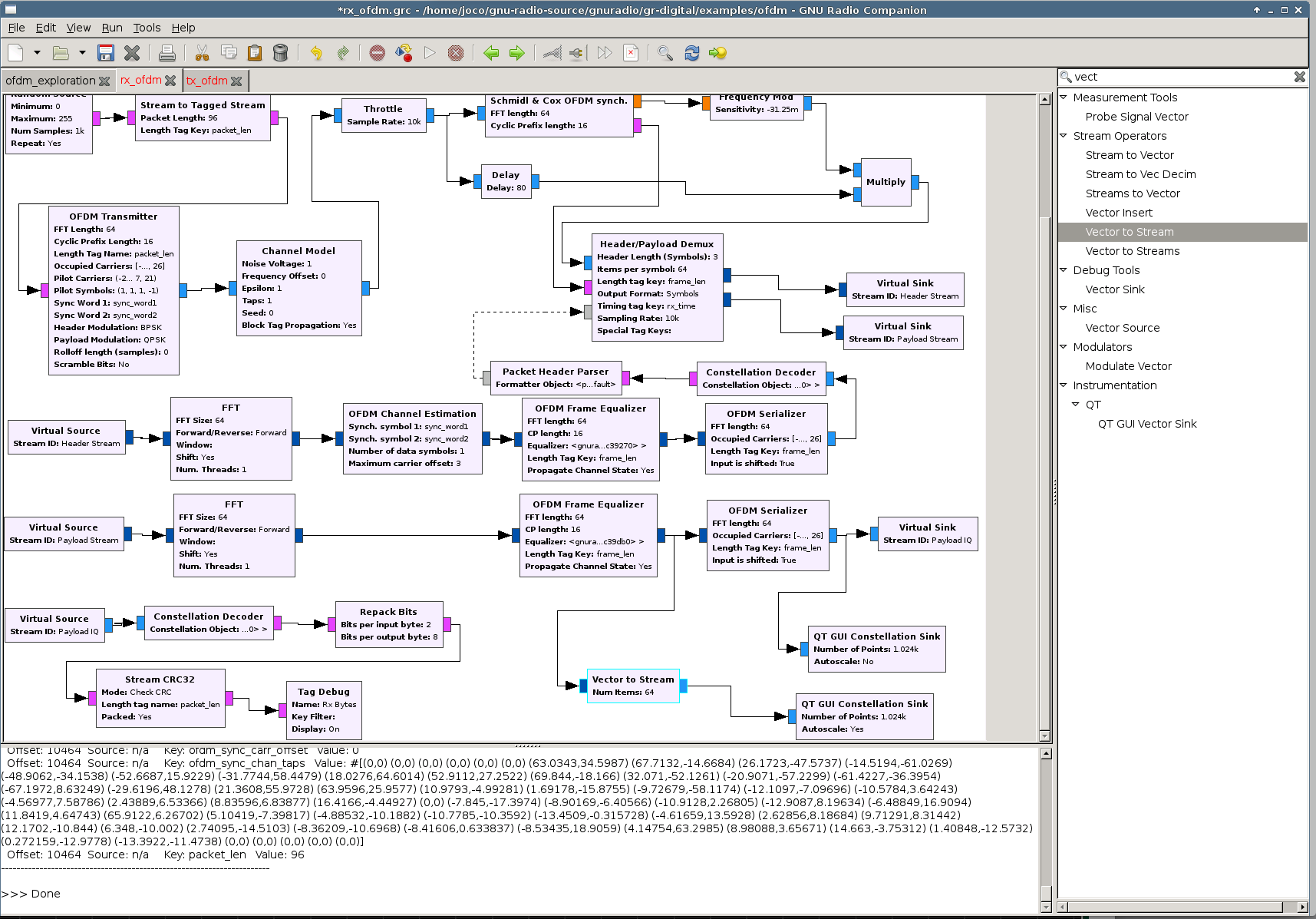 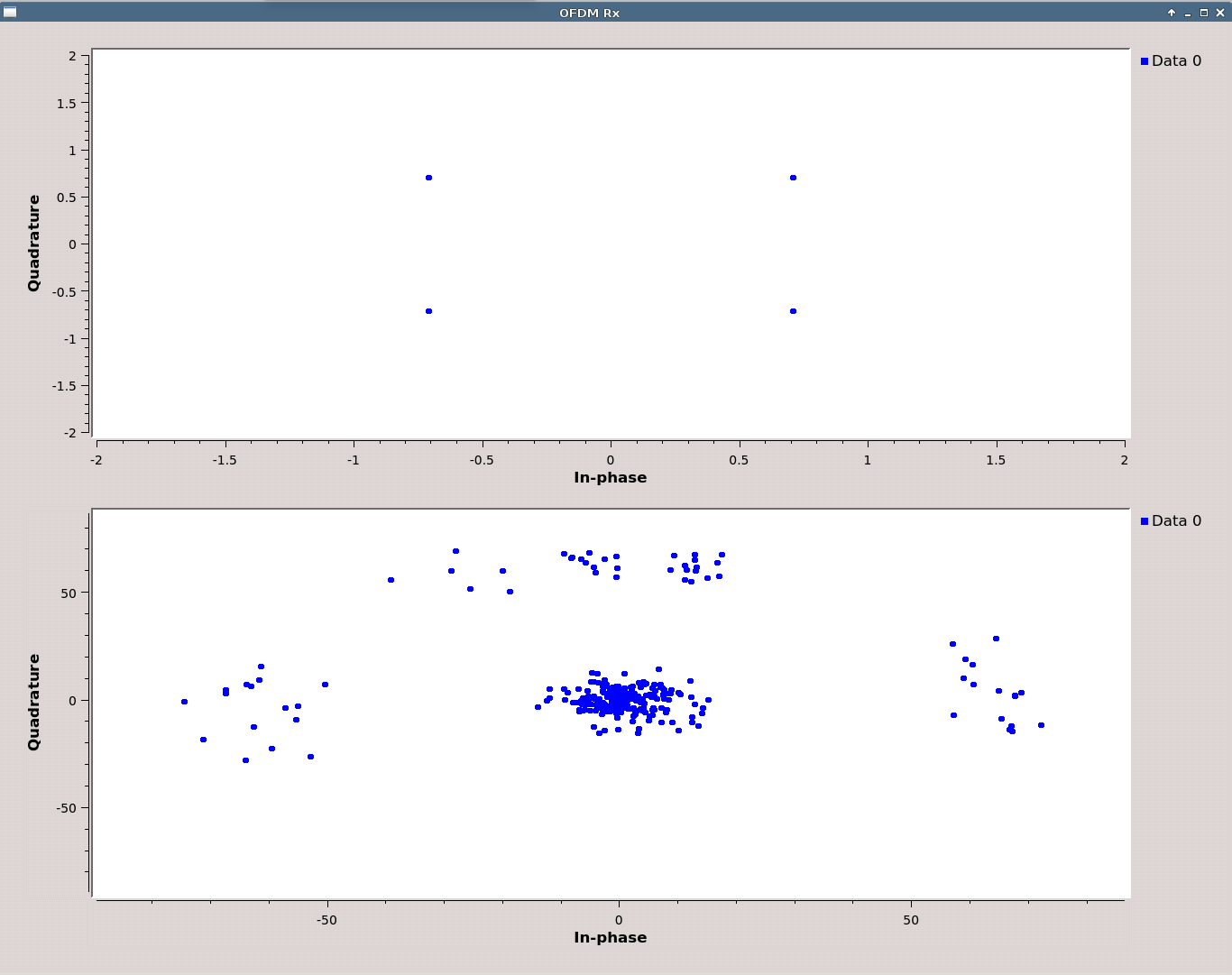 Further inspection indicates that the serializer block only does remove non data carriers. It just probably so happens that anything that is non data is super noisy, and data carriers are not noisy at all, but I still wonder how is this possible.

Further inspection shows indicates that the serializer block only does remove non data carriers. It just probably so happens that anything that is non data is super noisy, and data carriers are not noisy at all, but I still wonder how is this possible.

The magic that happens here is in the actual equalizer used in the frame equalizer block. If you'd scroll up in the GRC¹, you'd probably see the payload equalizer object block, holding a "simpledfe" equalizer.

Now, simpledfe stands for simple data feed-back equalizer. It's actually pretty well-documented, but somehow the documentation tool broke and the HTML documentation doesn't actually contain any of the explanation given in the source code.

So, here's a source code excerpt with the docs:

Hm, but what about unoccupied carriers?

Now, looking at the implementation in ofdm_equalizer_simpledfe we see:

In other words: those are left untouched from the original FFT.

Now, a typical direct conversion OFDM system will leave the DC carrier unoccupied – that containing the leakage of the receiver LO. That is typically a relatively powerful FFT bin, shouldn't vary much in magnitude, and its phase should depend on the point in time the DFT was taken, and that's the frame start time as determined by the Schmidl&Cox sync. That would be my explanation of the $|\cdot|\approx 50$ constellation points, and the rest might very well be the unequalized noise in original amplitude, especially since we're looking at a constellation sink that shows 1024 constellation points at once – so we'll see some outliers in noise power.

¹ It's often impossible to fit a whole GRC flow graph on the screen. It's therefore really handy that there's the "save screen capture button" in the toolbar and the menu!
Share
Improve this answer
answered May 12, 2016 at 10:00

Not the answer you're looking for? Browse other questions tagged demodulation ofdm gnuradio or ask your own question.

2
How does carrier frequency offset effect the constellation diagram in OFDM?
0
OFDM symbol acquisition block in GNU Radio gives rotating constellation even if there is no carrier offset. How is this possible?
4
gnuradio: How can I change the value of the tag exiting the "Correlate Access Code - Tag" block?
0
Should we upsample the channel when upsample the signal
0
Why samples per symbols $\geq 2$ in the GNURadio Constellation Modulator block?
0
Pilot-based channel estimation in OFDM systems with fractional delays