GNU Radio Companion - generating a 4-QAM constellation - how to do it?

I don't yet understand exactly what to do in order to get that QAM constellation map. But I've taken steps to string some blocks together - just to try something at least.

What I did was use a Vector Source block, that is set up at values '110100' (and this block is set to 'repeat' the pattern continually).

And then I have the QT GUI Constellation Sink block for viewing the constellation.

I know what I would like to do ----- but don't know what to do properly yet. But at least there are four points on the constellation diagram (as seen in the attached image).

May I ask what I need to do in order to get the Chunks To Symbols block to take in two bits at a time, in order to map each pair of bits to one of those four constellation points?

Could somebody help me by pointing out how the Chunks To Symbols block actually works? At the moment, if I purposely want to map the bit pair '11' to a particular constellation point - such as 0.707 + j*0.707, then is there a way to create that definition within the Chunks to Symbols block settings?

Right now, I don't actually know how the Chunks To Symbols block interprets the input data, and how it assigns various 'chunks' (which I assume are bit patterns) to each constellation point in the symbol map. That is, does this block look for various unique input patterns, and somehow links each unique input pattern to one of those values in the Symbol Map? 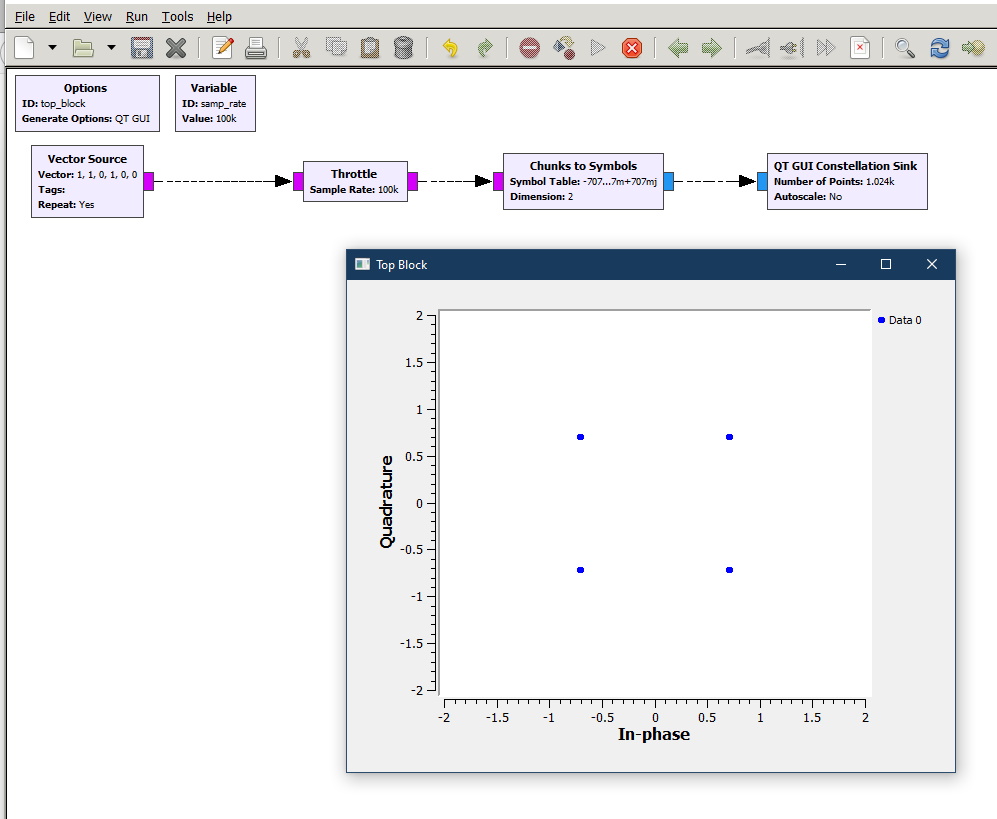 Thanks very much in advance! I'm very impressed with GNU Radio Companion and GNU Radio!

But - as we can see, when I put a single value of '3' for the repeating Vector Source, I get multiple points in the constellation diagram spread out across a line, instead of a concentration of points around the point 1+1j. Any nice recommendations on what I need to do to get on the right track? Thanks! 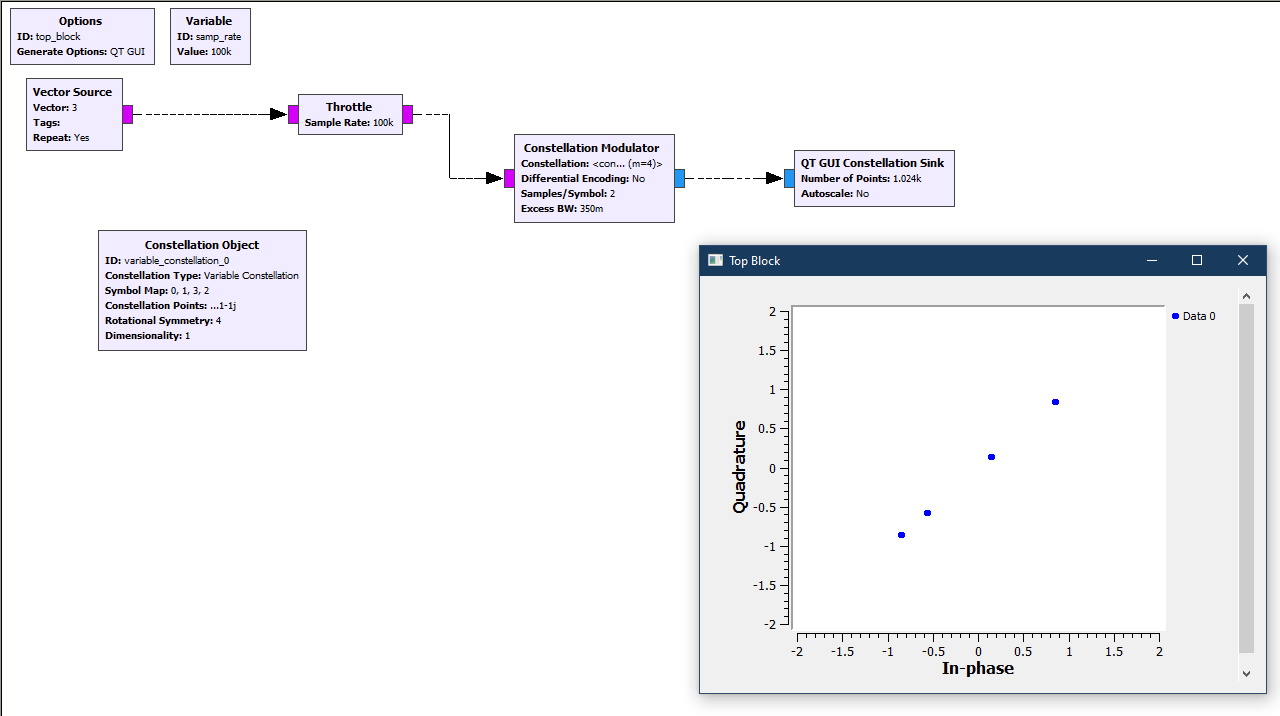 And if we want those values '0', '1', '2'and '3' to be associated with different complex numbers, then we would simply need to change the order of the complex numbers in the Symbol Table section of the Chunks to Symbols block (inside the settings). 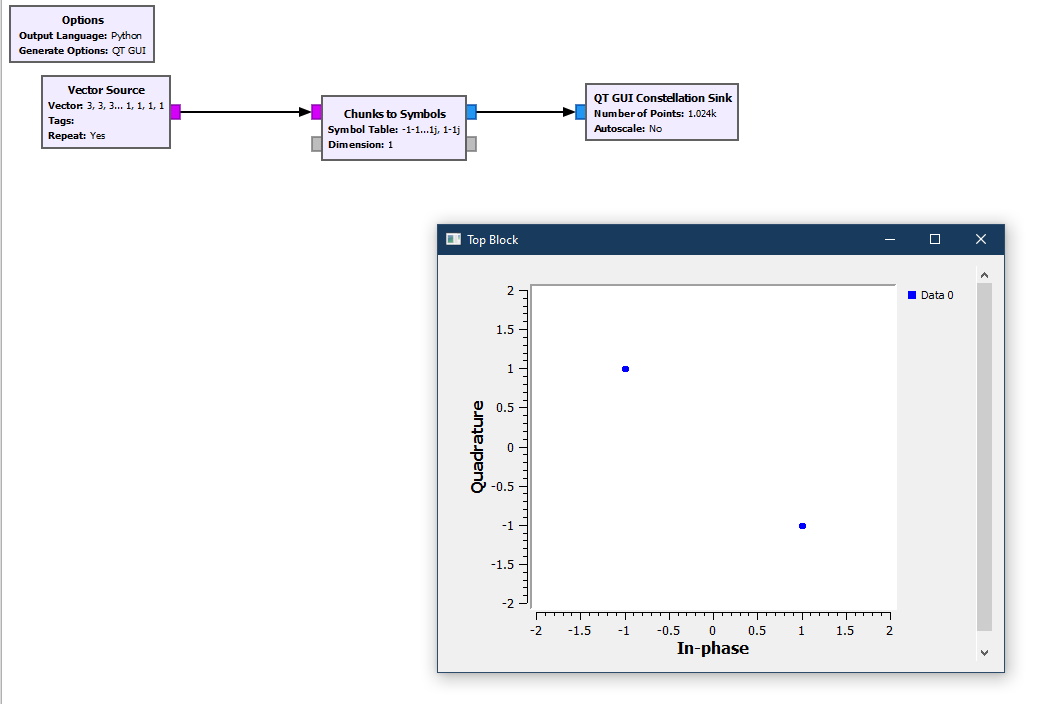 Also, changing the topic to the other method - involving the 'Constellation Object' block for generating constellation diagrams ---- I now know why I get a spread of points across a line. I notice that if I have a Vector Source that repeatedly outputs the value '3', which means outputting a 3, then another 3, then another 3 etc ....... then the associated complex value (that was assigned to '3' in the Constellation's Symbol Map) --- such as 1+1j (which is expected), but the next plotted point will not be 1+1j (associated with the next '3'). Instead, the Constellation plotter appears to jump back to the same initial starting point. So rather than plotting multiple points of 1+1j, the constellation plotter keeps jumping back to an initial starting point (consistently the same starting point - in this case -1-1j - which is the first value in the Constellation's Symbol Map) before plotting the next 'expected' complex value. I don't know why it does that yet. This is where I need more help too! Thanks again!

Sounds pretty sensible to me

May I ask what I need to do in order to get the Chunks To Symbols block to take in two bits at a time, in order to map each pair of bits to one of those four constellation points?

Chunks to symbol takes in one item at a time; you need to put in as many bits into that item as is right for your use case.

Or you could just convert your "one bit per item" stream to "two bits per item" using the Unpacked to Packed block.

Could somebody help me by pointing out how the Chunks To Symbols block actually works? At the moment, if I purposely want to map the bit pair '11' to a particular constellation point - such as 0.707 + j*0.707, then is there a way to create that definition within the Chunks to Symbols block settings?

As said, you need to put these two bits into a single item you feed to that block.

That block is really just a lookup table – it takes an input item, and uses it to as index into the vector of symbols you've fed in.

I said that in the comments, but let me repeat:

GNU Radio has tutorials, and a lively community. But: both of these things have moved on to GNU Radio 3.8 or 3.9 as of now. If you have a big legacy GNU Radio system that still runs on 3.7, that's fine, that's why we still have the legacy 3.7 maintenance range. But, learning GNU Radio, you really shouldn't be sticking to such legacy – it's really problematic. Relying on things like Python2, GNU Radio 3.7 simply is not possible to port to modern systems reasonably. That's why we had to release 3.8; please, don't put yourself in a dead end by starting with GNU Radio 3.7 now.

You say you've got GNU Radio 3.7.13.5, and that's newer than what's in debian stable. So, you're not on that. Chances are that if you can update your Linux Distro (or BSD) to a newer version, you get GNU Radio 3.8 or 3.9 out of the box. On Windows or OS X, I'd recommend anaconda as installation method, also very smooth and no manual builds involved.

Not the answer you're looking for? Browse other questions tagged gnuradio or ask your own question.