Derivation of the lowpass to bandpass transformation

I have a basic question.

On the other hand, mapping a single optimal filter will result in another optimal filter. Using $\omega_l\omega_u=\omega_0^2$, where $\omega_l$ and $\omega_u$ are lower and upper band edges, respectively, and $\omega_0$ is the center frequency of the band pass filter, and leaving out constants for the sake of simplicity, the transformation can be written as 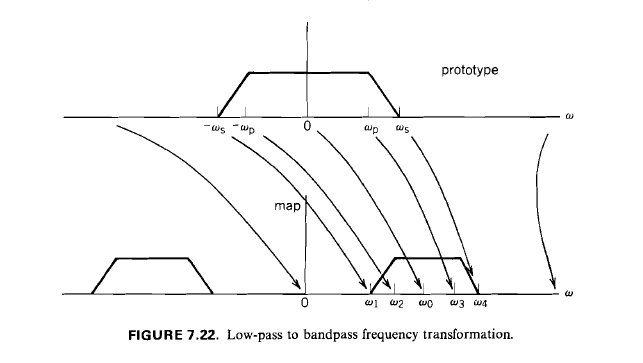 (from: Digital Filter Design by Parks and Burrus)

Not the answer you're looking for? Browse other questions tagged filters filter-design lowpass-filter filtering bandpass or ask your own question.

6
How is the lowpass to bandpass transformation derived?

6
How is the lowpass to bandpass transformation derived?
0
my Butterworth lowpass formulas do not agree with Fisher webpage
17
Filter design by distributing poles and zeros on parametric curves
6
Filter design with zero - pole placement method
1
Why is the second-order-section cascade approach giving "worse" results?
1
number of multiplications per second required by the system
7
Where do RBJ's analog shelving filters come from?
0
Get the transfer function when using the "designfilt" command in MATLAB
1
how to convert the zeros of an odd order Chebyshev Type II from low-pass prototype?
2
Butterworth Filter Transfer Function