When performing the Discrete Wavelet Transform in MATLAB using the command DWT or WAVEDEC, what it the exact time or pseudo-time location of the DWT coefficients?

At each level the time series is decimated by 2, this means that the coefficients should be localized at $2^j \, T_s$, where $T_s$ is the sampling frequency. However, the application of a reconstruction filter of length $M$ makes the coefficient arrays longer. And each level a longer coefficient array is then fed into a new DWT function, which modifies further its length. The arrays are also properly extended at each level, according to a criterion specified by the user using the command DWTMODE.

I see that in some MATLAB examples, just the central part of the array is shown using the command WKEEP. Is this approach sufficiently accurate, meaning that the external coefficients (those that are not central) are really NOT significant?

If I do not discard some coefficients, I clearly see a huge delay if I assign them to $2^j \, T_s$. I believe that the external coefficients are however necessary for the reconstruction.

How many coefficients can be discarded at each level, if they can be?

This question has multiple facets (after comments), so I will focus on the principal.

First, regarding coefficient localization: a discrete wavelet coefficient depends on several signal samples. The number of coefficients influenced by a single sample in a continuous wavelet representation typically depends on the properties of the mother wavelet and the signal regularity. This is illustrated on the following picture, with the modulus and the phase of a complex scalogram. 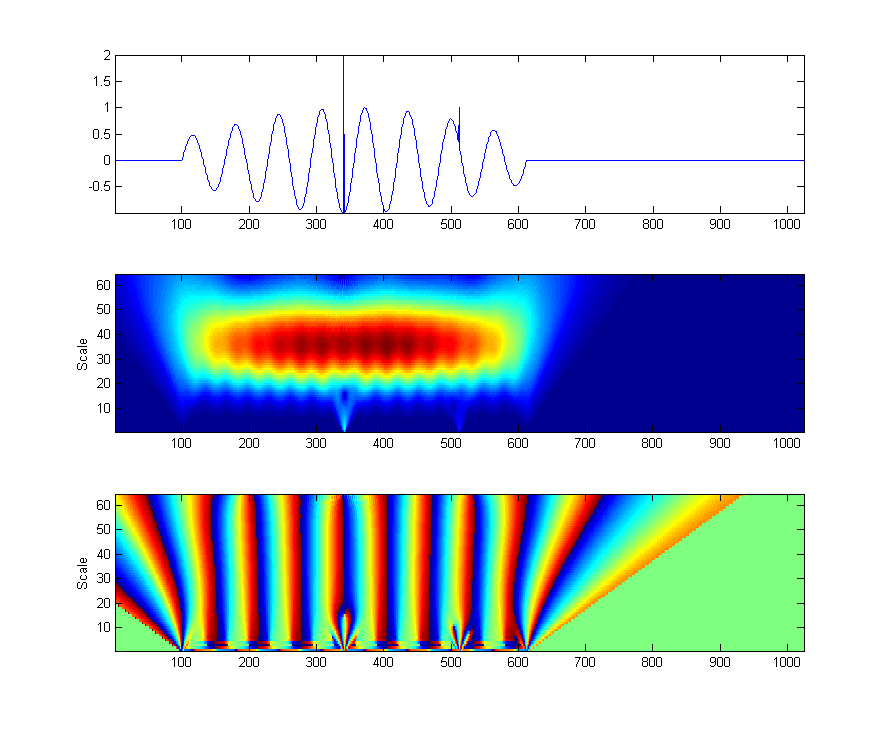 Coefficients at discontinuities (in the signal, the derivatives, etc.) spread in cones of influence. This is well-described in many wavelet books. The situation is even more complicated when you discretize the wavelet plane: one should project the samples with prefiltering, take care of the discrete wavelet symmetries and the level of redundancy. Remember for instance that the DWT is not shift-invariant. Hence, the mask could change a bit.

The resulting "regions of influence" were later used in A Nonlinear Stein-Based Estimator for Multichannel Image Denoising: the shape of the mask (across scales and subbands) defines a Reference Observation Vector (ROV), on which we estimate the "denoised" coefficient, based on generalized thresholding expressions.

The above was used primarily for denoising, but similar reasoning could apply for adaptive filtering, restoration, segmentation, etc.

Not the answer you're looking for? Browse other questions tagged matlab wavelet dwt or ask your own question.