Can someone explain me the highlighted text parts regarding this image ?

Here is a pseudo-code of how it was created: 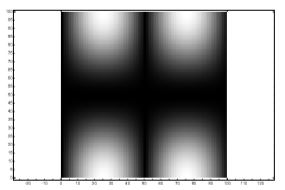 Let's think of the Fourier Transform of a continuous, periodic function: FT explains the function as a projection of the signal onto a sum of sinusoidal basis functions, i.e. correlates the signal with a bunch of complex sinusoids, each with its own frequency. Thus, any data point contributes to a sinusoid with a particular frequency - data is encoded into the frequency. Thus FT becomes discrete. Now inverse also holds: If the space is discrete, one would require a periodic FT to represent that (non periodic signal on one domain causes continuous signal on the other).

I really like this animation showing the continuous FT.

Mathematically, it is always possible to show that for DFT, $X_K = X_{K+N}$ where $N$ is the period such as in here.

I will greatly cite this stackexchange post and for completeness will include some shortened portion here:

Due to its definition, FT will generate symmetric responses for real data. Take the transform equation: $H(f) = \int h(t)e^{-j2\pi ft}dt$.

Now for the Nyquist part:

The Nyquist frequency represents the highest frequency that can be represented by the sampling rate (differs from Nyquist rate). The DFT of a real series, i.e. zero imaginary part, results in a symmetric series about the Nyquist frequency - this is where the signal folds. In the image you have given, the mid-part is exactly about where the symmetry is created. This is also where the DC component lies.

I hope these bring in some clarification.

Not the answer you're looking for? Browse other questions tagged fft filters discrete-signals fourier-transform lowpass-filter or ask your own question.

3
Low pass filter with DFT
5
New to DSP and having trouble filtering data
2
Why do Dyadic filterbanks downsample the high pass signal portions?
0
How to get the data (pointwise frequency, amplitude and phase) in a FFT performed on ImageJ?
1
should I apply low-pass filter when calculating central derivative?
1
Scipy butter filter - remove DC offset w/ high sample rate