Coherence bandwidth and coherence time in an OFDM system

Can somebody help me to understand this mathematically?

This diagram (from Molisch) shows the various Fourier relationships between measurements in wireless systems. 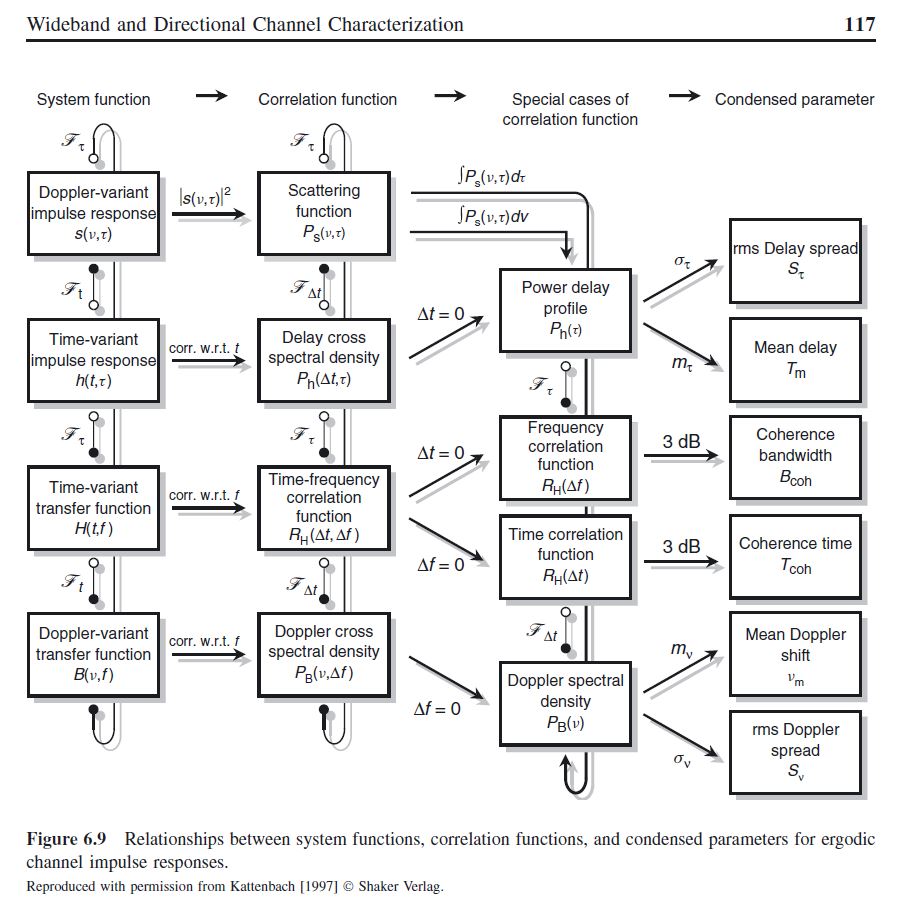 Are you looking for a somewhat intuitive explanation since you already have the basic mathematical definitions?

Coherence time is the time over which the channel impulse response does not change appreciably or decorrelate (with "appreciably" having different interpretations depending on what you're doing). The general idea is that if you are equalizing the channel in the receiver, the equalizer coefficients will not need to change significantly over the coherence time. If training intervals are required, the training intervals need to happen faster than the coherence time would indicate.

Likewise coherence bandwidth, for an OFDM system in particular, suggests that the frequency-domain equalizer coefficients over certain bandwidth spans will be similar. This is consistent with the definition you cited that the channel is essentially flat over the coherence bandwidth.

Both of these are statistical measures, however, as either can change quickly in a real channel and things like the spacing of nulls in the frequency domain is generally not constant.

The frequency response of the channel is the FT of the time-domain impulse response. So "coherence bandwidth" is related to the FT of the delay spread, and that delay spread is expected to stay correlated with itself over the length of the coherence time.

Hope that helps a bit.

Not the answer you're looking for? Browse other questions tagged ofdm or ask your own question.

2
Time-frequency synchronization algorithm for OFDM continuous stream
2
How to calculate bandwidth require for OFDM
4
OFDM transmitter bandwidth
3
Purpose of interleaving in OFDM systems
2
Coherence bandwidth/delay spread in OFDM
1
How to decide what subcarrier allocation should I use in OFDM?
0
Power of ICI in OFDM System
0
3G CDMA vs. LTE OFDM