Why does OFDM need cyclic prefix?

As I understand, by using multiple carriers, OFDM can mitigate the effects of multi-path delay as the symbol duration is larger than the delay.

In this case, why do we still need to add cyclic prefix in OFDM?

I have looked into several related threats but cannot find a clear answer.

The sinusoidal basis vectors of an FFT are only purely orthogonal over the whole length of the FFT. And orthogonality is required to be able to contain independent data bits that can be separated by an IFFT.

But if the signal block is cyclically extended, then the latter part of the signal block, after the multi-path effects from the block transitions have propagated, can be made long enough to fill the entire FFT length with uncorrupted orthogonal data. And the sinusoidal basis vectors can be cyclically extended while maintaining complete orthogonality over all full FFT length sub-segments.

This is because the DFT is circular. In the transmitter we modulate by treating data mapped to a complex constellation (such as QAM) as a single bin in the DFT, we can then group many of these bins together to effectively create a massive amount of narrowband modulations all in parallel. We would use the inverse DFT in the transmitter to create the result we would expect to have in the time domain, no different if we did actually did modulate multiple adjacent channels in parallel using classical time domain modulation approaches.

This results in one block of time domain data which is all fine and good until we transmit this block over a wireless channel with multipath delay. At the receiver we will get multiple copies with delays consistent with the "delay spread" of the channel. If we transmit multiple blocks one after the other, the delayed copies of each block will smear into the next ones, causing distortion that we can't easily resolve with the intended receiver implementation that uses FFT's to restore the constellations and finally the data. So a time buffer is needed between the blocks being transmitted to allow for the delayed copies to settle before the next block starts.

Now comes to rescue the consideration of the circular nature of the DFT: If we take the data that is at the end of a block of data and attach it to the beginning (and we will use the minimum amount of time allowed by the worst case delay spread expected), and then use that in the transmitter, then when we take the FFT of the actual block of data in the receiver, the beginning of the block will properly have the delayed copies of the same constellations that were at the end of the block. With that it is then feasible to completely correct / resolve the delayed copies and remove the distortion effects due to multipath.

The delay being less than a symbol duration does not mean there would be no distortion due to multipath, it just means we can get away with a simple "one-tap equalizer" for each constellation (simple gain / phase adjust) due to flat fading in each subchannel, given that we can have a complete copy of the delay components for the symbol. 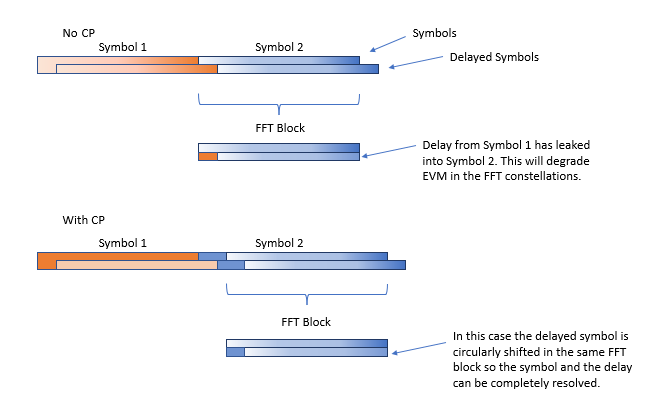 For further details, please refer to these posts:

12
How is symbol synchronization with OFDM done?
4
Alamouti code after or before IFFT block in OFDM
2
Coherence bandwidth/delay spread in OFDM
1
OFDM sensitivity to sampling time offset (with half of time interval between samples)
2
doesn't OFDM inherently deals with ISI? why cyclic prefix is needed?
0
OFDM RF signal waveform
1
What is the difference between a guard band and a cyclic prefix in OFDM?
0
Writing an OFDM modem - subcarriers are interferring