Suppose an OFDM transmitter with four subcarriers is implemented using the structure shown below.

If the serial data input rate is 40 bps, each parallel stream will run at 10 bps. Theoretically, the spectrum (assuming BPSK modulation for each subcarrier) of the IFFT output $x$ should look like shown below (the subcarrier carrier frequencies were chosen arbitrarily).

Each channel occupies a bandwidth from -10 Hz to +10 Hz around the subcarrier, resulting in a total OFDM null-to-null bandwidth of 50 Hz, as shown in the spectrum above.

However, the simulated spectrum of the IFFT output $x$ is shown below. Each input bit is represented by one sample (there is no reason to use more samples before the DAC).

One difference between the theoretical and simulated spectra is the difference in bandwidth. The theoretical spectrum has a bandwidth of 50 Hz, whereas the simulated spectrum has a bandwidth of 40 Hz. This can be explained by setting all IFFT inputs to zero, except one, and calculating the resulting spectrum. This process can then be repeated for each of the parallel inputs numbered 0 to 3 in the transmitter structure above. The four spectra are shown below. 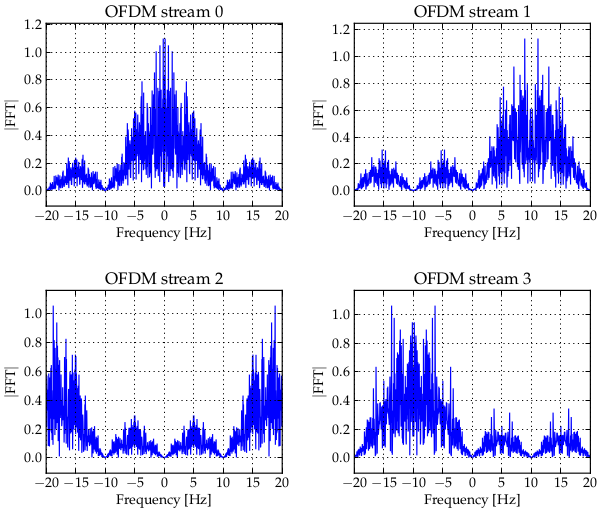 Clearly, each parallel stream contributes a bandwidth of 20 Hz, spaced at 10 Hz. This corresponds to the theoretical BPSK OFDM spectrum, except that stream 2 is located at 20 Hz which mirrors back to -20 Hz, with the result that the total bandwidth is 40 Hz and not 50 Hz.

The bandwidth has now increased to 80 Hz, which can again be explained by looking at the individual contributions of each of the parallel streams, shown below. 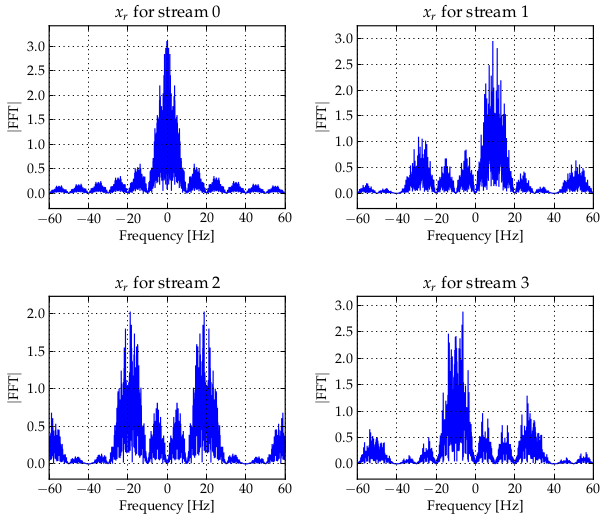 The spectrum between -20 Hz and 20 Hz in each of the subfigures above corresponds to each respective stream shown in the OFDM streams (before resampling) figure. The harmonics caused by resampling however cause the bandwidth to increase from 40 to 80 Hz.

What should the bandwidth of the BPSK OFDM signal be after resampling? Is it 50 Hz (according to theoretical graph shown), 40 Hz (simulated before resampling) or 80 Hz?

What should the bandwidth of the BPSK OFDM signal be after resampling? Is it 50 Hz (according to theoretical graph shown), 40 Hz (simulated before resampling) or 80 Hz?

What you call resampling is actually modelling D/A conversion with a discrete simulation system. Resampling consists of a repetition of every sample plus low pass filtering. Your D/A converter model makes sense but it should not be confused with resampling. The D/A converter can be described by convoluting the discrete time signal with some impulse response $g(t)$. In frequency domain this corresponds to a multiplication of $X(f)$ with $G(f)$ (where these are the Fourier transforms of $x(t), g(t)$). You chose $g(t)$ to be rectangular, so $G(f)$ is a sinc function. As $x$ is a discrete-time signal its frequency spectrum is infinite and so is $G(f)$. The first spectral nulls of $G(f)$ are at $-f_\mathrm{s}$ and $f_\mathrm{s}$. So from your plot it can be seen that a sampling frequency of 40 Hz has been assumed. The useful OFDM signal is in $[-f_\mathrm{s}/2,f_\mathrm{s}/2]$.

So to answer your question: after D/A conversion the spectrum of the OFDM signal is non-zero for arbitrarily high frequencies. To find the 3-dB bandwidth $B$ you have to find the frequency $f_0$ for which $G(f_0)=0.5$, then $B=2f_0$.

Should a filter be used to achieve the correct bandwidth?

Yes, after D/A conversion, a lowpass filter with cut-off frequency $f_\mathrm{s}/2$ should be used to attenuate the spectral aliases that are caused by the D/A conversion. This so-called reconstruction filter is generally required after D/A conversion and is not OFDM specific. In cases where signal bandwidth doesn't play a role it can be omitted.

How is OFDM typically implemented to ensure the correct bandwidth; should some subcarriers be set to zero? Should another DAC approach be used?

Remember that OFDM is a time limited system. And because of that you have infinite components in the frequency domain ideally.

Not the answer you're looking for? Browse other questions tagged fft signal-analysis digital-communications ofdm resampling or ask your own question.

2
Software-based sound card OFDM
1
Spectral location of individual OFDM symbols
3
Simulating noise in OFDM
2
Questions Downlink OFDMA in LTE
2
OFDM modulator in LTE
0
Questions regarding OFDM, FFT, IFFT
0
OFDM Transmitter knowledge
1
How to decide what subcarrier allocation should I use in OFDM?
0
Why is it that the input to an IFFT is first reordered in an OFDM Modulator