I am wanting to create a Kalman filter that can be used to track an object undergoing sinusoidal (lets assume simple harmonic) motion. I have seen many examples and implemented my own python code for a simple SUVAT equation/projectile motion case however I have been having trouble finding examples where a Kalman filter is used to track an object moving with sinusoidal motion and I have been having trouble working out how to construct the State transition matrix (commonly called A) and the Control matrix (commonly called B) to model such behaviour.

This will eventually be used to track a noisy voltage signal corresponding to the position of an oscillating object such that one can recover it's 'true' motion.

I would appreciate if someone could direct me to some useful resources where I could learn how to do this or explain how I might go about doing this.

Assume that the amplitude remains constant as well as the angular frequency $\omega$. The phase will be predicted using $\phi_k=\phi_{k-1} + \omega T_s$

The measurement matrix usually denoted as H and is the Jacobian matrix or the first derivatives matrix of the model with respect to the state variables. B will be the all zeros matrix. 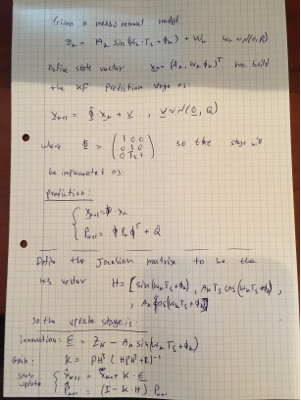 Not the answer you're looking for? Browse other questions tagged python kalman-filters or ask your own question.

1
How to get rid of noise and oscillations using Kalman filtering
13
Will an Unscented Kalman Filter Be "As Good" as Other Optimization Algorithms for This Problem?
5
Tracking a Sine Wave with Kalman Filter - How to Account for Offset (DC Signal)?
4
How to include phase in a sinusoidal Kalman Filter
3
In Kalman filters why is it necessary to transform the systems dynamics matrix to the state transition matrix?
1
Suggestion for a DSP board to implement a Kalman filter in real-time at a rate of around 4MHz or higher
2
How to account for multiple signals in the input to a Kalman filter
4
Frequency tracking with huge noise
4
Using the Kalman filter given acceleration to estimate position and velocity