From what I have studied so far I have understood that the benefit of a lock in amp is its ability to resolve the amplitude of a signal which is deep into noise.

I was wondering if the same concept can be used in order to resolve the amplitude of a signal which is very close in frequency to a higher amplitude signal, assuming that your amp can lock precisely to the frequency under consideration.

The lock-in amplifier (LIA) is simply the multiplier and the RC LPF. (Of course, this is the simplest version!) The reference waveform is a squarewave exactly (deliberately) synchronized with the signal waveform. Since the frequency and phase of the signal sinewave are known, all that remains is to estimate the rms value, which is $(2/\pi)$ times 10 mV, i.e., about 6.366 mV.

The next figure shows the raw input, for the first 2.5 s, to the LIA: 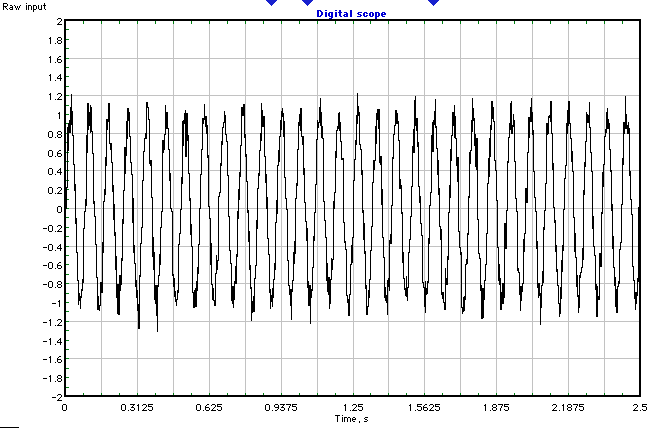 The next figure shows the LIA output (cyan), the long term average (red) and the N = 1200 point running integration (green). 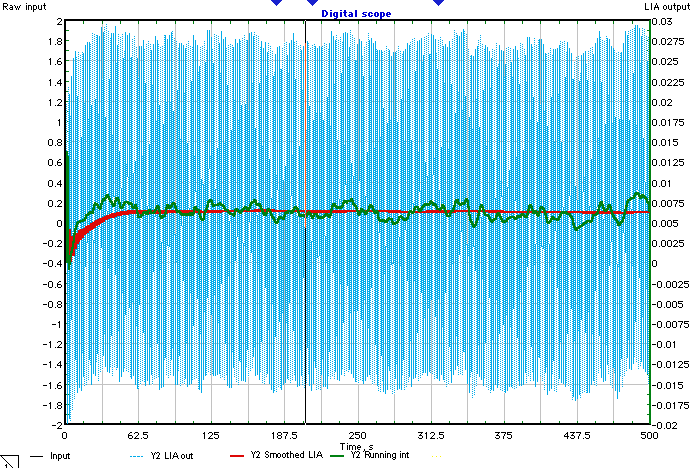 The last figure shows the last 20 seconds of the previous figure's results (same colors for the respective outputs). 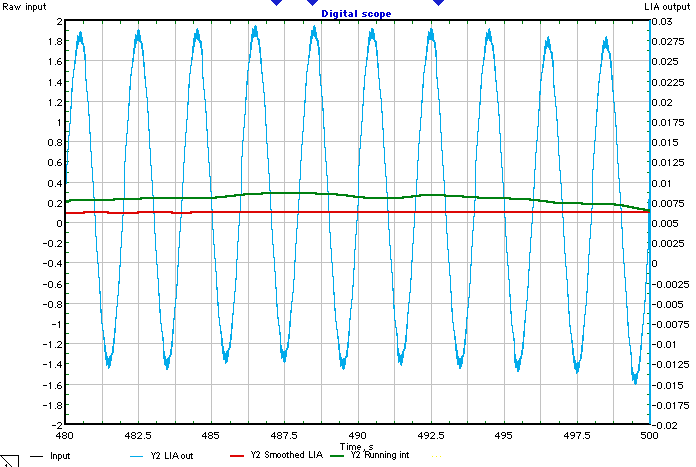 The final value (at t = 500 s) of the long term average (red trace) was 6.22 mV and the final value of the N = 1200 point running integration (green trace) was 6.39 mV. Note in the last figure that the noisy sinewave is at 0.5 Hz, i.e., the difference frequency between the 12.5 Hz squarewave reference frequency and the 12 Hz interfering sinewave. The sum frequency, at 24.5 Hz, was largely attenuated by the RC LPF, since the -3dB frequency was roughly 0.016 Hz

Note added: The product of the 12.5 Hz signal sinewave and 12.5 Hz reference squarewave generates a sum frequency of 25 Hz (largely attenuated by the RC LPF) and 0 Hz, i.e., DC. The RC LPF passes that without attenuation. Also, it is easy to replace the simple RC LPF with a higher order low pass filter having steeper roll-off. This was not necessary in this simple example, but if the interfering sinewave had been closer to the signal sinewave, or if the interfering sinewave had some frequency jitter, then a better LPF would be needed.

Lock-in amplifiers work precisely because they measure the amplitude of a signal at a very particular (i.e. narrow band) frequency, and phase (though some automatically will measure both phases for you). If you have a narrow band signal with an SNR much less than one, the noise is still spread around a lot in frequency space. By picking that one narrow frequency and ignoring everything else, you throw out 99.99...% of the noise. As long as your signal is very narrow band (all concentrated at that exact frequency),then you don't throw away any signal. So the SNR goes up by 10^3-10^6, and suddenly it's good enough to measure your signal.

So, the whole point is you need a narrow band signal, and you need a frequency reference centered right on the frequency of what you are trying to measure. In the case you presented you have a good signal A, and a bad signal B that is offset from reference A. The offset means you can't use A. But, if you know exactly what the offset is, you could generate a third signal C, and lock it to A at the known offset (simple enough, but beyond the scope of this answer), and then, yes, you could use lock-in amplification to measure B using C as a reference.

Not the answer you're looking for? Browse other questions tagged frequency-spectrum frequency amplitude or ask your own question.

27
“Complex sampling” can break Nyquist?
10
On the de-noising of time-frequency images
4
What should the amplitude be when plotting 1-sided Amplitude Spectrum?
3
Estimation of the amplitude of a frequency component in a signal
2
Analyse audio/music frequencies without STFT, at 1/f temporal resolution, using probe phasors at logarithmically-spaced frequencies, O(N log N)?
5
1/3 Octave Analysis
0
FM demodulation amplifier with saturation
2
The relationship between downsampling and frequency resolution
0
Efficient calculation of exact frequency from a broad frequency range (1 Hz - 1000 Hz)