Using Matlab's ndwt2('chess.jpg', 2, 'haar') function on the chess board , I obtained the other 7 images in the album. (Link to the album given in the end)

This is where I have problem. What does A, H, V and D details of the image mean?

Also, how come is 1st image in the album approximation of the chessboard (assuming approximation means a rough estimate of the image) ? It just has lines where the borders of chess boxes are there. How is that an approximation, or have I understood it wrong?

I was doing the mistake of converting the datatype of image returned by ndwt2 (which is the double datatype) to uint8.

these are the images that I now get.

This was not the case previously, there H had exclusively vertical lines, V had only horizontal details, D was blank.

One can implement the standard discrete wavelet transform (DWT) on an image (dwt2 in Matlab) with a series of filtering and decimation operations, on the rows and the columns. And the wavelet by itself results from the iteration at different levels.

Start with the Haar wavelet. In 1D, it can be implemented by a series of sums and differences ($[1,1]$ and $[1,-1]$ filter) on $2$-pixel sets. If you combine these two filters on the rows and the colums, you get $4$ possible combinations. They are illustrated in the four $2\times 2$ matrices. 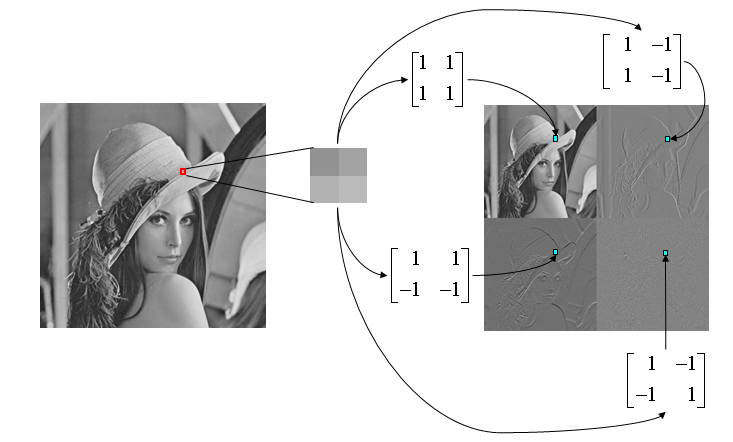 So take the small $2\times 2$ block from the hat (left image). If you sum the pixels on the rows and the columns, you globally sum all four pixels. That gives you the top-left cyan on the right image. If you repeat the process on all $2\times 2$ blocks, you get the top-left small image, often called the approximation at level 1 (A1). If you apply $[1,-1]$ on the rows, and sum the columns, you get the top-right small image. The difference along the rows detect some vertical details, as you can see (more or less vetical edges). It is called vertical details at level 1 (V1). Now, if you apply $[1,-1]$ on the columns, and sum the rows, you get the bottom-left small image, which detects some more of less horizontal details, called H1. The bottom-left small image computes differences on both rows and columns. It is called D1 for diagonal, though it is not very precise, in general, at detecting $\pm 45°$ edges.

There, you have A, H, V and D. A standard DWT further decomposes the small top-left image. With the same reasoning, you get approximation, vertical, horizontal and "diagonal" details at a second level (the $2$ in your comand):A2, D2, H2, V2.

Here, we have taken separate original $2 \times 2$ blocks. Another word for it is decimation, by $2$, after each filter pass.

Wiht ndwt2, the main difference is that you do not decimate, it is like taking blocks with overlap. So, normally, the A, V, H, D images look about the same, except they have almost the same size as the original (up to border effects and extension).

I am surprised by the apprroximation you show. Indeed, I believe there is a read or format issue with it. Open it with an image editor, save it again an a new JPG or PNG seems to fix the problem.

Not the answer you're looking for? Browse other questions tagged image-processing wavelet transform or ask your own question.

17
What image-processing techniques are ideal for this particular shift/scale invariant template matching?
3
An alternative algorithm for blob detection
1
Is there a better Fourier Transform-based algorithm to use in Image recognition
1
Output of MATLAB's two-dimensional DWT function $\tt dwt2$
10
Auto Detection of Rotation Angle on Arbitrary Image with Orthogonal Features
0
Detect lines transitioning to blobs in images
0
How to estimate the modulation transfer function of images?