How do I implement a nonorthogonal quadratic spline wavelet into discrete wavelet transform?

I am trying to use the discrete wavelet transform for signal processing (time series data from a plant). I would like to use a mother wavelet that is not in Matlab. Mallat and Zhong 1992 described a nonorthogonal quadratic spline wavelet I would like to use. They name some coefficients and impulse responses, but I'm not sure how to use these (reference below). To detect and treat abnormal sudden changes, the wavelet must satisfy a very particular property. We call a smoothing function any function θ(x) whose integral is equal to 1 and that converges to 0 at infinity. This function must be twice differentiable and define ψ_1 the first order derivative and ψ_2 the second order derivative.

The wavelet transform is computed by convolving the signal function f with a wavelet function (dilated at a scale s).

The extrema points of the first wavelet transform (WT) gives us the zero crossings points of the second WT. The extrema of W_s^1 f(x) and the zero-crossings of W_s^2 f(x) are the inflection points or the sharp variations points of f(x) smoothed by θ(x).Those edges in the signal can only be found if the wavelet is the second derivative of a smooth function. Furthermore, the first- and second-order WT are used in the detection of steady-state periods.

So I would like to code a quadratic spline wavelet function and a cubic spline scaling function like those in Mallat and Zhong (1992) article. Could anyone help me ? 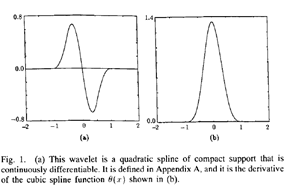 I would think it is available in the Matlab codes from the Wavelab toolbox. It hosts codes for papers and books. Especially, there is a directory \Wavelab\Books\WaveTour\ for Stéphane Mallat's book: A Wavelet Tour of Signal Processing. You can check images chapter by chapter from A Wavelet Tour/Images. Those images can be regenerared. For instance, from Chapter 5, Wavelab codes in \Matlab_Wavelab\Books\WaveTour\WTCh05 say from instance in wt05fig04.m:

disp('The dyadic wavelet is a quadratic spline with one vanishing moment.') disp('These graphs display the modulus square of its Fourier transform') disp('dilated by 2^j for 0

which may suit your needs.