where is the matched filter being used exactly in Rx PHY?

so I have two questions : Q1: Where in Rx PHY is the matched filter being used exactly? Q2: If matched filters are used in demodulator as I expect, how is it implemented for a complex demodulation scheme (i.e., 64-QAM).

Q1: Where in Rx PHY is the matched filter being used exactly

Not at all / it is a rectangular filter.

802.11a is an OFDM system, and that means it's a multi-channel thing – it divides the wide channel into many narrow channels, each of which is flat, i.e. only a single complex coefficient. It uses a rectangular pulse shape on each of these.

Thus, there's no matched filter explicit anywhere in the receiver.

When you further your study of modulation techniques, you'll learn why OFDM has to use a (in time domain) rectangular filter for each subcarrier (because that achieves the zeros in frequency domain that make the "O" in OFDM).

Q2: If matched filters are used in demodulator as I expect, how is it implemented for a complex demodulation scheme (i.e., 64-QAM).

Filtering is not part of the symbol decider, but comes before it (in systems that, unlike OFDM, do make use of it), after the downmixing (if applicable).

A matched filter is simply a correlator, where we are correlating the received sequence to the (complex conjugate) of we are expecting to receive, over one symbol period. Correlation is the process of multiplying and integrating (digitally that would be accumulating), and thus we get a weighted average prior to making a decision on what symbol was received.

In this case the expected symbol is a uniform pulse with no additional modulation characteristic, so the matched filter is a simple average of all the samples over that symbol period. (Sometimes this is depicted as an "integrate and dump" which performs that averaging function by accumulating and then "dumps" the result, resets the accumulator and accumulates the next symbol.). The following will however describe matched filtering in general for other cases where further complexity is of benefit.

Note that a matched filter performs optimally in the presence of white noise (noise that is stationary, identically distributed and independent (IID) from sample to sample). It is not the best solution for other noise types.

To see what is happening "under the hood" observe when you add two stationary IID random variables with a non-zero mean (the mean would represent the Signal, and the rest is the Noise). In this case the Signal would double, but the noise magnitude as measured by its standard deviation would only go up by $\sqrt{2}$! When you add multiple IID random variables N times, the standard deviation goes up by $\sqrt{N}$. Therefore you obtain a processing gain in SNR to the extent that the noise from one sample to the next is still independent. (If you look at that in the frequency domain you see that you are simply filtering out of band noise--- when the noise is no longer white, meaning one sample to the next is dependent, then you are only dealing with noise "in -band" and would achieve no further benefit.

A simple 3 sample example of this is demonstrated in the figure below where we see 3 samples of a phasor rotating counterclockwise depicted as y[n]. Consider that to be the symbol of interest, and the dashed line circle around it represents noise that is also present. To do a matched filter (correlation) we would multiply by the complex conjugate and accumulate the result. Here we see clearly the reason for the "complex conjugate" when dealing with any waveform that has complex values: When you multiply phasors, the angles add, so the product of a phasor with its complex conjugate will always have a zero angle, and thus the product is rotated to the real axis. By rotating each sample to the real axis, we can maximize the signal component of each sample (as they would all be in phase), so in this case increases by a factor of 3, while the noise would still go up only by $\sqrt{3}$.

When the magnitude for the symbol of interest is shaped, the matched filter will weight the strong symbols more than the weak symbols in accumulating to a final output SNR, and in doing this by using the magnitude of the symbol as the weight will optimize SNR in the presence of stationary IID noise. 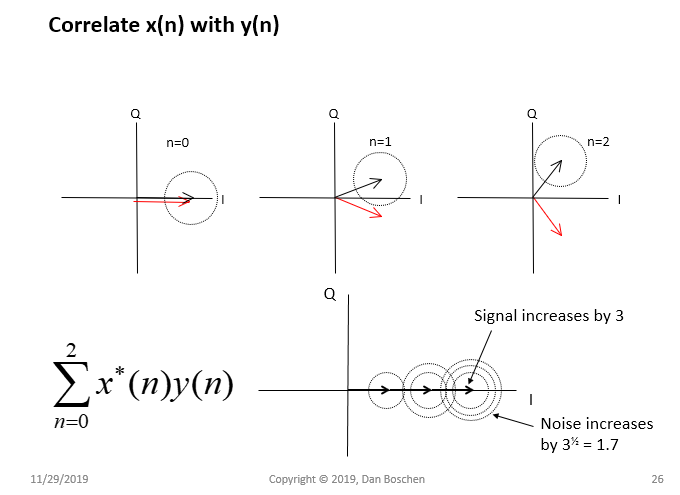 Not the answer you're looking for? Browse other questions tagged matched-filter or ask your own question.