Ratio of expected values of squares of errors in power quantities, in dB

An amplitude quantity $a$ is estimated by two estimators $\hat a_1$ and $\hat a_2.$ The error of estimator $\hat a_2$ is compared to that of $\hat a_1$. One possible comparison is the ratio of expected values of absolute error:

This is a ratio of amplitude quantitities and can be expressed in decibels as:

Another possible comparison is the ratio of expected values of square error:

This is a ratio of power quantities and can be expressed in decibels as:

The squares of the estimators can be used to estimate $a^2.$ The estimators $\hat a_1^2$ and $\hat a_2^2$ can be compared by the ratio of expected values of square error:

This is a ratio of squares of power quantities. How should it be expressed in decibels?

where the square roots are power quantities, or is there no commonly agreed convention?

Your question raises many very present concerns about measuring differences, and optimizing, in signal/image processing. Measuring can help:

Most use cost functions related to $p$-norms (when $p\ge 1$) or quasi-norms (when $0<p\le 1$): $$\mathcal{C}_p(a,\hat{a})=\left(\sum_k|a_k-\hat{a}_k|^p\right)^{1/p}\,.$$ Those functions are symmetric, and are consistent with the physical units of $a$. The behavior of $\mathcal{C}_p$ depends on power $p$: classical norm inequalities tells you that $\mathcal{C}_p(a,\hat{a})\ge \mathcal{C}_q(a,\hat{a})$ when $p\le q$. Those (quasi-)norms are $1$-homogeneous. Using different $p$ or $q$ can be useful, especially in a sparsity context, see for instance references in: Euclid in a Taxicab: Sparse Blind Deconvolution with Smoothed \ell_1/\ell_2 Regularization. Here is a rendition of classical penalties: 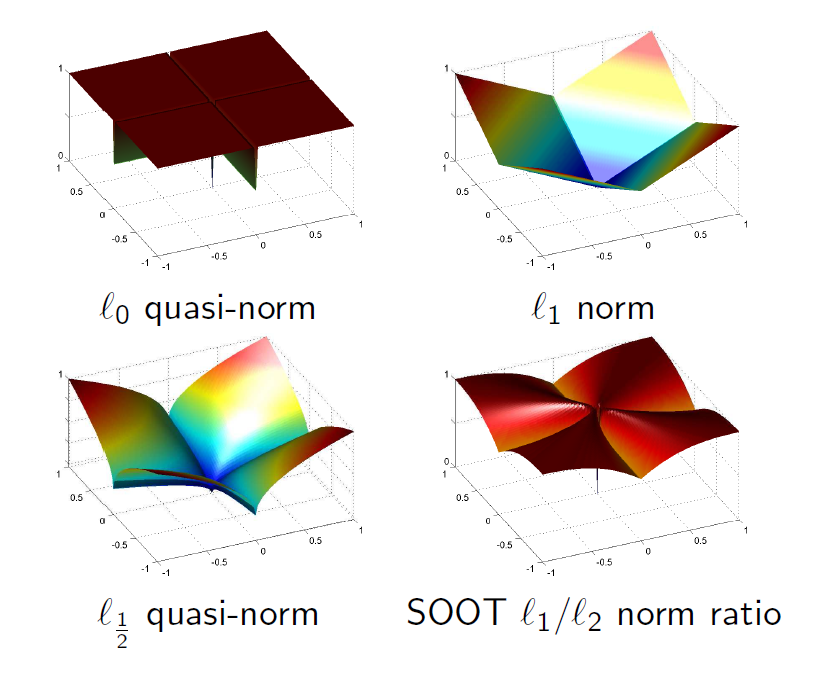 Thus, quasi-norm or norm ratios are used to compare estimates, in a unitless fashion. The $\ell_p$ signal-to-noise ratios are typically of the shape:

They are unit-less (ratios of same units). To better express orders of magnitude, one usually take logarithms. The logarithms can also been interpreted as unit-less measure. Interestingly, either $\log$ or $\ell_p/\ell_q$ ratios (like $\ell_1/\ell_2$) have been used a non-convex penalties in signal restoration.

Your functions with power $\alpha$ can be written as:

Now, those logarithms of ratios are unit-less, and are usually employed in a relative way, for comparison only. With $B>0$, $b>1$, $t \to B \log_b (t)$ is a monotonic increasing function. So, for value comparison only, we don't really care about the values for $b$ and $B$. However, for consistency in dB scale (as Olli Niemitalo already answered properly), signal-to-noise ratios tend to be computed in $10\log_{10}$ of energy measures, so homogeneously:

make sense. However, it is not easy to compare them objectively, but they can be plotted on similar graph.

Not the answer you're looking for? Browse other questions tagged estimation approximation notation or ask your own question.