Let's imagine that we have interconnected in cascade $L$ binary symmetric channels each with the same transition probability $p(y|x) \in \{p, q=1-p\}$, where the output of each BSC is connected to the input of the next.

The overall channel is also a BSC channel, but what happens as $L \to \infty$?

A binary symmetric channel (BSC) can be characterized by its complemented probability $p$. Its well-known capacity is

where $H(p)$ is binary entropy function: 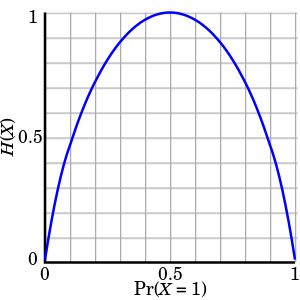 A $L-$concatenated BSC, which is also a BSC characterized by $p_L$, can be visualized as in the figure below

The complemented probability $p_L$ is derived

Conclusion: if the unit BSC is not certain $(p \neq 0, 1)$, the capacity of infinitely-concatenated BSC tends to $0$.

This answer is a bit late, but the problem has quite an elegant solution based on the Fourier transform and I wanted to add it.

The distribution over the output, $Y$, is a convolution of the quantities $P(X)$ and $P(N)$,

This is a linear transformation of the probabilities. The circulant convolution matrix obtained from one of the vectors is diagonalized by the 2x2 DFT Hadamard matrix,

where the second element of the result vector represents the probability $P(N_1 \oplus N_2 \oplus N_3 \oplus \ldots \oplus N_L = 1)$, which is the flip probability for the cascaded BSC.

Not the answer you're looking for? Browse other questions tagged digital-communications statistics channelcoding random-process communication-standard or ask your own question.