Relationship between information retrieval and source separation in signal processing

The image shows that the observation is a vector $\mathbf{y}$ and is referred as incomplete data and $\kappa$ = $(\mathbf{x, y})$ as complete data. When $\kappa$ is available, maximum likelihood estimation can be performed to determine both source state information (SSI) and channel state information (CSI) at the decoder side. In a coded communication system, the incomplete data $\mathbf{y}$ is the only available observation to the decoder.

I want to understand how the task of information retrieval or image recognition can be viewed from the perspective of source estimation, channel estimation, equalization. In the first picture of the link, 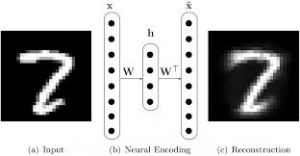 it seems that the pipeline (b) can be replaced by a communication system; the mapping $h()$ looks like a channel or a filter.

How can I formulate the information retrieval or the recognition task using the idea presented in the image ?

Is it possible to view information retrieval as encoding and decoding task? Whether the two tasks are the same but called differently.

As in the task of information retrieval, where the information is the input $x$, the trained or the learnt model should be able to produce the almost exact output in response to a query. However, there is a block, a mapping function that transforms the input to a representation involving $L\ll D$ bits. I think that training involves estimate the channel coefficients (synonymous to the weights in neural network).
As mentioned under the Question, the input data is in binary and the output is also in binary with $L \ll D$. If the distribution of the impulse response is Gaussian with $L$ number of coefficients and the length of the input is $D$, then applying the concept of autoencoders or the specific task of classification, where given the input the output of the system should be able to give an exact representation of the input, roughly $\mathbf{y} = \mathbf{hx}$. But, $L\ll D$ and I want that in response to an unknown input, the learned system should be able to give as output the exact input.

There are, a few discrepancies that might be making a difference here. My suggestion would be to edit the question for clarity. There are quite a few assumptions that lead to non-straightforward thinking about the problem which I have tried to address to an extent and I would be happy to modify the response in light of more information.

This is a very specific example of a classifier. It looks like it can only accept a vector of binary features and output an activation vector. In general, a classifier is a mapping. It takes features from the feature space (set) and maps them to the class space. It would therefore look like a simple $f : X \rightarrow C$ where $X$ is the feature space and $C$ is the class space. Elements of $X$ could be tuples describing each example's features and $C$ could well be $C \subset \mathbb{Z}$ (a subset of positive integers). If you have more than one outputs, then $C$ would also become a set of tuples.

You could extend this to say $C = f(X, \Theta_f)$, to include a set $\Theta_f$ of parameters that are specific to the classifier $f$ and this could include some $w^T$. Again, this $w^T$ business is very specific. Weights mean one thing for Neural Networks and quite a different one for k-means clustering.

That's very specific again and it cannot be generalised. This is a very simple mapping and it has its limitations. What is described starts to look like Neural Networks however.

From signal processing viewpoint, $h$ is the system or the channel through which the input passes and at the receiver we can get the same output if the channel is noiseless. So, the classifier $h(\cdot)$ is the encoder.

Yes...and no. What has been described so far COULD be seen as a decoder. It could map tiny little waveforms or "words" to a zero / one output.

But in signal processing, the transmitted signal is convolved with the channel impulse to get the output. Assuming, the channel is modeled as Moving Average, my questions are:

In machine learning and classification task, the input ... [...] In signal processing, when the signal...

Can I please ask what is the motivation behind this attempt to create a parallel between these two disciplines? Different things. Different disciplines, different problems, different models, different objectives, different motivations. The whole "how is this called in Machine Learning because it's called differently in DSP" is not a productive discussion. "Observation" and "Measurement" are just terms. They could well be applied to the same things from the point of view of the scientific method too.

Would learning $h(\cdot)$ as a classifier imply that we are estimating the filter taps of the unknown channel $h(\cdot)$?

Yes. BUT! "Classifier" is very specific and the classifier you have been "building up" so far, does not correspond (as a model) to this question. Neural networks CAN be used for interpolation in which case, they could be seen as "low pass filters" and in THAT case, the network would be learning the weights (according to some criterion of what constitutes good weights, for example see this link). Another thing you might find useful is the LMS filter. It adjusts its weights based on a "known template".

Suppose, in machine learning the goal is to retrieve the information after the training phase.

No. The goal of machine learning is to train the model.

In response to a query the trained system returns the correct output, then, is this retrieval process correspond to Equalization that is information reconstruction whereby we want to get back an estimate of the input?

What needs to be estimated in unsupervised setting so that the output corresponds to the actual input?

If an "output" has to "correspond to an actual input" (i.e. we know both, but try to recover the mapping that links them) then we cannot be talking about unsupervised learning. This is supervised. You check where you are and where do you want to go and adjust the weights accordingly.

Can somebody please give a mathematical expression as how $h$ would perform as a classifier so that the learned system can reconstruct the information, and how this goal generalizes to encoding and decoding?

Please see above links on using neural networks for interpolation. Also, it would be useful if you were to clarify the original question with more information on what you are trying to achieve. Why does it have to be in the context of a "classifier" that works as an "encoder"? Reconstruct what information? How does this information look like? What is the point of encoding and decoding? The problem could have a solution involving neural networks but it is not entirely clear how.

I am going to leave the response largely unmodified because certain things do hold still and I am going to add a few points here in bullet points. I can see "where you are coming from" but it is not clear to me why are you trying to create a similitude with the communications field.

Not the answer you're looking for? Browse other questions tagged machine-learning self-study compressive-sensing channelcoding parameter-estimation or ask your own question.

12
Why do digital filters work?

2
What is the estimator used in this paper for system identification?
4
Design of equalizer for wireless communication
1
Source and channel encoding
2
Bose Chaudhuri Hocquenghem (BCH) vs Reed Solomon (RS) Error correcting codes and sound transmission channel modeling
0
Suggestions on how to use FIR model in sentence retrieval task
5
Compression Sensing for Blind Source Separation
2
Recommendation for courses / studies on digital signal processing