Response of a system to a step function (heaviside)

I'd like to compute the response to a step function of a electrical/thermal system. Generally I can "easily" compute the transfer function $H$:

Since the Fourier transform ($\mathcal{F}$) of the Heaviside function is (computed with WA):

To check my math I tried to compute the response for a simple RC system:

I should get the well known charge of the capacitor. The transfer function: 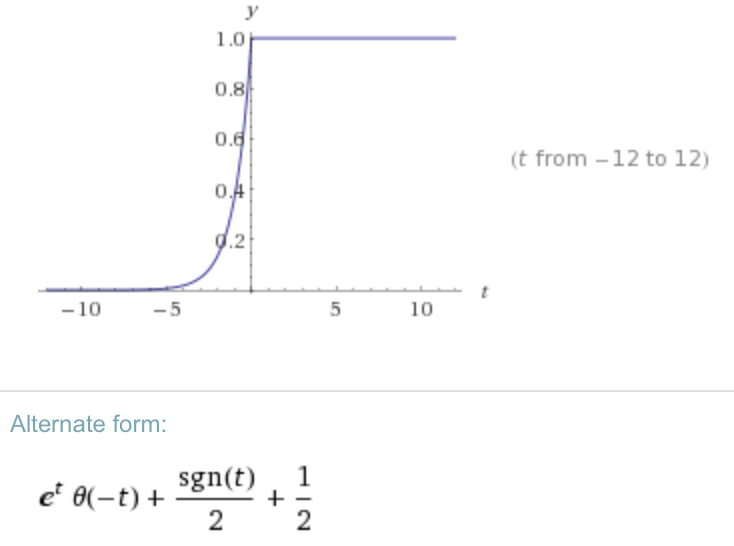 This would be correct if we were going backward in time :/. So the question is... What am I doing wrong?

I did the same using Laplace Transforms and everything works fine... But I don't understand why.

P.S. I don't want another method, I just want to understand what's wrong in my approach.

P.S. the reason why I am using WA is that for my more complicated system I need to compute the Fourier transforms using WA.

Apart from the factor $1/\sqrt{2\pi}$ (which makes the transform unitary), the actual problem lies in the sign of the exponent. You implicitly assume a negative sign, whereas WolramAlpha uses a positive sign.

There are two ways to solve the problem. Either you change Wolfram Alpha's default parameters using FourierParameters -> {1, -1} as explained here, or you change $H(\omega)$ accordingly, which means that you would need to use

As an example I tried the second method, and WolframAlpha indeed provides the correct result.

One more thing, for this kind of problems it's usually more convenient to use the Laplace transform because this avoids the use of generalized functions, such as the Dirac delta.

You are doing a mistake while converting $V_{out}(\omega)$ back in time. For your conveninence let me solve the problem. I will use a slightly different notation in which 'j' will represent imaginary numbers instead of 'i' and a factor of $\sqrt{2\pi}$ won't appear around.

Now, convert this final form back into time by recognising the first 2 terms as the CTFT of a unit-step u(t) signal and the 3rd term as the CTFT of an right sided exponential signal, and utilizing the linearity property of Fourier Transforms...

Not the answer you're looking for? Browse other questions tagged filters signal-analysis fourier-transform transfer-function laplace-transform or ask your own question.

3
Amplitude vs Frequency Response
5
Understanding $\mathcal Z$-transforms and pole locations
5
Applying a filter on an audio signal with Python
1
Cost function for LTI system identification
0
Inverse Fourier of Two-Pole Transfer Function
2
LTI system output given input and frequency response
3
Response of an ideal integrator to a cosine wave
0
How to do the Fourier Transform of bounded function?
1
Why does the unit step function not have infinite poles?