Why is random noise amplitude inversely proporional to the frequency?

http://astarte.csustan.edu/~tom/SFI-CSSS/info-theory/info-lec.pdf compares a bacteria DNA vs a random string:

My first step was to generate for myself a "random genome" of comparable size to compare things with. In this case, I simply used the Unix `random' function to generate a file containing a random sequence of about 4 million A, C, G, T. In the actual genome, these letters stand for the nucleotides adenine, cytosine, guanine, and thymine.

We want to find "interesting" sections (and features) of a genome. As a starting place, we can slide a "window" over the genome, and estimate the entropy within the window. The plot below shows the entropy estimates for the E. coli genome, within a window of size 6561 (= 3^8 ). The window is slid in steps of size 81 (= 3^4 ). This results in 57,194 values, one for each placement of the window. For comparison, the values for a "random" genome are also shown. 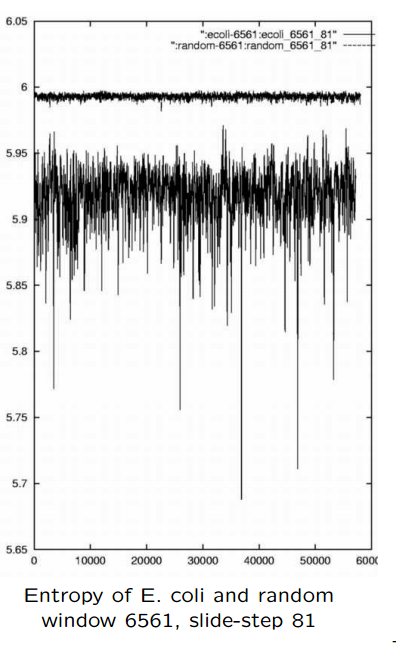 At this level, we can make the simple observation that the actual genome values are quite different from the comparative random string. The values for E. coli range from about 5.8 to about 5.96, while the random values are clustered quite closely above 5.99 (the maximum possible is log2 (64) = 6). 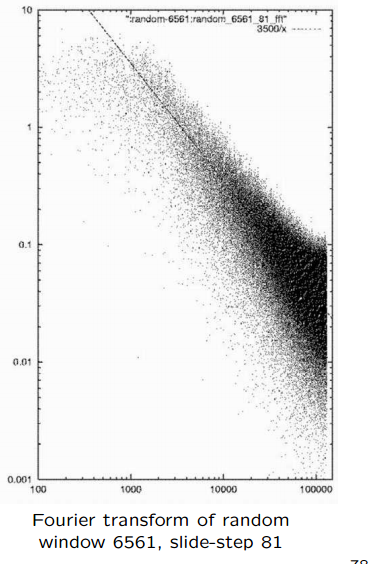 I must draw you attention that the fourier transform is applied to the entropy rather than to the random signal itself. Why is it expected that resulting spectrum is pink rather than absolutely random? I do not understand why it is expected that the random frequency amplitude is inverse to the frequency, why not $amplitude=1/freq^{1.5}$? The higher low frequencies mean that the next number has higher probability to be closer to the current one and random is not quite random, right?

I have also noted that, in the end of the book, author says that "random" is naturally band-limited by the power law, $1/f^\alpha,$ and, in SETI project, we better watch after the white noise because optimal use of the channel is a sign of intelligent life.

This looks like a pink noise model, where the power spectral density of the noise is proportional to $\frac{1}{f}$. This model is appropriate for some real-world phenomena; I can't speak to whether it's the right choice for this particular application.

Your interpretation of the meaning of this sort of spectrum is correct, although the noise is still considered random. Instead, we consider consecutive noise samples to be correlated with one another (in contrast to white noise, where all samples are jointly uncorrelated). That doesn't mean that the signal isn't random.

Not the answer you're looking for? Browse other questions tagged frequency-spectrum noise random or ask your own question.

10
Creating a spectrogram
1
How do I find the power of a specific frequency at a specific sample of a discrete time varying signal?
3
What is the entropy for these cases?
3
Numerically generating noise time series from spectral density
4
Optimal window function for amplitude estimation?
2
Confused on the difference between the frequency spectrum of an entire song, and the frequency spectrum of a point in time
5
In the formula for the windowed Fourier transform, why is the complex-exponential term not time-shifted to the position of the window?
0
Square Wave with Random Edge Shifting