What are some algorithms for generating a good pseudo-random approximation to $1/f$ (pink) noise, yet suitable for implementation with low computational cost on an integer DSP?

There are several. This site has a reasonable (but possibly old) list:

The first approach in Peter's answer (i.e. filtering white noise) is a very straightforward approach. In Spectral Audio Signal Processing, JOS gives a low-order filter that can be used to produce a decent approximation, along with an analysis of how well the resulting power spectral density matches the ideal. Linear filtering will always yield an approximation, but that may not matter in practice. To paraphrase JOS:

There is no exact (rational, finite-order) filter which can produce pink noise from white noise. This is because the ideal amplitude response of the filter must be proportional to the irrational function $1/\sqrt{f}$, where $f$ denotes frequency in Hz. However, it is easy enough to generate pink noise to any desired degree of approximation, including perceptually exact.

The coefficients of the filter he gives are as follows:

They're formatted as parameters to the MATLAB filter function, so for the sake of clarity, they correspond to the following transfer function:

Obviously, it's better to use the full precision of the coefficients in practice. Here's a link to what the pink noise generated using that filter sounds like:

Some judicious choice of sequencing for those sections, combined with some choice of gain factors for each section will be required to prevent overflow. I haven't tried any of the other filters given in the link in Peter's answer, but similar considerations would probably apply.

Obviously, the filtering approach requires a source of uniform random numbers in the first place. If a library routine isn't available for a given platform, one of the simplest approaches is to use a linear congruential generator. One example of an efficient fixed-point implementation is given by TI in Random Number Generation on a TMS320C5x (pdf). A detailed theoretical discussion of various other methods can be found in Random Number Generation and Monte Carlo Methods by James Gentle.

Several sources based on following links in Peter's answer are worth highlighting.

I have been using Corsini and Saletti's algorithm since 1990: G. Corsini, R. Saletti, "A 1/f^gamma Power Spectrum Noise Sequence Generator", IEEE Transactions on Instrumentation and Measurement, 37(4), December, 1988, 615-619. The gamma exponent is between -2 and +2. It works well for my purposes. Ed

If this attempt to add a screenshot works, the figure below shows an example of how well the Corsini and Saletti algorithm performs (at least as I programmed it back in 1990). The sampling frequency was 1 kHz, gamma = 1, and 1000 32k FFT PSDs were averaged. 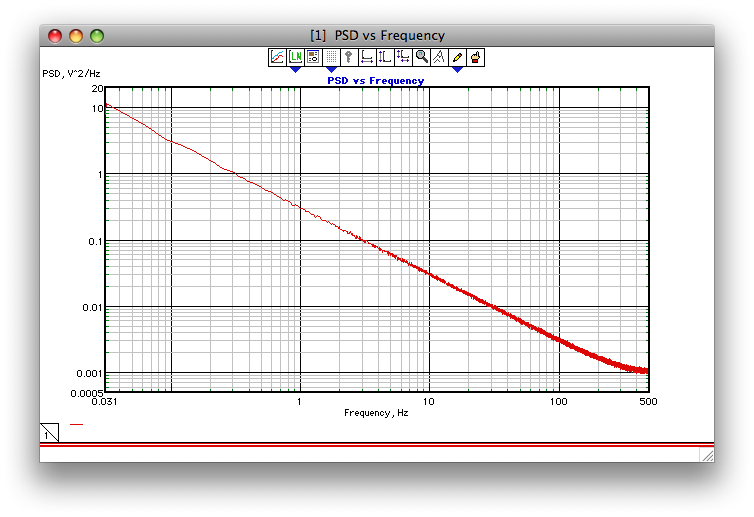 This follows up to my previous post on the Corsini and Saletti (C&S) noise generator. The next two figures show how well the C&S generator performs in regard to generation of low frequency (gamma > 0) and high frequency (gamma < 0) noises. The third figure compares the 1/f noise PSDs of the C&S generator (same as my first post) and the Example B.9 1/f generator given in Prof. Orfanidis’s excellent book (eqn B.29, p. 736). All of these PSDs are averages of 1000 32k FFT PSDs. They are all unilateral and mean-subtracted. For the C&S PSDs, I used 3 poles/decade and specified 4 decades (0.05 to 500 Hz) as the desired usable range. So the C&S generator had n = 12 pole and zero pairs. The sampling frequency was 1 kHz, Nyquist was 500 Hz, and the resolution element was just over 0.0305 Hz. Ed V 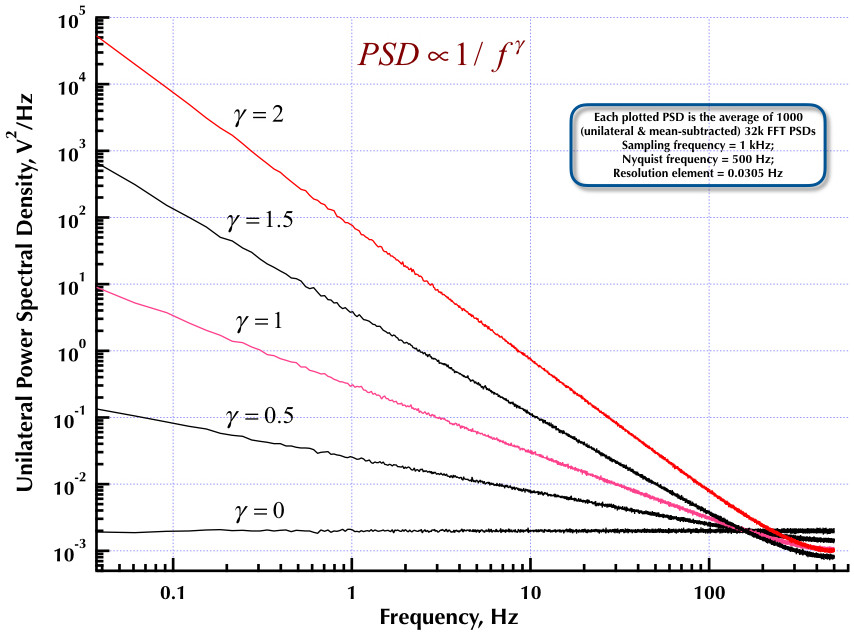 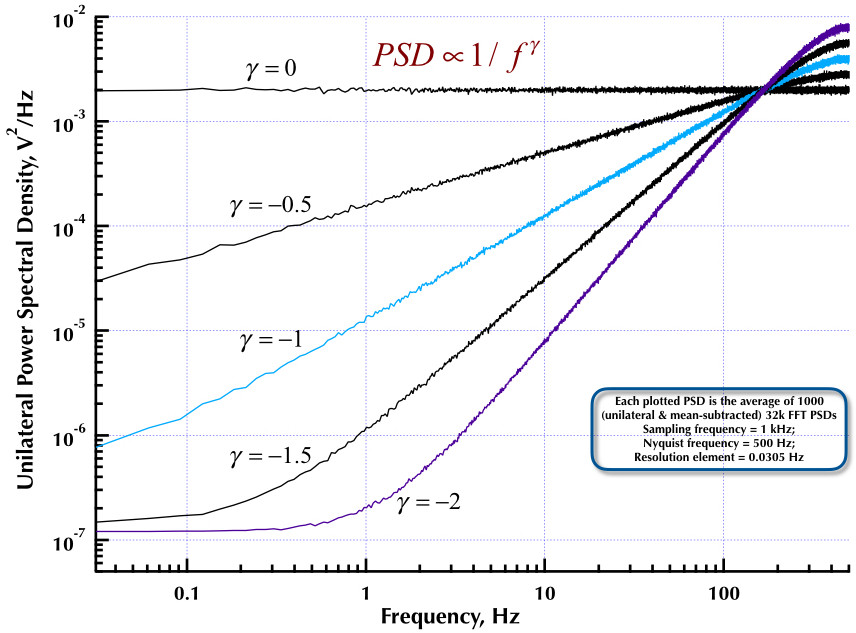 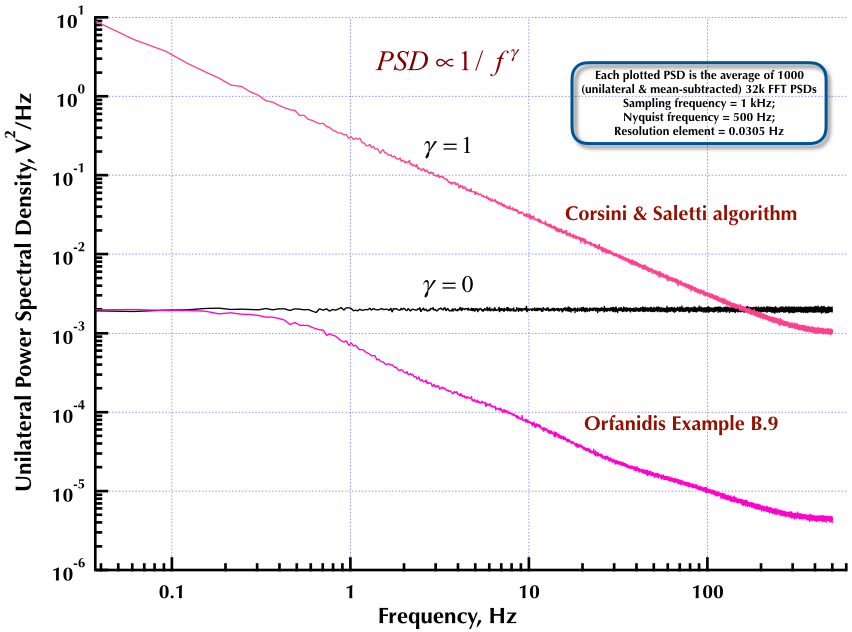 Not the answer you're looking for? Browse other questions tagged noise random or ask your own question.

0
how to create synthetic $1/f$ noise?
4
Filter coefficients for colored noise Voss Algorithm
2
How exactly does one apply a Hanning Window for a spectral estimate?
0
I often see here formula expressed in term of $z$. But what is $z$?
3
IIR filters with variable roll-off
1
How to design a variable slope highpass filter
1
Understanding Voss-McCartney pink noise generation algorithm
1
Identification of a transfer function
1
Voss algorithm and pink noise
1
Is a "Spectral Tilt Filter" the best way to get an arbitrary slope and cutoff LPF?
See more linked questions