In an audio file I would like to find calls of a specific bird specie, one that makes wobbling sound with rising notes. Can you recommend what would be the best audio feature to calculate in time or frequency domain to capture its essence?

Among others I tried MFCC, but the results were not promising (or perhaps my implementation poor) .

In this post I explained briefly the problem and included exemplary audio file with spectrogram: Example.

Here is another example. All marked areas contain kiwi (famous flightless bird from New Zealand) calls I am trying to identify. Mark that the original audio is very noisy; presented spectrogram is a result of applying high-pass filter and spectral subtraction on areas identified as noise-only. 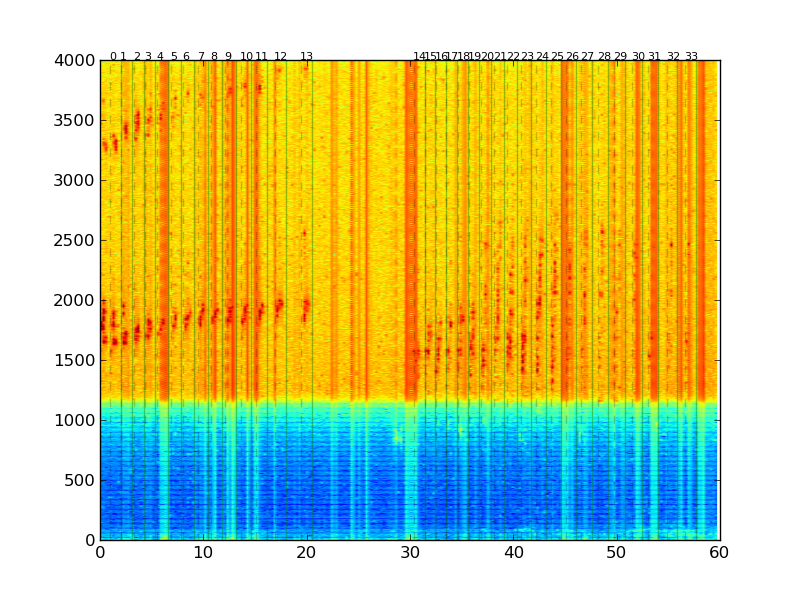 I would start with following set of parameters:

You should also include $\Delta$'s and $\Delta\Delta$'s of MFCC's and Spectral Flatness. They should really improve accuracy. You can also try to calculate these for other parameters. Having that, you can start with Gaussian Mixture Model or Support Vector Machine (I think that GMM will be suitable for that task). After training your model simply validate it on testing set (seems obvious but I've seen many projects where people tested their Machine Learning algorithms on training set with added noise or, what's even worse, same training data).

After this, you should perform Feature Optimisation. This is important part, as some of the features are irrelevant (i.e. Spectral Flatness for few first filter banks, while bird's chirp has higher frequencies). Nice publications with many algorithms for that purpose can be found here: click, click. Good luck!

I tried using chirplet transform (from MPTK library) proposed in one of the comments by visoft - with limited success I am afraid. Not that it was not working at all, but I have found much better approach.

Since the procedure is quite lengthy, those who are interested I invite to reading third chapter of a small write-up in PDF I created. In comparison to chirplets it is not only roughly 20x faster, but also more flexible, accurate and stable. It proved to be more successful in kiwi recognition than people who initially labelled the supplied data, which I did not think is possible. Here is a list of features I used:

The idea in essence is quite similar to what jojek was proposing, so +1 and my thanks!

Implementation details can be found on Github's project page. Hopefully it can assist other people in similar endeavours. Any comments, suggestions and questions are much welcomed both here and on the project's page.

I suppose you still want to isolate single calls that could be identified by that rising pattern. You'd have to find the peaks for that. Maybe you first identify and isolate the ,,pulses'', then find the frequency maximum of each and then have your program cut where there's a large downward step.

Not the answer you're looking for? Browse other questions tagged audio frequency-spectrum classification or ask your own question.

2
Pitch detection when successive notes are the same
18
Feature extraction for sound classification
1
Beat Detection with Arduino
0
How to emulate human sound recognition
1
Algorithm for testing input sound for multiple expected notes?
2
How to deal with audio with different length in Audio Classification
3
How can I convert audio to a series of notes using pitch detection?
0
How to difference a loud sound (playing notes), from a soft noise in spectrum. (Pitch detection with bass)