I am a man who lives in Northern California. My interests are digital signal processing, C++ programing, music, illustration, history, sociology, and literature. Before retiring I worked as a software engineer, and later had a small website (www.creativedetectors.com) to sell a few pitch detection applications for music which I had created.

Now being retired, I have decided to release the C++ source code for my Pitch Detection Engine within a free demonstration app called PitchScope Player. PitchScope Player is available on the web for free, and you can download the executable for Windows to see my algorithm at work -- detecting the notes of musical instrument solos upon mp3 files of your choosing. PitchScope Player is a MP3 player which can also do real-time note detection while you listen. The newly detected notes are animated upon a colored circular display while the Windows Midi Synthesizer plays the detected notes along with the music.

The link below to GitHub.com will lead you to my full C++ source code for Windows, where you could compile and view how I perform real-time Pitch Detection upon polyphonic mp3 recordings. 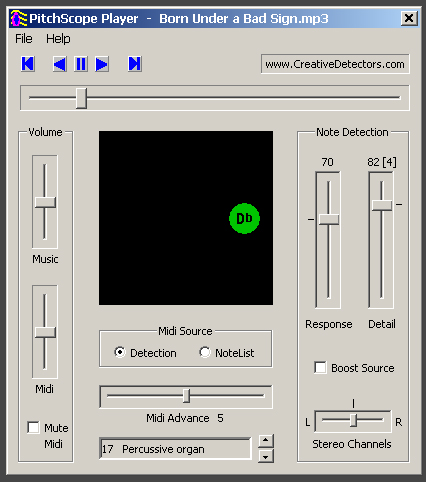 Some of my favorite books on Digital Signal Processing as it relates to the analysis of Music:

Digital Image Processing, by Rafael Gonzalez and Richard Woods, Addison-Wesley Publishing Company, 1992 (many of the DSP algorithms for the study of Image Processing are reused in the analysis of Audio and Music)

A 3 second Logarithmic DFT, created by my C++ code, from a Eric Clapton guitar solo on a polyphonic mp3 recording