I'm going to have to give a bit of context for this question to make sense.

I am working on a project which includes audio source localisation in 3-D space through TDoA (Time Difference of Arrival - from here called $\tau_{ij}$, between sensor $i$ and $j$) measurements. In other words I have $m$ sensors that each have a slightly different recording of the audio event. Via cross-correlation methods I can estimate the TDoA (or delay) between each pair of sensors.

With each pair of sensors, $i$ and $j$, we can point to the source position through the following optimization problem:

In other words, each pair of sensors generate a different hyperbolic surface. We then try find the position by minimizing the function (third equation), by varying $P_E$. For sure there will always be a $P_E$ where $\delta_{ij} = h(P_E,P_i,P_j)$, but it won't necessarily nullify the same equation for different $i$ and $j$. Therefore optimization is necessary. 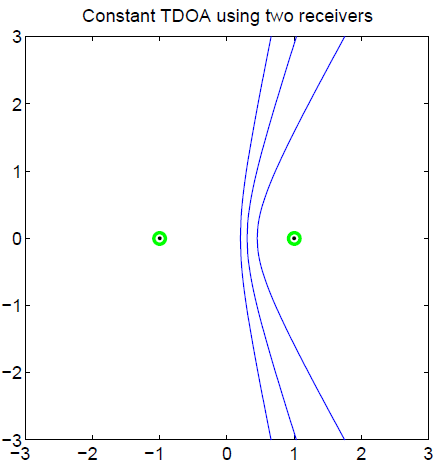 In a simpler 2-D example, the hyperbolic curves above represent points where the TDoA between two sensors is constant.

Finally, my question is: What is the best geometric arrangement of the $m$ sensors in 3-D space, so that measurements are as precise as possible? For example, a line of sensors is probably not a good idea as the the hyperbolic curves will be parallel to each other.

This will somewhat depend on the spectrum and properties of the signals and what your dominant source of noise, distortion, jitter, non-linearietes etc. are. Ideally you can resolve every point in space with 3 non-coplanar microphones. A very simple solution is one with 4 microphones: one in the origin and three one unit step displaced in x, y, and z dimension. The arrival difference between X and origin pair gives you the x-coordinate, etc.

You can improve this method by a simple least square approach that takes into account all microphone pairings (6 total). The fit error is metric of how much noise you have in the system.

Microphone spacing depends on spectral content of the signals you are tracking. If it's fairly narrow band you probably want them to be about half a wavelength apart so you maximize the phase difference between adjacent signals. A good robustness metric is something like dx/dt, i.e. you wiggle the arrival time a little and see how much the calculated position moves. For almost coplanar microphones that is a large number which indicates that this setup is very sensitive to noise.

Not the answer you're looking for? Browse other questions tagged optimization geometry or ask your own question.