How to Generate Band Limited Gaussian White Noise in MATLAB?

In some papers, I read that the additive noise is band limited Gaussian white.
How can I simulate this type of noise use MATLAB?

You would generate bandlimited Gaussian noise by first generating white noise, then filtering it to the bandwidth that you desire. As an example:

Just as a small addition to Jason's answer: usually you need to generate bandlimited noise with a given variance $\sigma^2$. You can add this code to the code given in Jason's answer:

Note that you have to do the scaling after filtering, because in general the filter changes the noise variance.

This result is valid assuming before sampling the continuous noise you applied an ideal LPF filter with bandwidth of $ f_{s} / 2 $.

Full description is given here - How to Simulate AWGN (Additive White Gaussian Noise) in Communication Systems for Specific Bandwidth.

Why can one not use the approach mentioned in this post?

It starts with the desired frequencies and works backwards to build the signal, instead of filtering. It uses python code, but also links to the original Matlab code.

Are there any drawbacks to doing it that way?

i realize this question popped up in current view because @Drazick modified his/her 2013 answer.

if you generate a good uniform p.d.f. pseudo-random number $x$ (say using rand() or frand(), if it's a good version) that ranges from 0 to 1 (that is $0 \le x < 1$), then if you do that 12 times, add up all 12 of the supposedly independent and uncorrelated values, and subtract 6.0 from that sum, you will have something that is very close to a unit-variance and zero-mean gaussian random number. if the uniform p.d.f. pseudo-random numbers are "good" (that is they exhibit independence from each other), this sum will be as "white" as you can get a discrete-time signal to be.

"white noise" is, of course a misnomer, even for analog signals. a "power signal" with flat spectrum all the way to infinity also has infinite power. the virtually-gaussian and "white" signal generated as described has a finite power (which is the variance and is 1) and finite bandwidth which, expressed as one-sided, is Nyquist. (so the 'power spectral density" or power per unit frequency is 1/Nyquist.) scale it and offset it however you please.

i s'pose i can edit this later and add some C-like pseudo-code to show this explicitly.

Producing full spectrum white noise and then filtering it is like you want to paint a wall of your house white, so you decide to paint the whole house white and then paint back all house except the wall. Is idiotic. (But has sense in electronics).

I made a small C program that can generate white noise at any frequency and any bandwidth (let's say at 16kHz central frequency and 2 kHz "wide"). No filtering involved.

What I did is simple: inside the main (infinite) loop I generate a sinusoid at center frequency +/- a random number between -half bandwidth and +halfbandwidth, then I keep that frequency for an arbitrary number of samples (granularity) and this is the result: 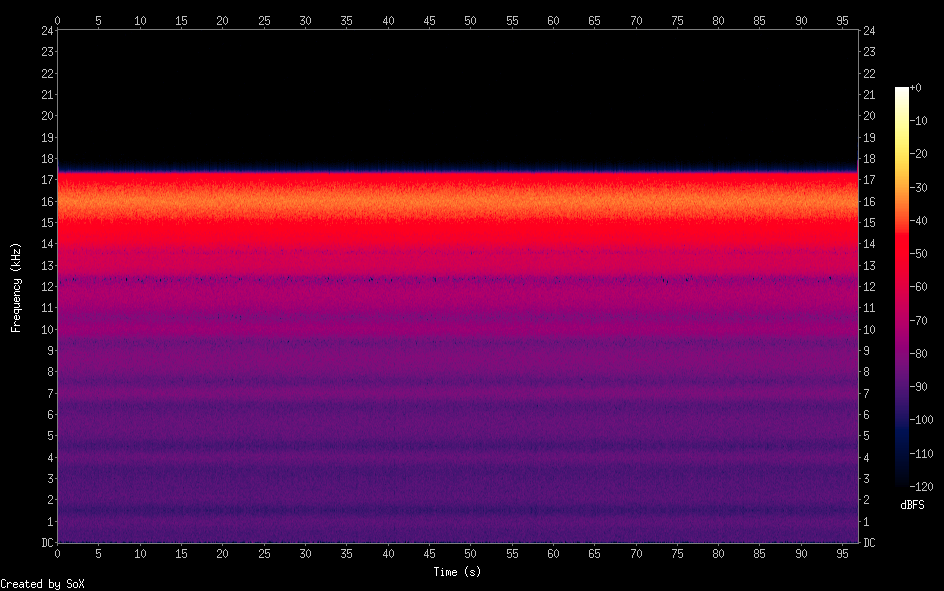 Not the answer you're looking for? Browse other questions tagged matlab noise gaussian or ask your own question.