How did Scientists Capture First Images of Molecules Before and After Reaction?

"Using a state-of-the-art atomic force microscope, the scientists have taken the first atom-by-atom pictures, including images of the chemical bonds between atoms, clearly depicting how a molecule's structure changed during a reaction. Until now, scientists have only been able to infer this type of information from spectroscopic analysis."

Are there any papers how this thing actually works?

The seminal paper you're looking for is:

Here's the short version, along with some speculation since I don't have their manuscript.

Atomic force microscopy (AFM) is a scanning probe microscopy technique, meaning a sharp probe is scanned in a raster pattern over/in contact with the sample. A probe my look like this. 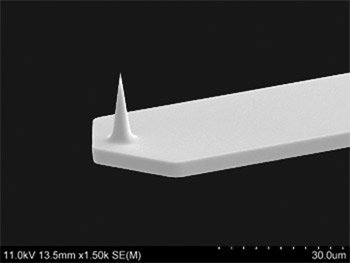 I will refer to the point as the tip, and that is where the carbon monoxide molecule mentioned in the article resides. The substrate the tip is attached to will be referred to as the cantilever.

A laser is bounced off the top of the cantilever, onto a dicrotic mirror, and finally into a photodetector, as shown below. 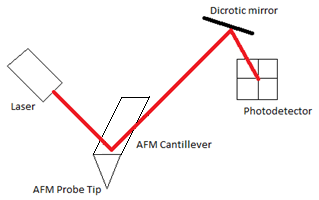 The researcher has control of the laser and mirror alignment. Alignment procedure is to place the laser centered, and as close to the end of the cantilever as possible, for the maximum deflection signal. The mirror is then adjusted to put the reflected laser on the most sensitive part of the photodetector.

The article mentions using non-contact AFM. That is about as meaningful as saying "we can the signal through a digital filter." There are multiple non-contact modes, but my guess (without having access to the manuscript) is they used a form of tapping mode.

The cantilever has a self resonant frequency, typically around 300 kHz. The cantilever is driven to resonance, and scanned over the sample. The deflection signal generated is an amplitude modulated version of the topography. It is also possible to obtain information about material properties this way.

That is the short version. If I get access to the manuscript or someone asks questions, I would be happy to add more information about how this system works.

1
Showing frequency and amplitude after doing an FFT on a signal
0
How to transmit voice signal and receive on radio?
1
What is QEEG technically, and how is it computed?
0
How the noise in time domain affect the power in frequency domain after FFT?