Information i can take from coeficient intensity map in DCT transform

What useful information i can take from the coefficient intensity maping after performing DCT transform? 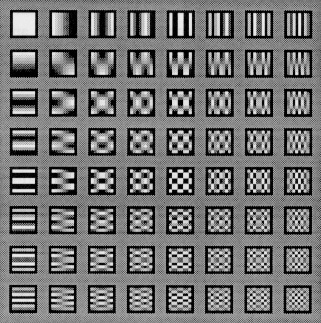 image-processing
share|improve this question
asked May 21 '13 at 20:24

The DCT is used in many places for its "energy compaction" properties. This is mostly useful in compression. For example, if I have a signal and I take its wavelet transform, then I can "compress" the signal by throwing away certain coefficients. These coefficients are not known before-hand. I have to look at the wavelet coefficients and then throw away all coefficients below a certain threshold to achieve some amount of compression with an acceptable loss in reconstruction accuracy.

For the DCT however, most of the energy of a signal is collected in its "low" frequency coefficients. What that means is that if you only keep the first lets say N coefficients (you don't need to store the locations of which coefficients you kept), you can get decent compression. In 2D, a "zonal" or "zig-zag" pattern is used to choose the coefficients to keep.

On a more fundamental level, the DCT is basically a linear combination of your signal as a bunch of discrete cosine waves. If you think of each cosine wave as an elementary building block, then the DCT tells you how much contribution to your image comes from a discrete cosine of a particular frequency.

3
Determining the resulting pixel value before creating a compressed JPEG image
2
Image-processing - Dequantizer
1
What technique can I use to remove useless information from an image?
0
What kind of information can we obtain from curvature for exemplar-based inpainting?
0
3D intensity map for grayscale image
1
Why Wavelet based Transform Is More Suitable for Image Compression Compared to DCT?
3
8*8 block matrix in JPEG image compression?
0
How we can use the Hadamard transform in feature extraction from an image?
2
How to zoom an image using DCT transform
1
DC Coefficient of JPEG Block