I would like to start learning audio signal processing. There are numerous books online and academic papers all of which seem to skip the fundamentals of the topic.

I would like to know a rough roadmap, so to speak, to follow in order to successfully learn audio signal processing.

I have read that calculus is the first step before starting with signal analysis.

It feels to me like audio signal analysis is only one part of the overall knowledge needed. Where other topics are music theory, audio engineering and programming.

If I may ask people with knowledge on this area to suggest possible steps towards understanding how to analyse and manipulate/create audio signals.

I recommend having a look at Prof. Julius O. Smith III's Physical Audio Signal Processing. It's available online, or can be purchased through Amazon's print-on-demand service.

In particular, the description in the Book Series Overview might be worthwhile. 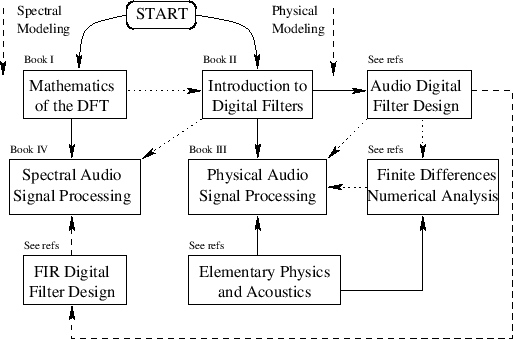 I don't think there is any point diving into the complexity of DFT / FFT / IIR / FIR and wavelets without first understanding what audio is fundamentally and what the various ways of representing audio digitally are.

What is audio in general (in air, not water or other materials):

How is audio represented electrically:

How is audio represented digitally:

What different ways are used to store digital audio:

How to become more familiar with audio in the digital realm:

This will hopefully give you a sense of what digitally represented audio is and what the differences sound like prior to attempting any DSP. It's always easier to know that something is wrong with your FFT analysis if you can recognise that you have inputed an 8 bit signal vs a 16 bit signal for example or that the sample rate has been corrupted by a faulty miscalculation in a transform.