Determine line rate and frame rate of a system

I have as a homework to determine the line rate and frame rate for a system described above:

I search for the definitions in order to understand the system:

Line rate: It indicates the actual speed with which the bits are sent onto the wire

Progressive video: is the method by which all lines (whole frame) are captured at the same instant, representing a single moment in time

The screen aspect ratio is width divided by height, and the same for the pixel aspect ratio.

Horizontal blanking interval refers to a part of the process of displaying images on a computer monitor or television screen via raster scanning. CRT screens display images by moving beams of electrons very quickly across the screen. Once the beam of the monitor has reached the edge of the screen, the beam is switched off, and the deflection circuit voltages (or currents) are returned to the values they had for the other edge of the screen; this would have the effect of retracing the screen in the opposite direction, so the beam is turned off during this time.

Vertical blanking interval is an interval of time between the last line of a given frame and the beginning of the next frame, during which the incoming data stream is not displayed on a CRT screen. It is the time interval allowed for the analog TV electron gun beam to move from the bottom of the current frame to the top of the next one as it scans images. This requires the last 45 lines of each 525-line frame. 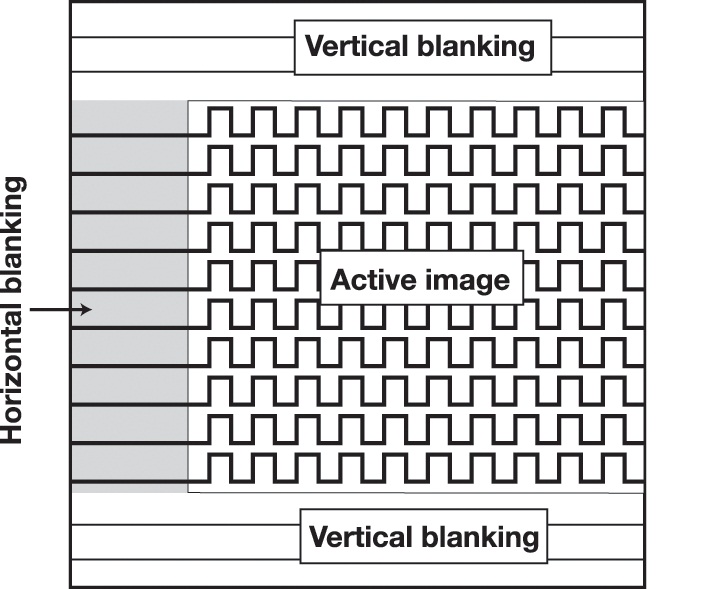 My problem is that i cant find a proper way to calculate the line rate or frame rate from the above. I didn't find any equation or a guide. Can someone help me or point me a tutorial? I assume that the line rate has something to do with the horizontal blanking and vertical blanking because the electrons that need to provide through the wire, but still i need an equation.

Browse other questions tagged image homework or ask your own question.

8
FFT for line detection
2
Gain of the system
2
Longest line inside of 3D object
0
Processing line scanner data
0
Does the cv2.waitKey argument determine the frame-rate while capturing a video?
4
Determine whether the system is linear?
3
How are line pairs and pixels related in image resolution?
0
Determine if system is linear time variant