This to me implies that it maximises it everywhere, but I don't see how that is possible. I've looked at the maths in my communications engineering textbooks, and from what I can tell, it's just at the decision point.

Another question I have is, why not make a filter that makes a really tall skinny spike at the point of decision. Wouldn't that make the SNR even better?

Edit: I guess what I'm also thinking is, say you have a some NRZ data and you use a matched filter, the matched filter could be implemented with an I&D (integrate and dump). The I&D will basically ramp up until it gets to the sampling time and the idea is that one samples at the peak of the I&D because at that point, the SNR is a maximum. What I don't get is, why not create a filter that double integrates it or something like that, that way, you'd have a squared increase (rather than a ramp) and the point at which you sample would be even higher up and from what I can tell, more likely to be interpreted correctly by the decision circuit (and give a lower Pe (probability of error))?

Since this question has multiple sub-questions in edits, comments on answers, etc., and these have not been addressed, here goes.

There are several points worth noting about this result.

But what about noise and SNR and stuff like that which is what the OP was asking about? 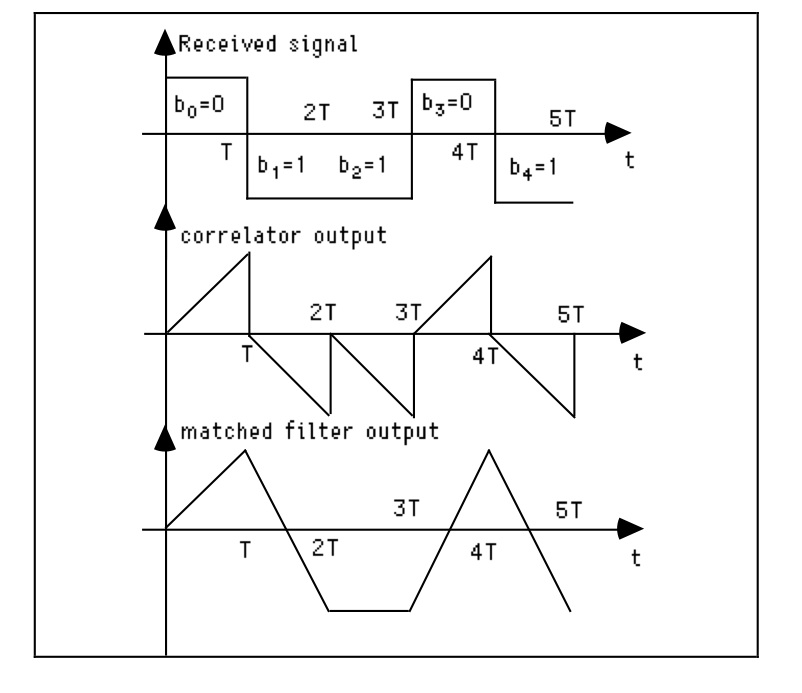 If you sample the correlator output at other times, you get noise with smaller variance but you can't simply add up the samples of I&D output taken at different times because the noise variables are highly correlated, and the net variance works out to be much larger. Nor should you expect to be able to take multiple samples from the matched filter output and combine them in any way to get a better SNR. It doesn't work. What you have in effect is a different filter, and you cannot do better than the (linear) matched filter in Gaussian noise; no nonlinear processing will give a smaller error probability than the matched fiter.

You are right: A matched filter will maximize SNR at the instant of decision.

Note that your proposal of a tall spike "filter" is not a filter, but actually a sampler (the sampler used at the decision point).

The matched filter is a filter (i.e. linear time-invariant system) applied to the continuous input signal. The "spike at the point of decision" is very time-dependant (it is not a filter but a sampler).

The matched filter is the maximum-likelihood receiver in the presence of additive white Gaussian noise. Thus, for equal prior symbol probabilities, it will yield optimum bit-error performance. This is equivalent on the AWGN channel to maximizing the signal-to-noise ratio, as you pointed out. You also correctly pointed out that this maximum-SNR condition is at the decision instant for each symbol.

The misconception in your proposal is that you can't do any better than the matched-filter approach on the AWGN channel. The output of the filter for time instants other than the decision point is irrelevant for bit-error performance. In a practical sense, it can be easier to obtain symbol-timing synchronization if the matched-filter output (i.e. the shape of the autocorrelation of the signal's pulse shape) has an impulse-like shape. In fact, some real communication techniques (like direct sequence spread spectrum modulation) have this property.

Furthermore, it can be very difficult to design a different filter that would have the specific time-domain response that you want. Such a process is known as deconvolution, and isn't easy. The double-filter approach that you suggest would actually have the opposite effect of smearing out the decision statistic even further (convolution inherently smears the signal out in time). You could perhaps devise some nonlinear filter that would give you a shape that you like more, but it isn't clear that it would retain the optimality of the matched filter approach.

I cannot answer your question in theory, however I can answer it practically - You may see it using a matched filter simulator (http://www.grauonline.de/alexwww/ardumower/filter/filter.html).

All the above answers nicely describe how matched filter is optimal but do not discuss why other samples are useless as far as decision is concerned. The interesting perspective on these non-optimal samples comes from taking a frequency domain view.

Remember that cross-correlation in time domain is conjugate multiplication in frequency domain. When sampled at the optimal instant, the phases of all frequency bins are aligned such that the energy is maximized in I branch of the result and there is no Q arm. When sampled at another instant, phase rotations are introduced due to this time shift difference which are different for each frequency bin. See the figure below.

It is explained in much more detail in the article on demodulation.

Sometimes it is more useful to have a filter with a small tiny spike in the middle like you said. One such filter is called the MACE filter. This is the original paper

I feel like the other answers don't state succinctly the step by step process of how the matched filter is used on a concrete example, and what it actually consists of, and why it is needed and how it fits into the big picture, without being wordy or mathematical. Also there is a confusion about how the reference signal is known.

Instead, the reference symbol template is known. There is a matched filter consisting of a time reversed template for each symbol (each of the M symbols in Hartley's law) that can be possibly transmitted, and the matched filter convolves it in the time domain with the input signal, starting at a particular time instant, which will be the beginning of the received symbol. 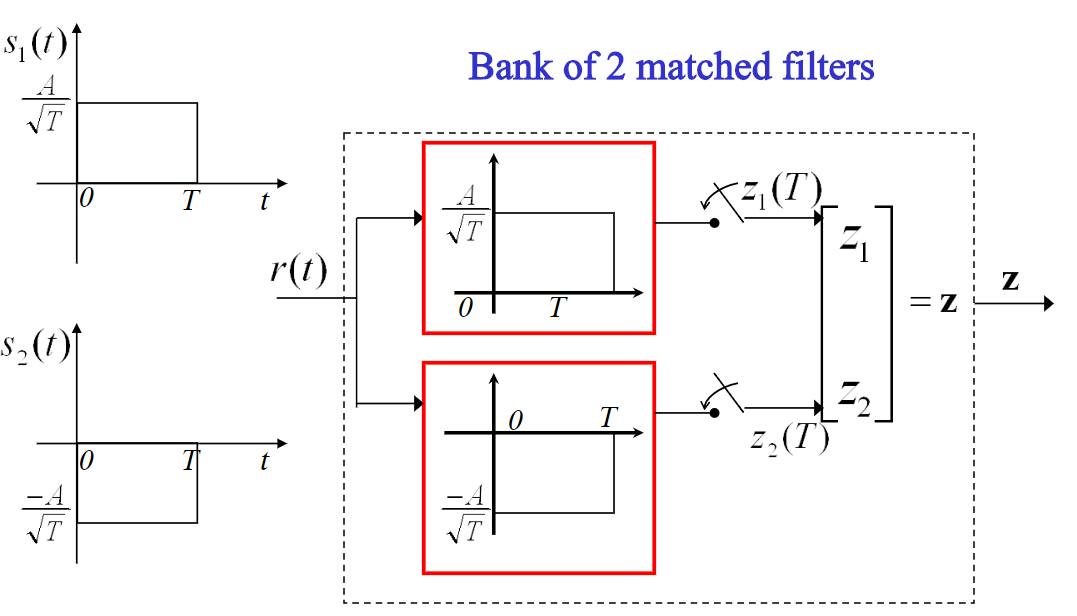 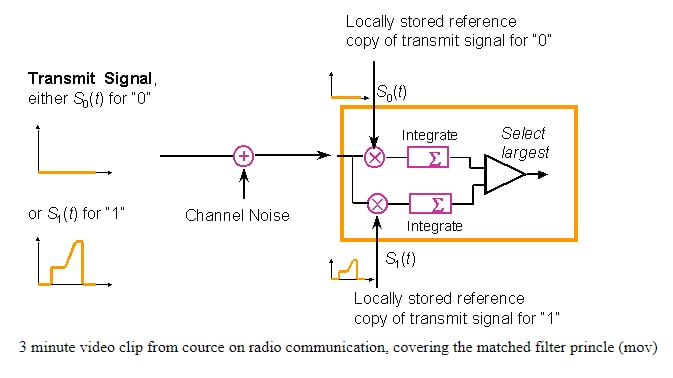 The time instant where $t$ = the start of the symbol is the place of highest correlation. The signals are aligned accordingly, and the $t$ term disappears as it's zero.

The sampling stage comes after the eye diagram in the above scenario.

Not the answer you're looking for? Browse other questions tagged filters digital-communications matched-filter or ask your own question.

0
Expectation and Auto-correlation of an Output from a Matched Filter.
2
An intuitive explanation as to why a matched filter is time reversed?
3
Integrator and the multiplier in the Optimal Binary Detector
1
Derivation of the Optimal Matched Filter - Convolution vs. Correlation
2
Signal Estimation after detection Part 2
1
Does a matched filter really improve SNR?
2
Use of equalizers in communication systems for Intersymbol Interference
3
About understanding a Matched Filter
0
Why Convolve instead of Cross-Correlate for Detection of Known Signal?
2
Matched Filter of Gaussian Signal
See more linked questions