Getting error in fit

I was wondering if anyone had run into the problem of trying to estimate errors in their signal processing on spectroscopic data. I know that many people use spectroscopic techniques to estimate concentrations of different materials, but I would like to know how accurate these measurements can be (i.e. I would like to get an output something like "species A is 20% +-1% of the sample given"). Further, I would like to know how to deal with very extreme cases, where several different types of materials are present, and may have observables which fall directly on top of each other.

A simple example may be the following:

You can see there are two species being fit to the data. If the areas are then transformed by calculation into percentages, (i.e. the sample taken is 48% B, 52% A) how can we be sure of this and how accurate is the fit? I know this will be dependent on the accuracy of the estimate of the positions of these peaks that are (perhaps) given by the user, so I am interested in a method that takes a known error in the parameters (say +-15 on the x axis for error in the peak center position, +-10 error in the width of the peak, etc.).

I suspect that the errors will become large when the observables overlap (i.e. the peak centers for two fitting functions are the same).

To illustrate my point further, here is an image of a spectroscopic measurement of several different materials: 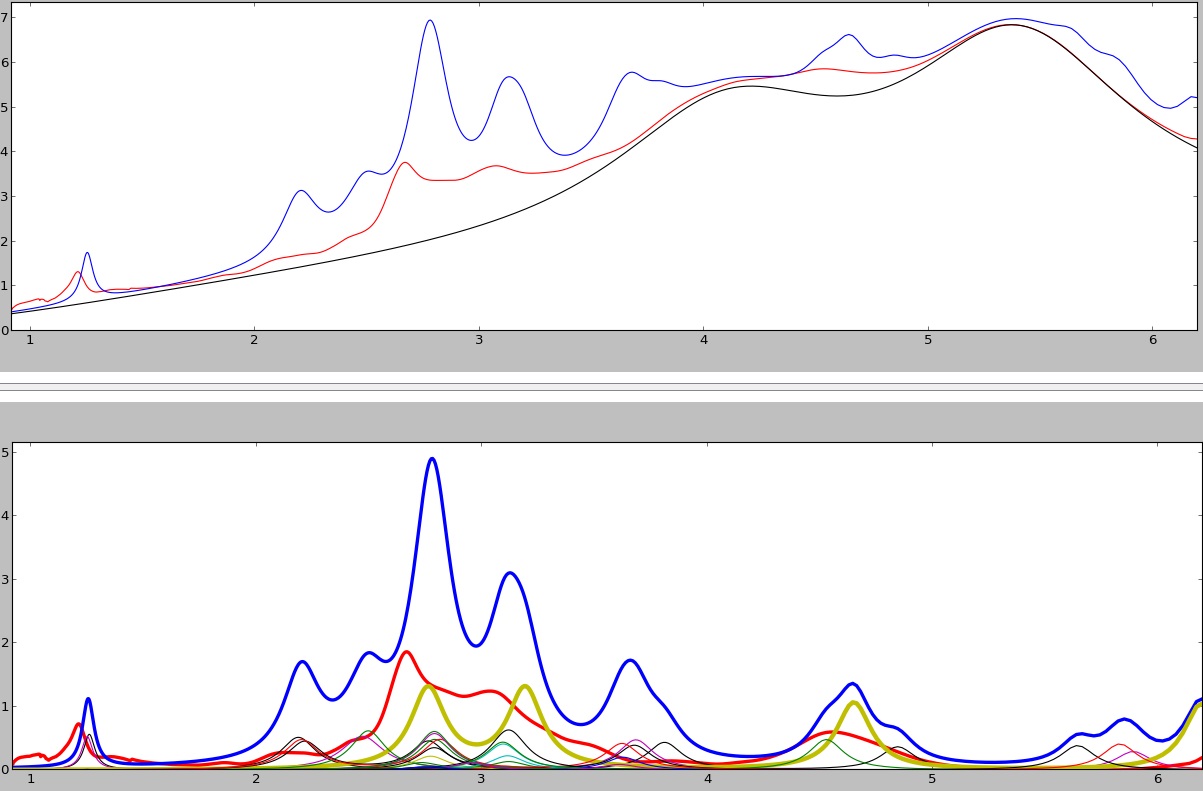 These are the calculated measurements I am interested in estimating the error in.

I have calculated the mean squared displacement as a quick estimate of how good the fit is, but I know that this doesn't do anything to address any larger concerns of the actual calculated measurement uncertainty. The most I have really done in statistics is standard deviation and calculations dealing with several measurements, but this is quite different, since it deals with how sure you can be with only one measurement, not seeing differences in multiple measurements. Is there a way of using confidence intervals and confidence levels on non independent and identically distributed random variables? (Again, I am very new to statistics and have never taken a course on it, so I apologize if this is elementary or trivial)

sampling cross-correlation statistics
Share
Improve this question
edited May 7 '13 at 19:50

Well, without knowing the specifics of your algorithm, I assume that you basically have multiple functions (e.g. Gaussian or Lorentzian peaks, each with position and FWHM parameters, additionally maybe some polynomials for backgrounds etc.) and you sum them all up into one big "fit function" that you hand over to an optimization algorithm that jiggles the parameters around until you found a good fit in the sense of non-linear least squares.

What you can do then is computing the asymptotic standard errors. For this, you have to (most likely numerically) compute the Jacobi Matrix of your fit function (matrix of partial derivatives for each parameter (columns) at each measurement point (rows)). From this you can compute the variance-covariance matrix and then compute the errors for each parameter. This is an approach very often found in curve fitting software. In fact, there is a quite comprehensive explanation here at OriginLabs (see the section on Parameter Standard Errors). Also a more detailed overview can be found here at arxiv.

Other methods are discussed in this paper. They certainly are appropriate and maybe even mandatory in some cases, but I find them a bit too complicated for most "real world" applications.

If I were you, I would go with the asymptotic standard errors for a first start and see, if they fit the needs. It is an easy to implement strategy that is, as already said, also widely found in software packages.

Not the answer you're looking for? Browse other questions tagged sampling cross-correlation statistics or ask your own question.

4
Compensating for measurement errors
9
Directly compare subpixel shifts between two spectra — and get believable errors
4
How to estimate the mean of a clipped signal?
1
Slow sampling of signal and averaging over n periods
3
DOA estimation 2 sources time delay estimation uniform array
1
How to test if error has zero mean?
1
Fourier Transform of sampled reflectance measurements