I want to implement an IIR filter. The filter is going to implement by cascading second order sections. Below there are 3 pictures that implement this filter using: 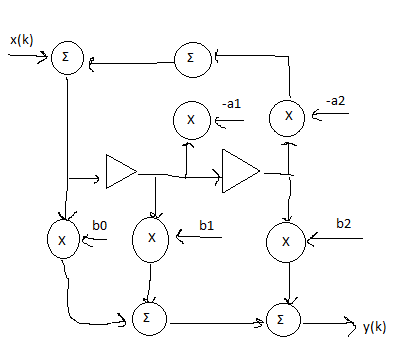 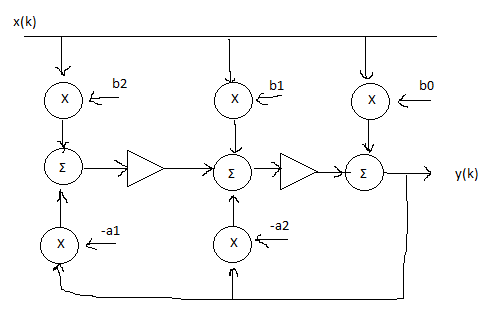 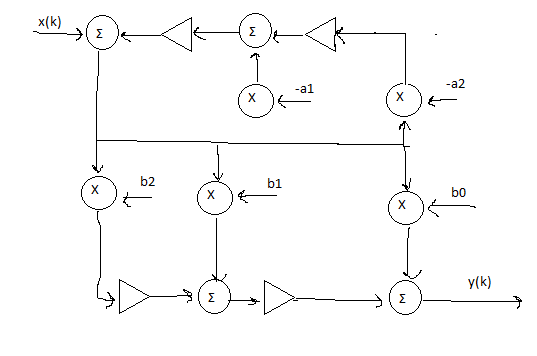 Peter's correct. at least if fixed-point arithmetic is used. the DF2 has poles before zeros. that means the signal is getting boosted by the poles before the zeros (which are often sitting very close to the poles) beat the gain back down to reasonable levels. so if the signal overflows, saturates, and distorts due to this gain, the attenuation offered by the zeros does not reverse that distortion error. it's too late.

now the DF1 implements the zeros before the poles, and if you did not have an accumulator that has a double word width, then the DF1 suffers a sorta opposite flaw. instead of potentially overflowing (and saturating) due to gain from the poles which is what the DF2 does, the DF1 will have attenuation first (due to the zeros) followed by the compensating gain from the poles. if the accumulator is no wider than the signal word going in, there is roundoff error due to quantizing the attenuated signal. then when the poles act on the attenuated and quantized signal, that quantization error is boosted by the poles.

BUT if your DSP (or whatever processor you use) has an accumulator that is twice the width of the two multiplicands, there is no roundoff error for the poles to boost. so the DF1 avoids the overflow problems of the DF2, but if and only if there is a double-wide accumulator, does not suffer from boosting the roundoff error.

Please see this write-up by Julius O. Smith III on the Direct Form II filter structure. One issue with "canonical with respect to delay" filter structures is that they can be subject to overflow.

I'll need to go through it completely, but I believe structures (1) and (2) in your question will be subject to this possible overflow.

Are you implementing this in fixed point arithmetic? Do you have a known input range?

I was a little confused by your diagrams: what I believe you are using for delay elements would normally be gain-only (amplifiers). Delay elements are usually drawn differently.

0
Tradeoff between Filter Order and Sections
0
Implementation of a cascaded IIR filter
1
Regarding BIQUAD IIR implementation in MATLAB
0
DFT in IIR filters
2
Can a Goertzel filter response be mapped to a Direct Form II Biquad IIR Filter
2
Matlab IIR cheby2 bandpass, problems with Magnitude
1
How to filter data with given numerator and denominator coefficients of an IIR Filter, in MATLAB Implementation
0
Draw a structure for IIR Filter given H(z)
1
IIR filter relationship between number of poles, order and second order sections
1
IIR design: SciPy CMSIS-DSP coefficient format