Ask Question
Asked 8 years ago
Active 8 years ago
Viewed 2k times
2
$\begingroup$
It's difficult to tell what is being asked here. This question is ambiguous, vague, incomplete, overly broad, or rhetorical and cannot be reasonably answered in its current form. For help clarifying this question so that it can be reopened, visit the help center.
Closed 8 years ago.

I showed the question about flipping the impulse response to some math teachers and electrical engineers at an university. They read Dilip's answer and thought that it was hard to understand what Dilip meant and it was simply not true...

Could someone confirm that it really isn't true what Dilip Sarwate wrote. And explain it in a way that is easier to read.

Flipping the impulse response is really just a matter of perspective. The LTI system doesn't care about perspective. In any case, here is a graphic showing a system that takes an input of color weighted impulses. 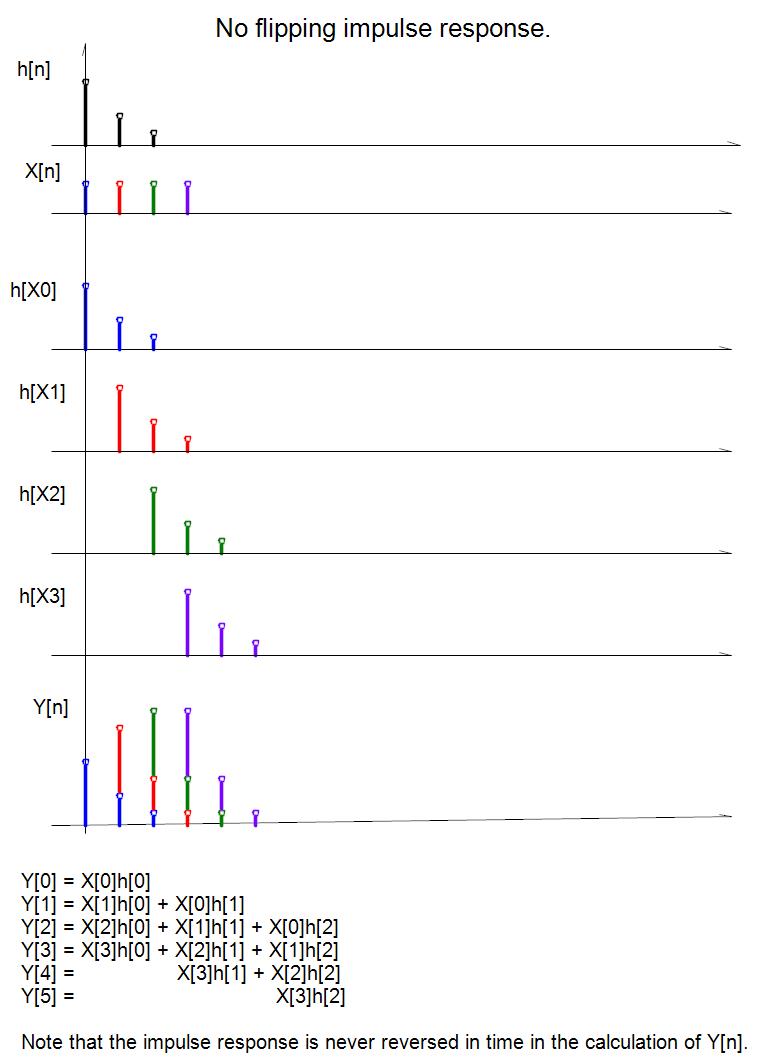 I'll try my hand at this also. In my experience, in courses where the concept of convolution is taught, it's common to see the "flip-and-slide" process diagrammed out as you've alluded to. I don't feel that the graphical illustration itself really gives that much insight, but here's how you might arrive at it starting with the convolution integral itself:

In the event that the impulse response $h(t)$ is causal (i.e. it is zero $\forall t < 0$, and it usually is), then the above integral can instead be written as:

Note that you can change the limits of the integral, because $\forall \tau > t$, the argument to $h(t)$ is less than zero, therefore making the integrand zero. Likewise, if the input signal $x(t)$ is causal, then the above integrand is zero $\forall \tau < 0$, simplifying it further to:

This is starting to look a bit less imposing. Now, the question is, how does this equation lead to the "flip and slide" interpretation of convolution? Well, by straightforwardly reading the above equation, you can recognize the following:

However, understand one thing: there is no actual time reversal of the impulse response that occurs when you excite an LTI system with an input signal. That's merely one way of intuitively interpreting the structure of the convolution equation, and one that lends itself well to a graphical explanation that most will probably have seen in an undergraduate signals and systems course. One such example is given on Wikipedia, duplicated below. It is interpreted as follows:

As I said, that's the description that you've probably gotten from your professors, and it works well if you're tasked with calculating convolution integrals for simple functions, which typically involves some variation of the above process over a few piecewise intervals. Like I said before, though, I don't feel like this interpretation gives you much intuition to go on.

In my opinion, the superior explanation is that espoused by Dilip in the linked answer. You can arrive at it via what I think is an even more straightforward reading of the convolution integral:

Read it as follows:

That's it! I feel that this gives a much better feel for the "action" that an LTI system performs to an input signal. Think of it this way (which is very mathematically imprecise): at each time instant, the input signal "causes a copy of the impulse response to start coming out of the system," with an amplitude commensurate with the value of the input at that instant. Due to the linearity and time invariance of the system, all of these impulse response copies sum up to form the composite that is the output signal $y(t)$. While I find this very intuitive, it is even more clear for the discrete-time case: $$ y[n] = \sum_{k=0}^{n} x[k] h[n-k] $$ This is the exact same concept, except the infinitesimally-spaced integrals turn into discrete sums (and the discrete nature makes it even easier to visualize, as Dilip tabulated it in his answer that you referenced). I think that using this idea is the best way to express the nature of the convolution integral.

An LTI state machine, left on its own, and running forward in time, executes down the path of un-flipped impulse responses already initiated (scaled) by actual previous input to the system.

The LTI system does no flipping. But if you want to see what it would have done on some input that isn't currently represented by its actual current state, you might use this computational "flipping" trick on either the impulse response or on the time domain input.

"For each tap of the impulse response at $\tau$, I'm looking in the past of the input $x(t-\tau)$". This is the "scaled and time-shifted impulse response" view. Dilip's post, BZ's post.

"I am retracing the history of the input $x(\tau)$ and read from the impulse response by how much each sample is weighted to affect the present - the quantity $h(t - \tau)$".

A way of writing things in a way that does not show a minus sign:

Let me beat this dead horse one last time: when you do a long multiplication (this is indeed a convolution of the sequence of digits, with some carrying over), you will process digits in a different order whether you write it as $A \times B$ or $B \times A$. The result is the same and no number gets "written backwards" in the process.

30
Flipping the impulse response in convolution
14
Why convolution is required, or what is the philosophy behind convolution?

30
Flipping the impulse response in convolution
12
How to Deduce a Linear System's Impulse Response from a Set of Input and Output Signals?
3
Can I construct a linear system so that it results in a moving average?
2
Delayed impulse does not delay spectral response
2
Solving for impulse response h[n] given input-output pairs
1
What is the point spread function and optical transfer function and what uses are they in image processing
5
How do impulse response guitar amp simulators work?
3
Proving linearity and time-invariance