Image processing: how do I erode on boundary and dilate inside boundary?

I have an image that I am trying to process: 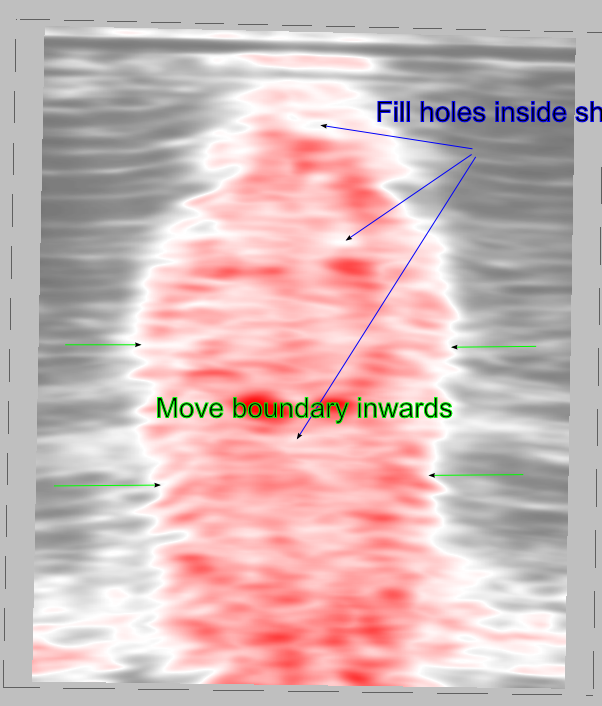 From what I gather the morphological operation dilatation would do 1. and erosion would do 2?

But dilatation and erosion counteract each other?

How would you suggest I go about to achieve the desired result?

You will want to use the morphological closing operation, which is the erosion of the dilation of an image. This means that you first dilate the image, removing the small 'holes' in the interior of the image, and then you erode the image, shrinking the boundary. If you want the final boundary to be 'smaller' than the original boundary, simply erode more than you dilate, ensuring that you dilate enough to completely fill the interior holes first.

The idea behind this is that by removing the holes via dilation, the information about those holes is lost from the image. When you then proceed to erode the image, there are no longer interior gaps to erode away from, so it only erodes away from the outer image. Therefore, despite being opposing operations, the erosion does not simply reverse the dilation, provided the feature sizes to be removed are 'smaller' than the size of the dilation.

Not the answer you're looking for? Browse other questions tagged image-processing morphological-operations or ask your own question.

2
How can I automatically find the boundary of a high intensity region inside an image?
6
Sequentially get the outer contour of an Edge Image
2
Refining lines in an image with openCV
2
Morphological Gradient Versus Linear Gradient in Image Processing
4
Looking for Open Source Image Processing Library that is equivalent to HIPS
3
Easy way to get rid of noise in a hand drawing
0
Image cleaning - How to remove line art from a colored image?
0
Detect lines transitioning to blobs in images
0
Object identification based on both shape and intensity -- i.e., identify the stars and their diffraction spikes at the pixel level