I'm interested in oversampling the inputs to a digital controller to increase the SNR of the input process variable signal. I've read on this site and in articles like the one below that it is not accurate to apply the z-transform to an up-sampling or down-sampling operation along with frequency domain techniques because the sample rate change operation is linear but not time invariant.

I'm curious to evaluate the reduction in proportional bandwidth of the loop gain of my servo system due to the anti-alias filter that would proceed the rate change operation. Although I have a time-domain, state-space model of my system as well, I thought it would be straight forward to approximate the bandwidth in the frequency domain.

Can anyone suggest an approximation that would allow me to insert either a decimating or interpolating CIC filter in a z-transform transfer function?

The primary impact of a CIC filter in a control loop is the delay it introduces, as a linear phase filter, in addition the change in amplitude within the loop bandwidth. The gain reduction actually helps our stability margin, but the phase impact can significantly reduce it. See the further details below on the equivalence of a CIC filter to a moving average filter: A moving average of $N$ samples will have a constant group delay of $(N-1)/2$ samples. When the moving average is done at a higher rate and then decimated by $D$, the delay in output samples is reduced by $D$ (every $z^{-1}$ becomes $z^{-1/D}$ at the output rate.).

Prior to decimation or after interpolation, the CIC transfer function is identical to a moving average filter (an FIR filter with all unity gain coefficients; ie the moving sum of the current and prior $N-1$ samples). Most CIC filters are a cascade of several sections (such as a $CIC^2$ is identical to the cascade of two such moving average filters).

This is demonstrated in the graphic below showing the equivalence of a 4 sample moving average (I say "moving average": if we scaled the output by four it would be the true average of the current sample together with the prior three samples) to a single section CIC filter. Below that is shown the implementation for $CIC^2$, and more generally $CIC^N$. 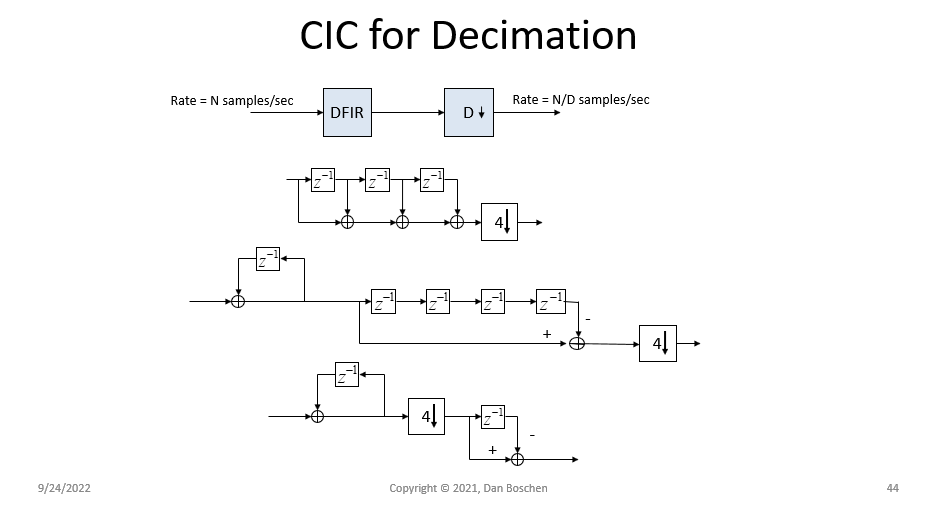 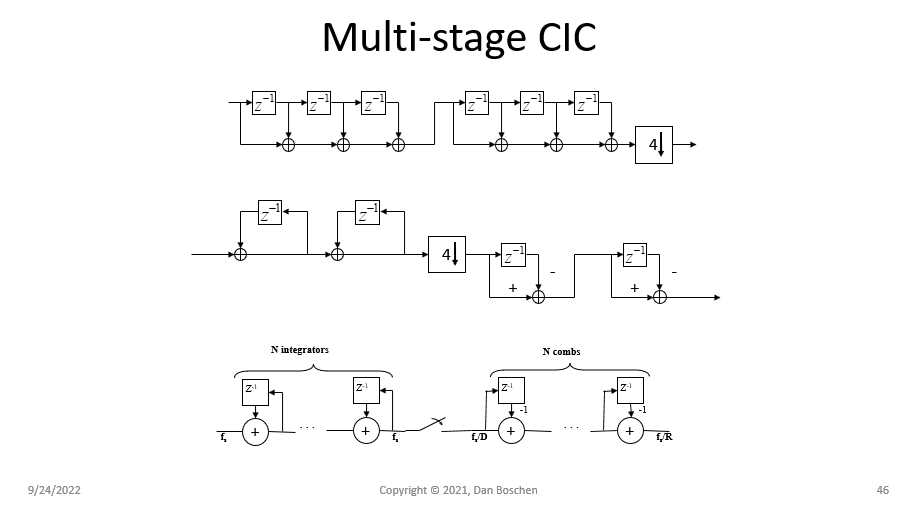 Resampling will result in frequency aliasing from all higher Nyquist zones, however understanding this can lead to reasonable approximations for practical use in the multi-rate transfer function that can be used.

Below is a simple example showing the frequency response with reference to the higher rate for a 4 sample moving average (which would be that for a single stage CIC for a decimate by 4 or interpolate by 4 operation). I show the input and output Nyquist boundaries ($f_s/2$) for a decimate by 4, and the resulting coherent frequency response with the shared blue box for any input signals at the input that are within the first Nyquist zone of the output rate. From this we also see that the delay (which is the negative derivative of phase with respect to frequency) is 1.5 samples as predicted by $(N-1)/2$ at the input rate, and that same phase slope is then $1.5/4$ samples at the output sample rate. 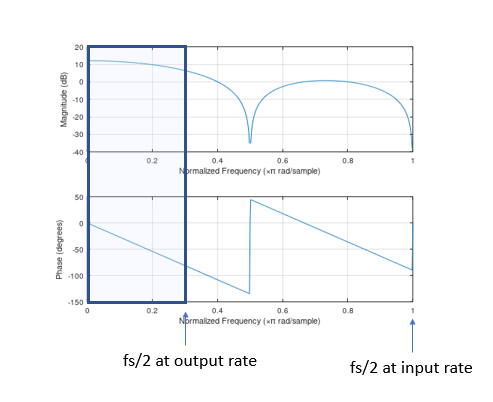 This plot was created in MATLAB using freqz([1 1 1 1]). Extending this to the more commonly used higher order CIC's is just a matter of convolving the coefficients. For example the coefficients for a CIC^2 would be coeff = conv([1 1 1 1],[1 1 1 1]) and the frequency response would then be determined using freqz(coeff).

If we are concerned about noise and SNR, we would then consider the effects of the aliasing in our analysis, where knowing the input noise, we can predict the output noise due to aliasing very accurately from the resampling. The input signal and noise would be processed by the frequency response shown, and then any energy above the output $f_s/2$ rate would fold into our first Nyquist zone as a non-coherent noise signal.

With regards to control system modeling for stability (such as Nyquist or Bode plots of open loop gain and phase), we are concerned with the coherent response specifically which is predicted (and not changed) by the transfer function prior to decimation. So specifically if a CIC decimation is inside the closed loop system (meaning it will be part of the open loop gain and its effects must be considered for stability); to assess these effects (and to properly design the loop filter with these additional delays considered), we can determine the transfer function using the equivalent moving average filter responses and include the resulting magnitude and phase over the portion of spectrum that is in the update rate of our loop as part of our evaluation of phase and gain margin for stability.

1
How do multirate systems introduce 'efficiency' in computation?
0
Multirate Signal processing for matching DAC of the SDR
0
What's the advantage/disadvantage of oversampling followed by decimation, verses sampling at the correct rate to begin with?
4
s-Domin or z-Domain - What to Use for Mixed systems
4
Stabilizing the inverse transform of a system
0
Oversampling, decimation and Nyquist
3
Effects of delay in a discrete-time controller for a continuous-time plant
2
Designing FIR filter for real-time decimation of audio on embedded system
3
How do we determine the required sampling rate of a closed loop control system?