I have a source that emits $M$ equiprobable messages, which are assigned signals $s_1, \dots,s_M,$ that are equidistant by $a$. That is, if we plot the $s_k$ signals in a horizontal axis they are dots separate by the same distance $a$. And so I would like to determine the optimum receiver and the corresponding error probability $P_{eM}$ for and AWGN channel as a function of $E_b/\cal N$.

As has been referenced in the comments already, you're describing a pulse-amplitude modulation (PAM) signal constellation. The problem, as you've framed it, seems to suggest the AWGN vector channel (where symbols are described using discrete values $s_1$, $s_2$, and so on), in contrast to the waveform channel, where symbols are expressed using waveforms that are transmitted over some period of continuous time.

While in the real world, the waveform channel is often used as a communication medium, analysis of performance of digital communication systems is typically related back to the vector channel for ease of analysis. This document has a discussion of the distinction between the two channels and how the conversion between the two is modeled mathematically.

With that said, you can frame the problem rather simply. Assume that at each symbol time, your receiver observes a value $x$, which is defined as follows:

where the value of $i$ indicates the symbol that was transmitted. $s_i$ refers to the value that would be expected at the receiver in the case of no noise (i.e. $s_i$ refers to the amplitude that is transmitted for symbol $i$). I will state without proof that the optimal decision rule (for minimum probability of bit error) for the case of equiprobable input symbols and white Gaussian noise is to pick the symbol value whose constellation position is closest to the observed point. This result follows from Bayesian decision theory.

The exact expression for the bit error rate will depend upon the coding of bits onto the symbols in your constellation. Borrowing a figure from an above comment: 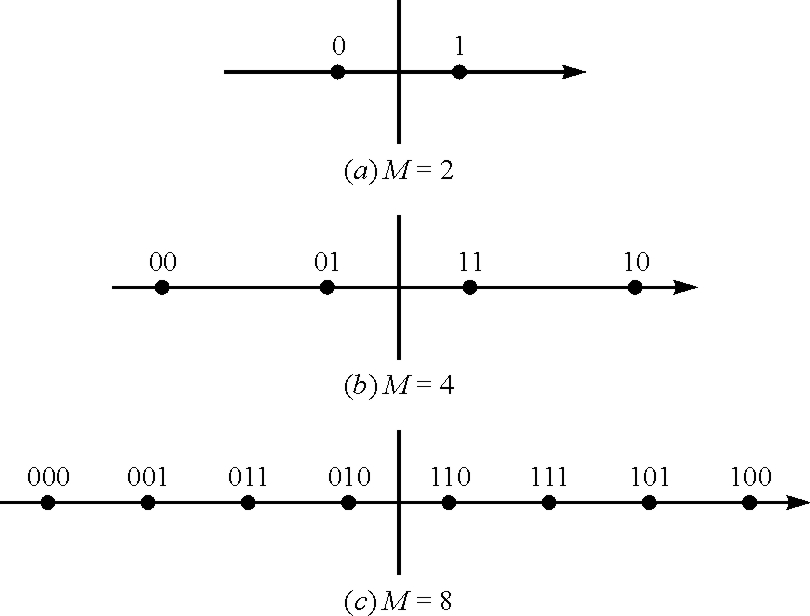 These are examples of Gray coded constellations, such that adjacent symbol positions only differ by one bit. These codings are used to minimize the probability of bit error for multi-bit-per-symbol modulations. You might ask: why do you need to know the symbol encoding in order to calculate the system's error performance?

Example: Assume the $M=8$ case illustrated above, with a transmitted symbol of $000$.

The noise observed at the receiver $n$ can take on any value $< 0$ without having any chance of causing a bit error! $n$ could be $-10000000a$ (which is likely not very probable), but $000$ would still be the closest constellation position and therefore the receiver would make the right decision. We clearly couldn't say this for another transmitted symbol like $110$, however, so the bit error probability must be dependent upon the symbol that was actually transmitted.

Assuming a particular coding of bits onto the constellation (e.g. the illustrated Gray code), you can construct the error probability conditioned on the actually-transmitted symbol. I will tackle the $M=4$ case from above because it is simpler than the 8-point constellation, but the same principle applies. While the spacing between points isn't shown on the graph (because I'm too lazy to draw one), the points from left to right should be located at $-1.5a$, $-0.5a$, $0.5a$, and $1.5a$, respectively. Remember that the optimum receiver chooses the constellation point that is closest to the observed value.

We can rearrange the above to be solely in terms of the noise term $n$:

On the AWGN channel, $n$ is a sample from a zero-mean white Gaussian random process. Assuming the noise process has variance $\sigma^2$, the above probabilities can be written in terms of the Gaussian distribution's tail probability function, known as the Q function:

Since all of the symbols are equally probable,

And that is how you would calculate the bit error performance for an arbitrary PAM constellation. Note that it is inherently a function of the signal-to-noise ratio, implied via the proxy values of $a$ (which is related to the received amplitudes, which is related to the received "energy per bit" $E_b$) and the noise variance $\sigma^2$ (which is also often dubbed $N_0$ in digital communications analysis). You could manipulate the above for given values of $M$, $a$, and $\sigma^2$ to arrive at a final result that is a function of the typical metric $\frac{E_b}{N_0}$. That is left as an exercise to the reader.

Not the answer you're looking for? Browse other questions tagged digital-communications signal-analysis gaussian optimization or ask your own question.