Downsample a signal by a non-integer factor

Since 8.9286 is not an integer multiple of 0.5 I can't simply decimate. Which downsample techniques are recommended to be used?

I could apply DFT to the original signal, then reconstruct in the time domain with the sample rate of 500 kHz, but that would take too much computational effort.

Is there a faster or simpler way to downsample it?

If python is OK, you can just resample using an appropriate (approximate) interpolator: 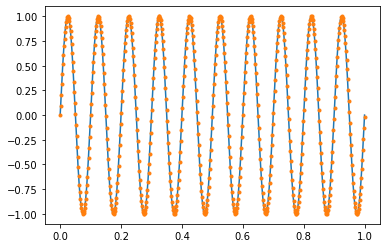 I'm not sure you're correctly interpreting the answer you cite: you don't just decimate by 647; you'd first (at least mathematically) upsample by some other factor. I'm not even quite where you got the 647 from, but an exact rational resampler would have to interpolate by 2500 and decimate by 44643. That's indeed a very unattractive resampler. 2500 and 44643 are coprime (or relatively prime), not prime in themselves; this is only important because if they weren't, you could cancel out factors.

Generally, you'd avoid resamplers where the interpolation or decimation sizes are so extreme, because you'll need to designa a $\frac1{44643}$-band filter, and that will lead to a very long filter.

However, it's worth noting that in you fixed-input/output-rate scenario, it might be worth considering whether you actually need your output rate to be exactly 500 kHz. For example, assuming you use this for wireless communications with packets with a preamble. Then, using an upsampling by 20 and a downsampling by 357 will give you a rate that's only 4·10⁻⁴ larger than 500 kHz. If your packet is, say, only 256 samples long after the preamble, when you properly aligned timing in the preamble, the timing of your last payload sample will be 10% too early. You could even incorporate that knowledge, and retard your timing synchronization at the preamble by 5% of a symbol period, so that the maximum absolute timing error over the whole packet is but 5%, if 10% timing error increases your error vector magnitude too much. 20 up, 357 down is still not an easy rational resampling, but on my slightly older CPU core it runs, at an output rate of 5.1 MHz/s around 20% faster than the exact arbitrary resample, and about twice as fast as the exact rational resampler (2500/44643).

28
How many taps does an FIR filter need?
3
How to filter and downsample before FFT?

4
Design of the low pass filter when decimating
2
What if the Down sampling factor is not an integer?
1
How does sampling and subsequent resampling affect aliased harmonics?
0
Reconstruction of bandpass filtered signal from decimated version of itself
3
Question about decimation/downsampling
1
Resampling time series to regular array, then downsampling (Butterworth)
4
Decimation filters: IIR vs. FIR