What is the frequency representation of nonuniform sampling?

Question: What is the frequency representation of a non-uniformly sampled $x(t)$? Or relatedly, what is the Fourier transform of a "non-uniform Dirac comb," assuming we know the time of each impulse?

The easy answer is that it is a sum of complex exponentials, but is there a way to simplify this, or see that it converges to a frequency domain Dirac comb as the time domain spacing approaches that of a uniform Dirac comb?

Many thanks for any insights!

@Fat32 suggests in the comments on his answer below that the copies are spaced evenly at $k\Omega_s/N$ (where $\Omega_s$ = Nyquist sampling rate), but have unusual weights. Can anyone confirm this, and give insight into the weights?

Other references I found but didn't spend much time on: 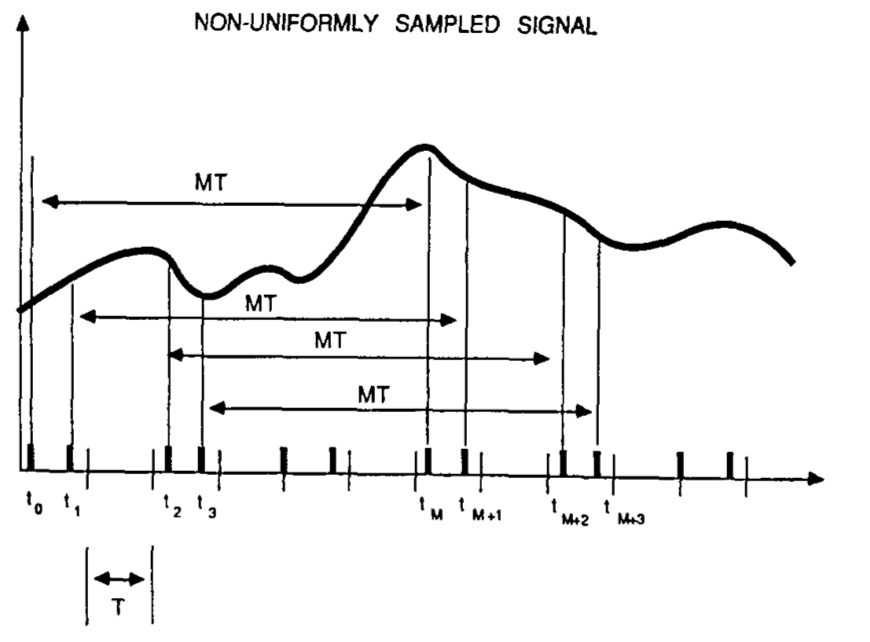 The signal $g(t)$ is sampled in such a structured way that the sampling time instances [...] have an overall period $MT$.

It then defines another band-limited sequence, $\bar{g}(t)$:

The sampled data sequence is then treated as if it were obtained by sampling another function $\bar{g}(t)$, [...] at uniform rate $1/T$.

and states the aim of the paper (which answers your question, at least for these types of non-uniformly sampled signals):

We are interested in finding the representation of the digital spectrum of $\bar{g}(t)$ in terms of the Fourier transform $G^a(\omega)$ of $g(t)$.

Using the framework described above, it then goes through a really nice derivation of $G(\omega)$ to arrive at two representations, from which you can see the effect of the non-uniform sampling on the spectrum:

For the simplest case of $N$ random samples of $x(t)$ taken over a duration of $T$ and satisfying the average Nyquist rate criterion, then the resulting Fourier transform of the non-uniform samples will be an $N$-fold aliased (as if $N$ times undersampled) and weighted sum of $X(\Omega)$.

If the samples are finite (e.g. not a running process) then you'd have to take the greatest common divider and resample all the vector, resulting in a "toothless" train of impulses.

If $x$ is a live signal then the only thing you can do is to use chunks of the signal and perform an FFT on them as above, but any subsequent difference will mean that the first FFT will not be the same as any of the following chunks.

Matlab has the nufft which uses:

For a vector $X$ of length $n$, sample points $t$, and frequencies $f$, the nonuniform discrete Fourier transform of $X$ is defined as

There's some analog non-uniform sampling theory and before microchips took over signal processing there were analog systems around to obtain the spectrum of non-uniformly sampled signals.

But the point is, it all ends up being processed with a CPU or GPU and unless you are doing Quantum processing research or developing a new analog processing computer, you have to work with one discrete sequence of numbers.

It's far more practical and common practice to 1st 'resample' the signal into a regular time interval dt and then apply for instance FFT.

1.- Import the signal and time reference into MATLAB

3.- Unless the signal has really dispare time intervals, like a cluster of many samples pretty close each other with really low dt, followed by eons of time to next cluster, then it may be the case that some interpolation sufices to turn it into a quite 'regular' time interval signal.

You can do different 'resamplings' and measure coherence among obtained spectrums.

4.- If you supply the signal or a significant chunk of it I may be able to further help with MATLAB, free of charge, I like solving problems with MATLAB.

4
Decimation filter that throws away every $N$th sample, keeping multiple samples: is it valid?
3
How to filter signals with non-uniform sampling rate?
0
While converting discrete filter specs into continuous filter specs, why do we multiply gain by T

6
Sampling Theorem and Dirac Comb
4
Spectrum of a Signal Going Through a Zero Order Hold Sampling System
3
Non Equispaced / Non Uniform DFT Bandwidth
3
What is the Fourier transform of $\delta(t-a)$
5
implication of sampling and reconstruction theorem
2
Use of the Dirac delta as a sampling operator
1
Distortion of a signal consisting of two periodic components
0
Fourier transform of dirac comb with function: The scaling factor
2
Does spectral leakage include negative frequencies?