How to choose correctly oversampling ratio?

I have "understood" from Mr Dan Boschen's explanation the following: for case, BT = 0.25 ovs=8 is sufficient for not introducing aliasing but also acceptable from a complexity point of view (not too large).

BUT how should I determine that this oversampling ratio is sufficient? Should it be calculated somehow? Should I implement an additional process?

I am sorry if it is the stupidest question you have ever read here...but I want understand this process.

The referenced post does not imply that 8 samples per symbol are required, that is only what was used in order to show the extended spectrum as copied below: 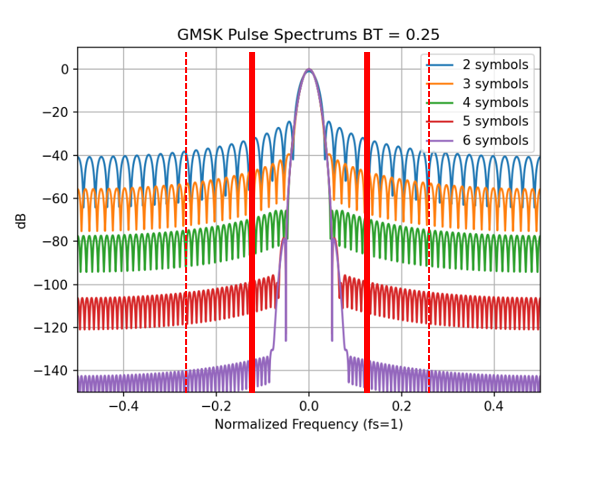 What I have also included in this copy of the plot are additional lines showing what would occur if we decreased the number of samples per symbol. At 8 samples per symbol, the normalized frequency shown extends from $f=-0.5$ to $f=+0.5$ corresponding to $\pm f_s/2$ where $f_s$ is the sampling rate, and $f_s/2$ is the "Nyquist boundary" beyond which spectral aliasing will occur. We see how the sidelobes of the spectrum continue to decrease as we approach the Nyquist boundary, so the determination of how many samples per symbol (which set the sampling rate) is set on how much aliasing we will tolerate, and as explained in other posts, allowing for simplification of subsequent filtering such as the analog reconstruction filter after the D/A converter.

As shown, the actual spectral levels in the plot in proximity to $f = -0.5$ and $f=0.5$ include the aliasing so would be raised slightly at these locations than if we had extended the number of samples even further. With a pulse duration of 4 symbols the overall distortion is nearly -80 dB, so in most cases this would be of no concern.

I have also drawn in additional bold lines showing where the Nyquist boundary would be if we were to decrease the sampling rate to just 2 samples per symbol (the new sampling rate would be at the dashed lines indicated by $f=\pm 0.25$ corresponding to decreasing 8 samples per symbol by 4. The Nyquist boundary would then occur at $f=\pm 0.125$ and the spectrum as shown just past this would fold back onto the main passband in the center, contributing additional distortion to our signal. With a symbol duration of 4 symbols, we would have spectral folding at approximately -70 dB (also likely of no consequence).

More significantly, the waveform will repeat spectrally at every multiple of the new sampling rate (in this case at $f=\pm 0.25$, $f=\pm 0.5$, $f=\pm 0.75$, etc..) thus imposing much tighter requirements on the D/A converter or subsequent digital interpolation filters if used. In this case, simplifying this filtering would be the prime consideration in choosing the number of samples per symbol, balanced with minimizing the digital sampling rate leading to lower power and lower complexity.

Note that in general as $BT$ gets higher the spectral occupancy of the waveform relative to the sampling rate increases. This means that at lower $BT$ values, the amount of oversampling needed decreases to meet a certain waveform quality requirement.