I'm trying to understand the $\\E_b/N_o$ concept and how different coding rates affect it. I've read a bunch of topics, specifically this and this, but I'm still missing something to have a clear picture.

I think I got the idea of $SNR$, as $SNR$ is a ratio of powers that actually exist in the channel, I mean real Watts.

However when it comes to $\\E_b/N_o$ I'm completely lost. Theory says that $\\E_b$ is the energy per information bit, i.e. the bit before an encoder.

The channel bit rate (=transceiver bandwidth) is fixed for all configurations, meaning that the information bit rate $(R_b)$ is affected. When it comes to simulation in Simulink of uncoded transceiver I set the following parameters: 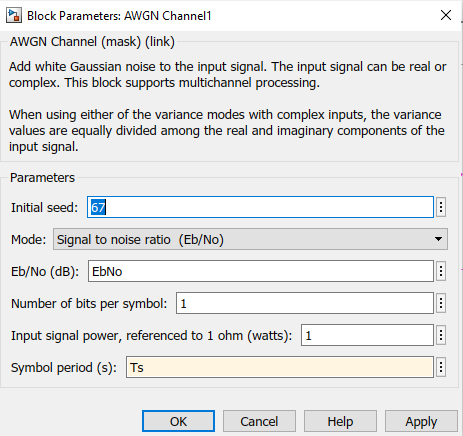 In the next iteration I added an encoder with the rate $1/2$.

There are a couple of different approaches to explain this. Let's try this one:

You have a receiver with received power $P_r$ watts, so that during a time interval $T$, it receives $TP_r$ joules of energy. Assume that bits (information and overhead) are received at rate $R_c$, so that during that same time interval, $TR_c$ bits are received. Then, each bit in the channel carries $E_c$ bits of energy, where $$E_c = \frac{TP_r}{TR_c} = \frac{P_r}{R_c}.$$

Now let's say that the channel rate and received power are constant, and you switch to a code with rate $1/3$. Then, $E_b = 1/3\,\mu\text{J}$: only one third of the energy is used for information, and two thirds are used for parity bits.

2
Relationship between "received" signal power and "transmitted" energy per bit?
3
How to achieve Shannon's capacity if coding introduces a spectral efficiency loss?
4
Energy per bit ($E_b$) in BPSK with non-unity channel gain
0
How to explain this BER vs SNR behaviour?
5
Conversion between Eb/N0 and SNR in spread-spectrum modulation like LoRa CSS?
4
What causes this type of distortion in a constellation I/Q plot?
1
Why do I keep seeing this equation for $E_b/N_0$
0
Calculating $E_b/N_0$ from given SNR ratio
2
Effect of altering FEC k/n versus symbol rate on BER performance