How do you design using bode plots? 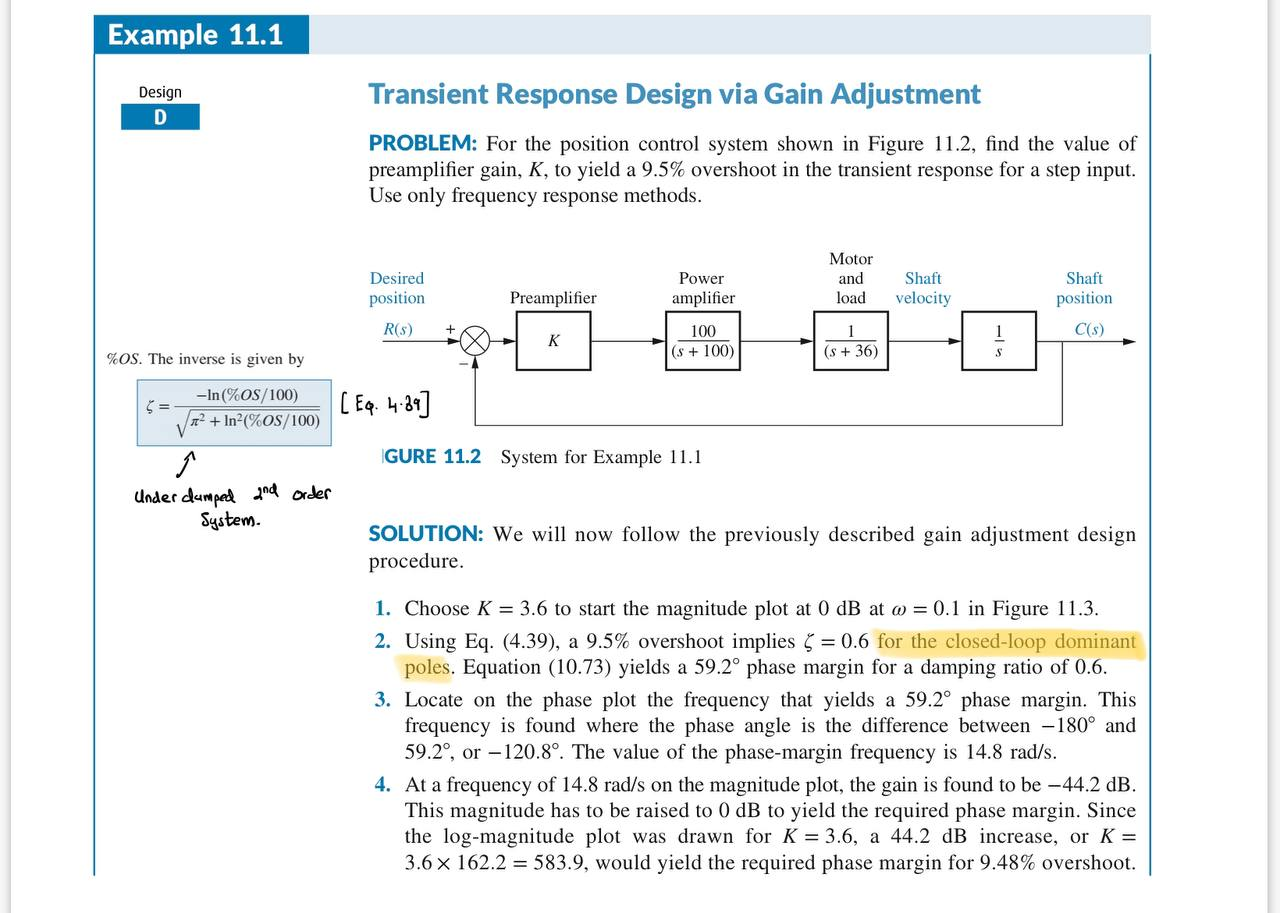 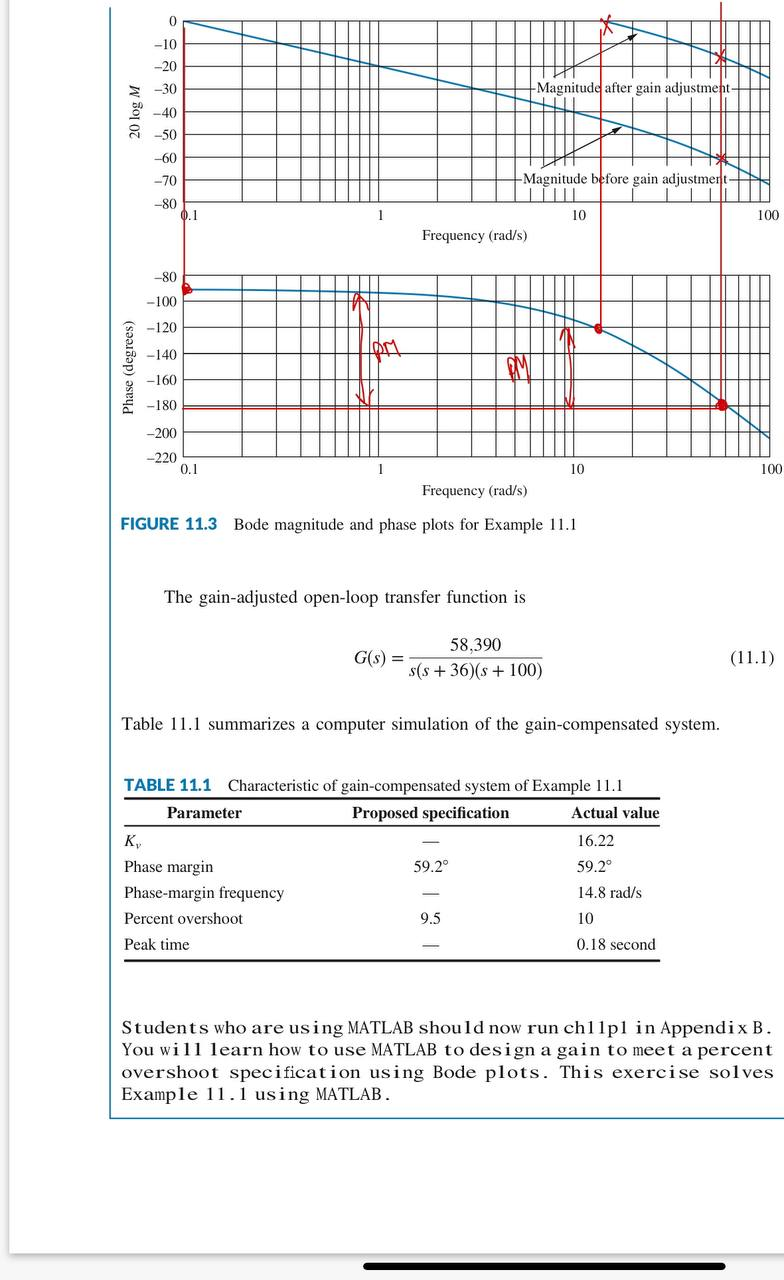 In the first image above, the author uses the specification of a 9.5% overshoot and combines it with the equation 4.39 to get a damping ratio value of 0.6. He mentions that this 0.6 value is for the closed-loop dominant poles. What exactly does he mean by this? My understanding was that the bode plot design technique is used on the open-loop 'loop gain' - so that should be showing open loop poles - not closed-loop? I.e, we have a brand new system, we want to put it in closed-loop feedback for automation, we put the system into a test setup with a unity gain feedback, we break the loop, we put a test signal in, we plot the loop gain and get the bode plot. If PM > 0 degrees, it means that if we were connect our loop back up again, it would be stable (not desirable, but stable). The bode plot was showing the open-loop poles, not the closed-loop poles. The actual closed-loop poles can be seen if we look at the bode plot of the output of the system vs the input frequency sweep, with the feedback intact and unbroken.

Can someone clear this up to me? How exactly does a bode plot of the open-loop loop gain relate to the closed loop poles and behaviour of the system?

The Bode Plot is typically used to display the open loop magnitude and phase response, for which we can assess stability in many cases (not all). The stability criteria that the phase is less than -180 degrees when the gain crossing is at 0 dB. 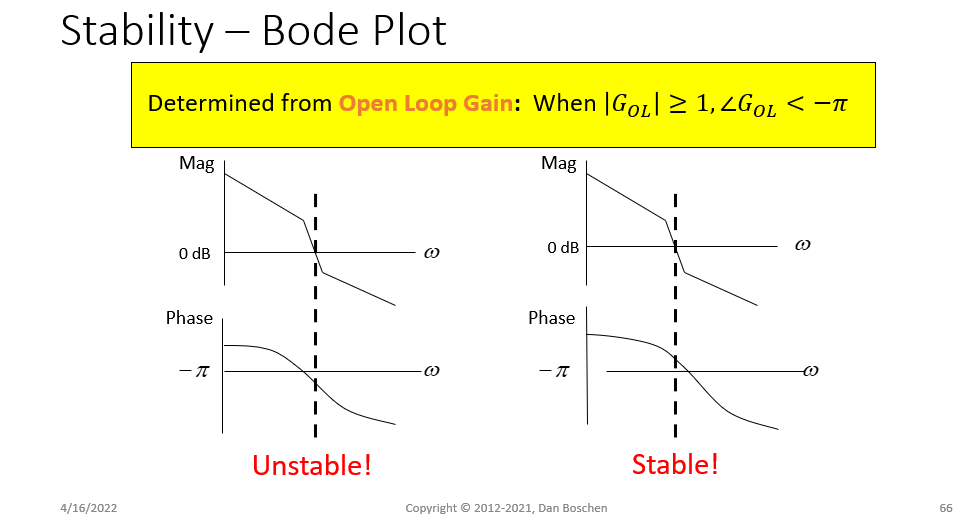 Where $G_{CL}(s)$ is the closed loop gain, $G_F(s)$ is the forward gain from the input to output of the closed loop system, and $G_{OL}(s)$ is the open loop gain which is the cascade of all the system components inside the loop, assuming a negative feedback which is not included as part of the open loop gain (hence the instability by having positive gain with feedback of 180 degrees which combined with the negative feedback causes the in phase positive gain that leads to instability). 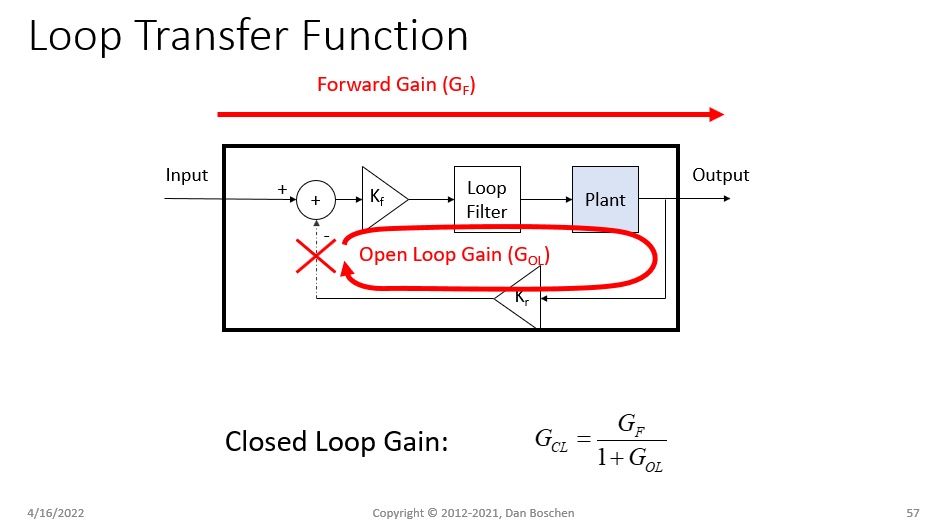 The denominator of the closed loop transfer function $1+G_{OL}(s)$ is called the characteristic equation and the roots of this (the closed loop poles) ultimately tell us if the system is stable or not. A big utility of the open loop gain alone and the use of the Bode Plot (and Nyquist plot) to assess stability is that it is something we can directly measure (in the case of stable open loop systems) and we can derive the Bode Plot even when an actual transfer function cannot be established such as the case of time delays in a continuous time system and other cases involving transcendental equations that can't be described with polynomials.

9
Do we use closed loop or open loop information in Bode plot, Nyquist plot and Root Locus?
1
Analyze stability of a closed-loop system with Bode
3
How can a system be unstable if $L(j\omega)$ is never exactly $-1$?
1
Under what conditions do the phase margin and Nyquist criteria give the same results?
0
How to make bode plot when output signal changes amplitude?
0
Calculating an in-loop signal as part of a hierarchical control loop
1
Root Locus, Transfer Functions and Unit Step Response?
0
Part 2: Root Locus, Transfer Functions and Unit Step Response?
4
Which step response matches the system transfer function