First, we consider a single carrier (SC) QAM-16 system modulated onto a 1khz carrier, which uses pulse shaping and has a bandwidth of ~10Hz as shown below 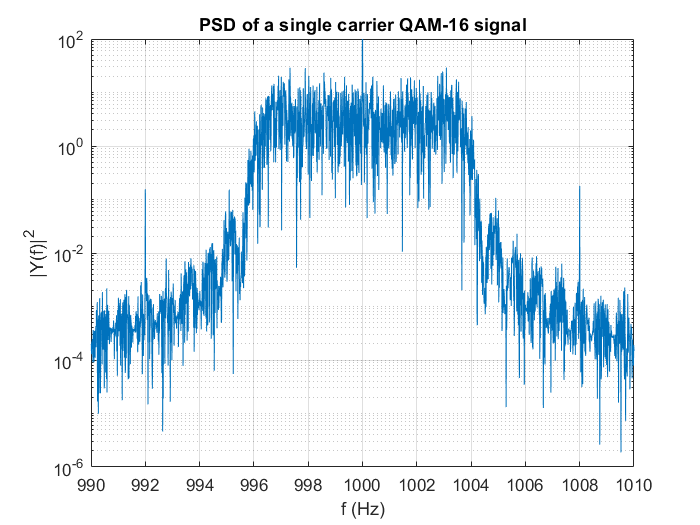 If we then transform this to a multi-carrier system my basic idea would be to have, say, 4 subcarriers transmitting in parallel, each with a symbol period (T_s) 4 times of the SC system. If in my code I do not use pulse shaping, and simply transmit the sampled QAM-16 symbol for 4T_s. Since the original BW is 10Hz, I chose a 10Hz spacing of subcarriers, This yields the following PSD: 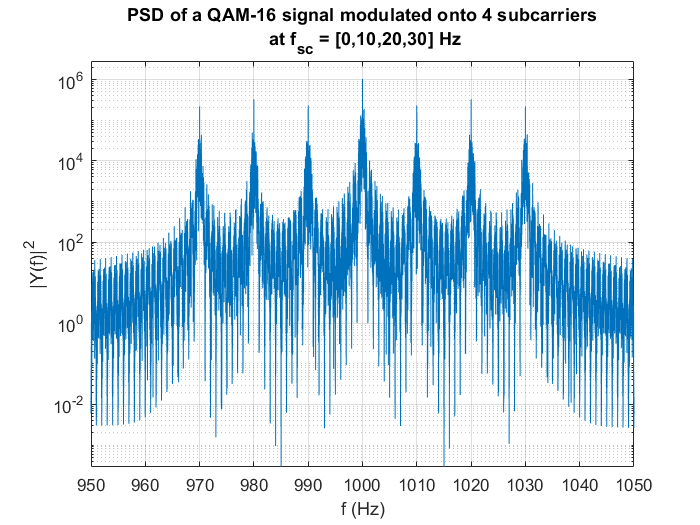 We then consider the same scenario, but instead of interpolating the sampled value by repeating it for 4 sample periods, we interpolate it for 4T_s by using a pulse shaping filter with upsampling. We can plot the PSD of such a system, with subcarrier spaced at 10Hz intervals as before. 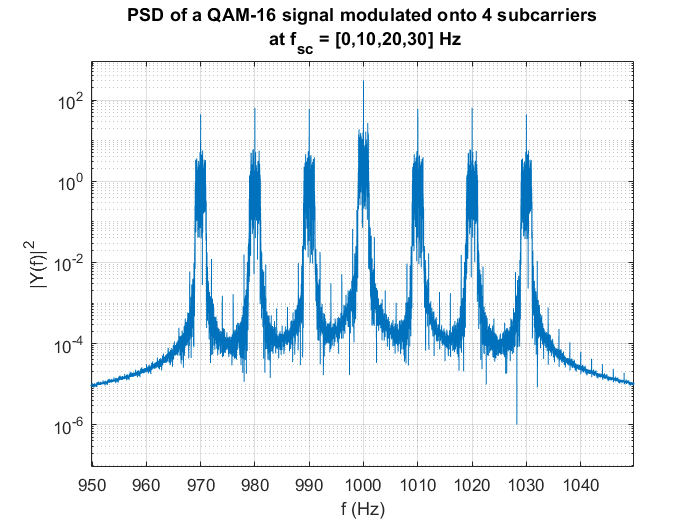 However, what we can see is that because the symbol period is now longer for each subcarrier, the signal switched less frequently, and so the bandwidth of the pulse shaped signal is less that 10Hz, so a 10Hz subcarrier spacing no longer makes sense. So I ask:

Should pulse shaping be used with non-orthogonal multicarrier modulation, and if so, what subcarrier spacing should be used?

Yes, if we are not using orthogonal frequency multiplexing and concerned about interference in adjacent channels (specifically if we want to constrain the total spectral occupancy for one channel) then pulse shaping is a good solution. In fact, this is the only reason I am aware of for doing any pulse shaping at all- minimizing the spectral occupation of the signal.

The criteria for both the shaping and proximity of adjacent channels would be the degree of interference between the two as measured at a receiver. This interference may be with our own waveforms coming from the same transmitter, in which case we needn't be concerned with "near/far" issues- or in a worst case, may be concerned with our interference to other users in which case consideration is made with how close our transmitter is to a victim receiver. Typically the limits are set in the standards and applied as a "spectral mask". If we were to establish the spectral mask, or just want to evaluation the cross channel interference, an EVM measurement in the receiver and confirming an excellent result with all other channels off and then measuring the EVM degradation (or equivalently SNR) with the other channels on would be a good approach. This should be with a receiver using a matched filter that provides adequate rejection of the out of channel signals such that it is only the in channel leakage that effects the result.

A reasonable separation would be given by the roll-off factor used in the pulse shaping filter (assuming RRC pulse shaping as commonly done). The occupied bandwidth is given as $R(1+\alpha)$ where $R$ is the symbol rate and $\alpha$ is the roll-off factor (typically a value between 0.1 and .3). Thus the carriers could safely be spaced by the bandwidth. Using the detailed methodology above and the EVM requirements of the waveform, it is possible to space them even closer.

As a side suspicion: For the case of multiple channels coming from the same receiver, it would be difficult (I never like to say impossible, but tempted to) to provide a solution of multiple pulse shaped carriers in a non MIMO solution that would provide a higher spectral efficiency than OFDM since this takes advantage of the synchronization in the transmitter to ensure orthogonality and thus provide the highest density of modulated waveforms occupying a given bandwidth: meaning you can't space the carriers as close as you can with OFDM if you aren't essentially doing OFDM, with no pulse shaping.

11
What is difference between OFDM and GFDM?
1
Transmit power of non-orthogonal FDM
0
OFDM Transmitter knowledge
6
The necessity of null subcarrier in OFDM?
1
Subcarrier spacing in OFDM
3
Sample rates, Samples per Symbol, and Digital Pulse Shaping
3
How to demonstrate the orthogonality of OFDM subcarriers?
0
Do the effects of OFDM pilot tones spacing appear in time or in frequency domain?
1
How to convert discrete-time QAM pulses to a continuous-time signal using the IFFT (for OFDM)?
1
Does the data rate of ofdm depends on number of subcarriers