Can an OFDM signal be demodulated at a sample offset over the cyclic prefix?

OFDM systems typically have a preamble or other synchronization symbols to aid the receiver with fine timing synchronization. There are algorithms, such as Schmidl & Cox (linked below), that create metrics which provide coarse timing over the OFDM guard period Tg but there is still ambiguity over the precise start time of the OFDM symbol. There are also other posts on this site that suggest you don't need to take the DFT at the receiver at exactly the right time (which doesn't make sense). How is the coarse timing offset resolved in OFDM if the DFT is taken at the incorrect sample offset (over the guard period)?

Yes it can, for time advances relative to the ideal selection but not for time delays. Since the Cyclic Prefix (CP) is taken from the end of the exact same OFDM symbol, it is circularly invariant, up to the shift equal to the length of the circular prefix, such that the resulting DFTs for any advance offset will all be related by a linear phase. (With an advance we circularly rotate through the same data, up to the CP length, with a delay we start using data from the next OFDM symbol).

A delay in time is a linear phase in frequency; each offset of one bin in time adds a linear phase in frequency over the resulting DFT bins after the FFT in the receiver that goes from 0 to $2\pi$ over the FFT duration, so this can be detected and corrected easily using the pilot sub-carriers. The issue is if the delay spread in the channel is at the maximum that the current CP supports; this will then degrade the circular convolution property that is used to equalize the channel. For channels where the actual delay spread is less than the time duration of the CP less the time duration of the offset, there will be no difference in performance.

If this isn't immediately obvious, it may help to first understand the circular nature of the DFT: Given N samples of a waveform in time will result in N samples of its Discrete Time Fourier Transform in frequency extending from DC to the (one sample less than the ) sampling rate:

If you were to repeat exactly the same waveform in time, the result in frequency would also repeat as depicted in the graphic below:

This is the same consideration that we get with the Cyclic prefix and time offsets in the actual selection we make in the receiver to do the subsequent DFT in the demodulation process. Consider the demoduation for Data2: If we were to have an advance as depicted in the graphic below in our actual selection of the time domain data for Data2, AND the delay spread of the channel was such that the delay spread from Data1 did not extend to the actual start of our selection for DFT Block2, then the resulting DFT will be identical after we compensate for the linear phase.

In this case, any delay spread affecting DFT block2 will be from its same data given CP2 is the identical content of the end of Data2 and we can use the circular convolution properties to equalize the channel. However we also see that if we were to instead delay the selection of DFT Block2 rather than the advance that is depicted, such that the selected data includes Data2 as well as a portion of CP3, we would have significant errors in the demodulation.

As for detecting sample offsets for the case that the start of the block occurs in advance, consider the Fourier Transform equivalence of a a delay in the time domain and a linear phase in the frequency domain:

As an example, if $m= -1$, corresponding to an advance in time of one sample, we would see a positive linear phase going from $0$ to nearly $2\pi$ across the DFT subcarriers as depicted in the graphic below. Knowing the expected pilot symbols, assuming this was the only variant, the phase error from expected for each pilot could be measured and from the measurements a least squares linear fit of the unwrapped phase could be used to then determine the actual time advance. 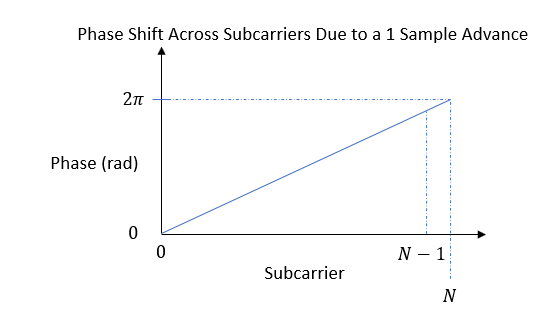 Not the answer you're looking for? Browse other questions tagged ofdm symbol-timing or ask your own question.

2
OFDM coarse freq estimation
2
Carrier frequency offset (CFO) estimation using cyclic prefix
3
Necessity of Cyclic Prefix in OFDM
7
Can we do cyclic prefix with zeros in OFDM rather than with samples from end of the ofdm symbol?
1
Effect of cyclic prefix and zero-padding in OFDM
1
OFDM sensitivity to sampling time offset (with half of time interval between samples)
3
Difference between Fine and Coarse Frequency Offset in OFDM
0
OFDM. Cyclic Prefix and ISI