Will or can a sampled signal with a limited sampling frequency have infinite bandwidth?

I know that a continuous-time digital signal with sharp edges (e.g. jumping from one y-Value to another discontinuously at the same x-value) will have infinite bandwidth. But what about sampled signals, that have a limited sampling frequency?

I read that aperiodic time limited signals will have an infinite bandwidth, but I can reconstruct any signal by doing:

What is the bandwidth of a random signal?

Will it have infinite bandwidth or is the bandwidth equal to the sampling rate?

I know that a digital signal with sharp edges (going from one y-Value to another at the same x-Value) will have infinite bandwidth.

A digital signal never has "sharp edges"; by the virtue of being digital, it's only defined at discrete points in time. So, it's just a sequence of numbers; these numbers don't have "edges" in between; the space in between two samples is simply undefined, has no value.

It does not have infinite bandwidth, by no understanding of the word I'd subscribe to. Being digital, the "whole world of bandwidths it could have" is the Nyquist rate. So, no.

Only when we take a signal composed of a comb of dirac deltas in the time-continuous domain we see a periodic spectrum – indeed, infinite bandwidth. But that's not the original digital signal, that's a very specific conversion of it. For time-continuous signals, we actually have infinitely extending spectrum.

Usually, and more usefully, we assume that, if there is a time-continuous signal equivalent to the digital signal (that's not generally the case! It helps trying to remind oneself of that, once in a while), that it was bandwidth-limited to begin with – otherwise, no digital signal could represent it, anyways.

So, I think your premise is a bit confused here.

In continuous-time, under the continuous Fourier transform,

You're still in discrete-time domain. So, the statement above has little to do with your statement here!

What is the bandwidth of a random signal?

In continous-time, it could be up to infinite.

In discrete-time, it could be up to Nyquist.

"up to", because "random" doesn't tell us much – you could have a random signal that is weak-sense stationary, correlated and has a limited spectrum in either case.

Maybe to extend the answer of Marcus. Here is a visualization: 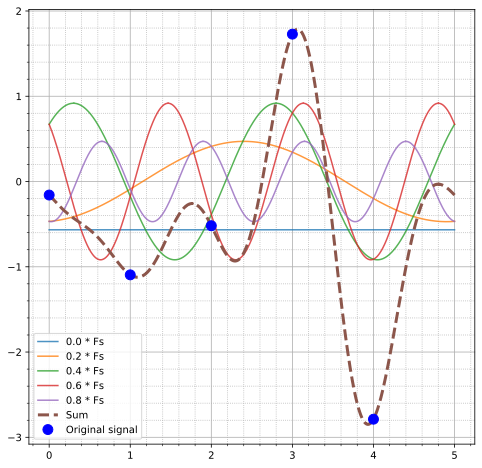 Your implicit model, when doing the FFT is always that your signal is band-limited as Marcus pointed out. So we know the that our signal is composed out of several complex sinusoids (See, e.g. here). Now since we know our complex sinusoid model, we can artificailly increase the sampling frequency of our implicit model, what is shown in the dashed line.

I read that aperiodic time limited signals will have an infinite bandwidth, but I can reconstruct any signal by performing an inverse FFT on the FFT of the signal.

The FFT does not operate on continuous-time signals, or even signals of infinite extent. It only operates on discrete-time, finite span signals. The "sensible" spectrum of a discrete-time signal with even sample intervals is periodic, repeating every $2 \pi$ radians per sample interval. Or, depending on who you're talking to or the problem you're working on, a discrete-time signal has a spectrum that's only defined over an interval that's exactly $2 \pi$ radians long, and talking about frequencies outside that interval is meaningless.

In the context that you're asking the question, yes. It's more accurate to say that if you start with some continuous-time signal $x(t)$ and sample it: $x_k = x(k T_s)$, then at that point the signal is aliased (basically munging the entire possible spectrum of $x(t)$ onto the $2 \pi$ radians that are possible for $x_k$). Then if $x(t)$ is of infinite extent you have to truncate $x_k$, and then you can take an FFT.

What is the bandwidth of some random signal?

Complicated. As you defined it, we're talking about a discrete-time signal $x_k$ of finite extent, where each $x_k$ is independent of any other sample $x_n,\ n \ne k$. In that case, the expected value of magnitude of the spectrum of the signal will be flat across the output of the FFT.

That's as infinite as you can get with a sampled-time signal, but I think it's fair to say that it fits your "bandwidth equal to the sample rate".

Not the answer you're looking for? Browse other questions tagged sampling nyquist bandwidth or ask your own question.

14
Is there such a thing as band-limited non-linear distortion?
9
Signal values we will 'miss' between sampling instances during sampling of band limited signals
5
How Does the RMS of White Noise Change with Sampling Frequency?
2
Applying Nyquist's sampling theorem to a real signal
0
Band-limited signal recovery with finite bit depth
1
anti-alias filter of square pulses
0
Whats the difference between spatial and temporal resolution?
0
does ifft of higher order equal upsampling signal
1
How do we equate the signal energy before and after sampling?