Identifying IIR systems is considered a difficult problem and different approaches have been proposed. Why is it considered difficult? I would like to find an accessible discussion of the problem (a link to an academic paper online would be ideal). Is there a good discussion somewhere?

This really depends on the specifics. Sometimes, it's easy, sometimes it's difficult.

Why is it considered difficult?

It tends to get difficult if the order of the filter is high, if there is a lot of detail at low frequencies and if the target phase is inherently non-causal.

The first two are related to the fact that most of the standard algorithms (such as Matlab's invfreqz() operate in the "transfer function domain" which at some point needs to be converted to poles and zeros. This involves finding the roots of a polynomial which is numerically difficult, especially if the order is high and the roots are close together.

As a simple example let's design a 8th order Butterworth highpass filter at 40 Hz sampled at 48 kHz (which is a typical filter you can find in a HIFI speaker). 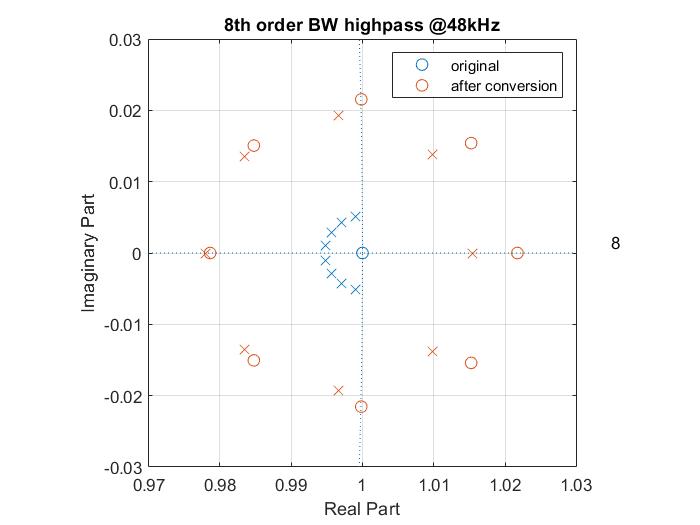 A more mathematical view would be that the algorithms are based on solving a least squared error problem and that in some cases the error surface is extremely steep and badly shaped. For filters that are often used in audio, it's not unusual to see gradients that are 10 or more orders of magnitude larger than the actual coefficients). The resulting matrices are often poorly conditioned and iterative search algorithms have trouble converging.

The "causality" argument is more complicated, so I'm going to skip it here. In conclusion, there are effective methods of IIR system identification but they are cases where the "simple" algorithms fail miserably and the there is no "one size fits" all work-around. Most more advanced algorithms are tailored & optimized to the specific class of systems and problems that you are trying to solve.

Not the answer you're looking for? Browse other questions tagged infinite-impulse-response system-identification or ask your own question.

1
Convolution by IIR filter, a case where circular convolution is allowed?
14
Filter Order Rule of Thumb
1
Calculating a NRR of an IIR
0
How to find the impulse response of this system with complex roots?
4
Why is it easier to design an IIR filter in the continuous time domain than in the discrete time domain?
5
Unstable plant transfer function identification
0
IIR initial condition / state meaning
4
Practical IIR filter implementation
1
Calculating and controlling the location and bandwidth of individual notches in an allpass phaser