I have recently been using the Hilbert transform a fair bit and its ability to return a instantaneous phase and magnitude estimate but it has got me thinking about the meaning of phase.

From my understanding the Hilbert transform (HT) and the analytic signal are fundamentally defined off trigonometric functions and so taking the HT of a sin wave results in a linearly changing phase response. If you take the HT of a superposition of sins (say just two) then you would see the frequencies averaged in the phase output and their difference in the magnitude output. I have worked through examples like this and that is all clear to me.

Now say then we take the HT of a saw tooth wave. This is a periodic signal and so clearly has a Fourier decomposition which would have lots of sin and cos terms, in fact it is just this:

You can of course take the HT and interpret the result as again combining these (now infinitely many) frequency components with their respective amplitudes. I have plotted that below 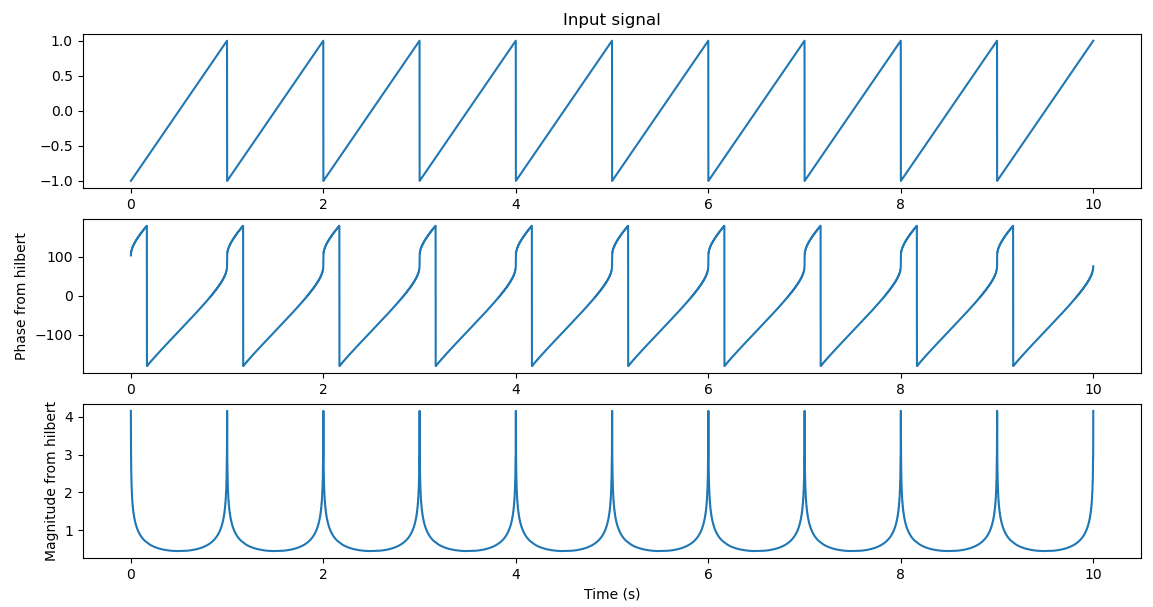 But in a way this is kind of useless right? Like to me the fundamental meaning of phase is just how far through the oscillation you are so I could look at the input signal tell you that the time period is 1 second and arbitrarily define the falling zero as having a phase of 0. The 'phase' is then just time_since_falling_zero/time_period and in that sense varies linearly (also a sawtooth). The magnitude would just be thought of a constant =1.

So in that way we have defined a new 'basis set' which instead of being sin and cos is itself a sawtooth wave which kind of gives more meaningful information in my opinion. My question is basically weather it is possible (and if so weather you can point me in a direction to this resources) to define pseudo-analytic signals and pseudo-phase planes where you could use another periodic signal as the basis, so you could have superposition of saw tooth waves...

I hope that makes sense. My head feels a little cloudy thinking about this stuff and trying to define phase planes not based on sin and cos.

Not really. The Hilbert Transform is essentially defined as convolution with $\frac{1}{\pi t}$

All trigonometric observation that you describe are consequences of these properties, but it's not the definition.

That's not a particular useful definition of phase. The Fourier Transform represent a time domain signal as a superpositions of complex exponentials (and vice versa). These are defined as $Ae^{j(\omega t + \varphi)}$ where $A$ is the amplitude and $\varphi$ is the phase. That's kind of all there is to it.

My question is basically weather it is possible ... you could use another periodic signal as the basis

5
Phase synchronization in BPSK
2
Why does Hilbert filter distorts the shape of the signal?
0
Phase error correction for Fourier transform basis vectors
3
Discrepancies between FFT-based Hilbert Transform and FIR filter results
1
Terminology for instantaneous phase of magnitude component of complex signal
1
How to explain the meaning of the intersection in a Fourier series representation of periodic signals?
9
Can humans hear Hilbert transform in audio?
2
Order of operations when a real audio signal becomes complex