How does analog television chroma signal work with QAM and vestigial sideband?

In NTSC analog television (presumably PAL is similar) the chroma (color) signal is included through a subcarrier which is QAM modulated. This particular QAM modulation is a bit unusual in that besides being analog there are two peculiarities: the Q signal has a smaller bandwidth than the I signal, and the I signal has its upper sideband partially filtered out, making it VSB. This second part has me confused. Wouldn't removing part of the upper sideband of the I component necessarily have an effect on the Q component? 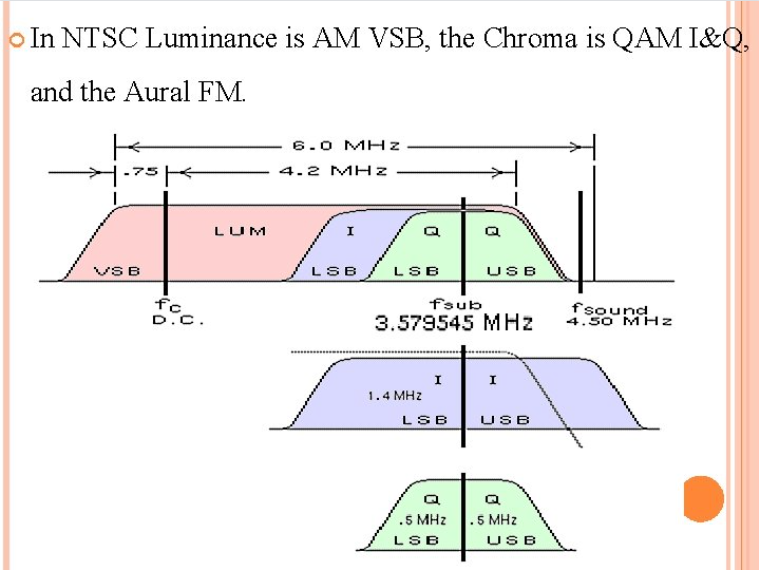 I am not an expert on the demodulation of NTSC, but noting here that the OP has made an interesting observation in that "I" as a real AM modulated waveform would have a baseband equivalent signal that would have a complex conjugate symmetric spectrum. If we were to filter the positive spectrum but not the negative spectrum, the result would no longer be complex conjugate symmetric which would mean whatever was originally all on "I" as a real AM waveform, must now have imaginary "Q" components as well.

What we see however is that we can decompose the in-phase Chroma signal (I) into the combination of a real conjugate symmetric spectrum over the full bandwidth of the quadrature Chroma signal (Q) combined with a negative only spectrum for the region beyond Q. Note that this part of the I spectrum that is outside the occupied bandwidth of the original Q, existing only on one sideband, will rotate on the IQ axis with all frequency components beyond the bandwidth of Q, and such that when we take the real part (in demodulating I) we will recover that as well!

I show this graphically below, first with the case of Double-Side-Band Suppressed Carrier AM (DSB-SC AM) modulation with just two tones representing the lower and higher portions of the frequencies for the in-phase Chroma signal prior to any subsequent filtering, with the modulation signal described as:

On the left is the time domain as rotating phasors on the complex IQ plane, and on the right is the Fourier Transform. We see the phasor representation directly by expanding equation \ref{1} using Euler's formula and knowing that the general expression $e^{j\phi}$ is a phasor with magnitude $1$ and angle $\phi$: 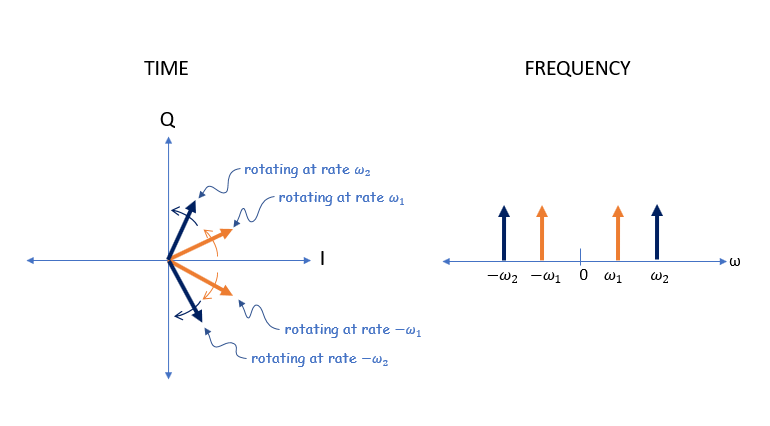 After filtering out the upper part of the side band we get VSB modulation: 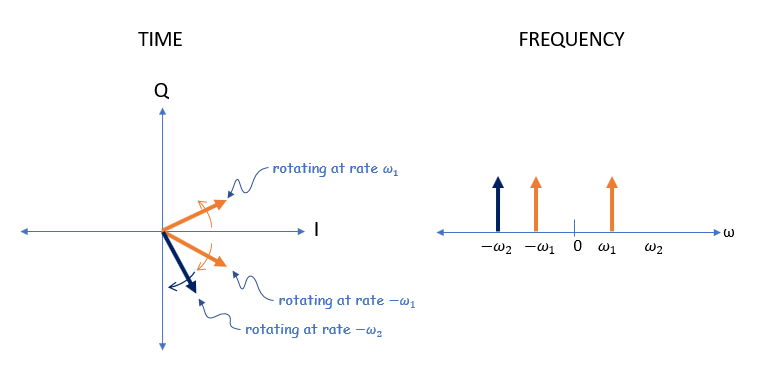 If the demodulator recovered the "I" signal by taking the real part of the resulting modulation, the result would be:

The point of the graphics is to demonstrate that the signal at frequency $\omega_2$ is both recoverable on its own and represents modulation energy that is outside of the occupied bandwidth of the "Q" Chroma signal.

Not the answer you're looking for? Browse other questions tagged modulation quadrature or ask your own question.

2
How to Shift Carrier Frequency in QAM Signal?
4
How is the symbol error rate for M-QAM, 4QAM,16QAM and 32QAM derived?
0
8-PSK baseband signal with real and imaginary part
3
How can the I and Q components of a quatrature signal be different from each other (apart from the 90º phase shift)
0
Some problem with the expression of QAM basis and signal
1
How does modulation work in simple language?
0
How exactly does 8PSK work on each I and Q leg?
3
Why is a bandpass filtered analog PM signal still PM and not AM
0
Limiting Bandwidth for QAM and OFDM signal in MATLAB Simulink