I'm so happy that i managed to come at this level to understand Wavelet transform to some extent with the help of Stackexchange fellows, Initially i had so many difficulties as i had no concept of Frequency Domain, then I realized that in order to Understand DCT it is mandatory to have basic idea of Co-relation. After studying different books I managed to understand how Wavelets works and how it plot its plot.

Here is when I am analyzing the noissin signal in Matlab Wavelet Toolbox. 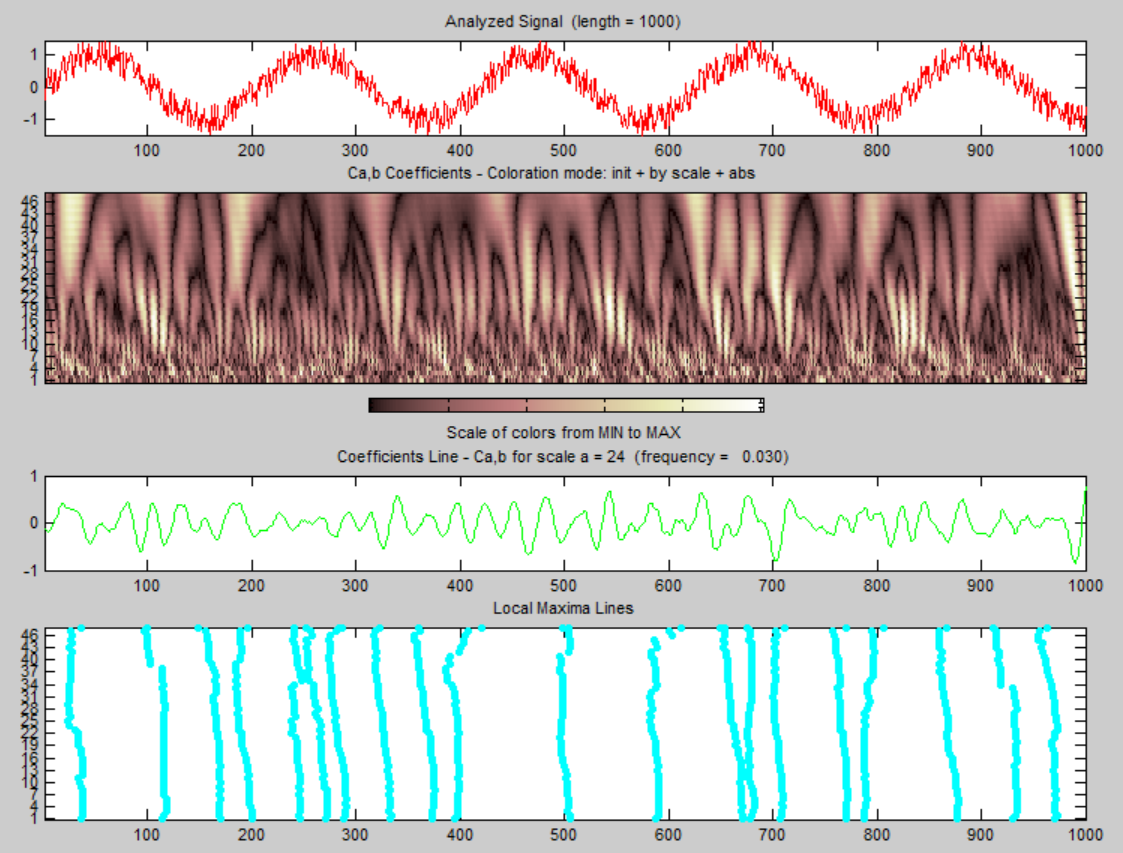 The db4 wavelet is used here with scaling of 1-48 and step size equals to 1. The first Plot is the original signal and the second plot is its Wavelet tranform which seems easy enough to understand now.

Also, the book says that Wavelet transform plots time vs scale plot and the inverse of scaling is the frequency.

Good questions. This is the way I understand the two diagrams:

The Wavelet transform can be thought of as a bank of filters with progressively wider bandwidths (working from the bottom to the top of figure 1). If you look at the output of the transform for a specific scale (e.g. scale 24) such as figure 3, you can think of this graph as a plot of your original signal after it has been passed through a bandpass filter where the characteristics of the filter are defined by the wavelet and the particular scale (24). This plot is the magnitude of the signal in the particular passband at sequential increments of time. If you reconstructed your signal from these coefficients you would end up with the signal resulting from the bandpass filter at that scale.

The continuous wavelet transform is particularly good at making irregularities in a signal "visible." In this context, an irregularity is a discontinuity or a sharp change or "cusp" in your signal. When sharp changes occur in a signal, the CWT will produce large coefficient values across many or all scales around the time of the irregularity. The function that produced diagram 4 attempts to locate such irregularities by examining the peak values of the CWT.

As you can see from your data, this is not an exact science. You're data doesn't really contain any "irregularities", but the algorithm picked up on some random changes and produced an output.

This type of processing is mostly useful in cases where the signal of interest is fairly regular but includes occasional sharp deviations. Imagine what would happen if you had a voice signal and you lost 30 contiguous samples (VoIP packet loss) and then spliced the signal back together. The resulting signal would be relatively smooth, but where the packet loss happened, the signal would have a sudden change in value. The "local maxima" plot can reveal the location of this kind of disturbance in your data.