How to predict the spectrum of an aliased/folded signal without looking at the FFT?

This seems like a trivial concept but I just can't get the hold of it. I have a signal with two complex sinusoids having frequencies -25MHz and 17MHz. Currently it is being sampled at 64MHz so I get two peaks of fft at -25MHz and 17 MHz. If I throw every other sample away the component at 17MHz shifts to -30MHz and the one at -25MHz to 14 MHz.

Your description of the situation is faulty. A complex signal sampled at 64 MHz can represent frequencies from -32 MHz to +32 MHz, so the presence of tones at -25 MHz and +17MHz is fine. However, when you decimate by two the sample rate drops to 32 MHz, and the frequency range becomes -16 MHz to +16 MHz. In other words, you can't have a signal at -30 MHz afterwards. 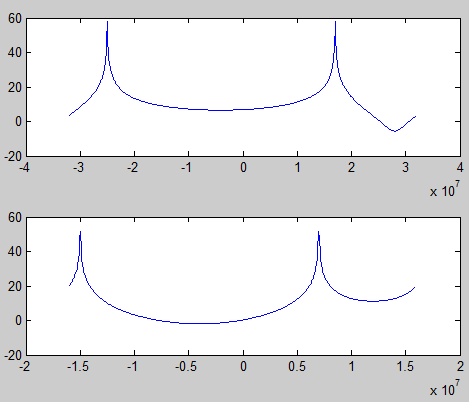 The picture above shows the before (top plot) and after (bottom plot) frequency spectrum. It was created with the following Matlab commands:

Based on your post, you are down sampling you're signals by a factor of 2, so your new aliased frequencies should also be devided by this factor.

If the signals to be sampled are less than the new sampling rate, you can calculate the aliased frequencies as:

So if we consider the original frequencies (fx) as positive (17MHz and 25MHz)...

If you have a frequency greater than the new sample rate (fs2 = 32MHz) you have to modifiy the value of fs2. The new value is the integer multiple of fs2 that is closest to the frequency of the signal to be sampled. I'll call the modified value Nfs2.

Not the answer you're looking for? Browse other questions tagged fft discrete-signals frequency-spectrum sampling aliasing or ask your own question.

1
Ways to analyze electrical signals without FFT?
2
DFT and then IDFT does not provide the same signal
0
efficient spectrum/fft analysis of sparse signals (found in radar applications)
1
How does sampling and subsequent resampling affect aliased harmonics?
0
FFT: Extracted spectrum depends on number of points sampled
2
Why do Dyadic filterbanks downsample the high pass signal portions?
1
How to deal with the mirrored components of a FFT? And another question
1
Can the (point-wise) multiplication of two discrete band-limited functions be inherently aliased?
0
What is an example of using aliasing to your advantage when recovering an input signal?