I have a stream of music that I'm reading(from a microphone, from an online streaming source or whatever). And I want to have a system that will detect when a song changes.

The question is, is this possible with any kind of accuracy?(even something 75% rate of detection would be helpful).

Alternatively, would it be possible to detect large enough changes in the music(so it might be a song change but it could just be a switch from a verse to chorus or chorus to bridge, etc...).

I am not asking for an exact algorithm -- though obviously if you know one then I obviously wouldn't mind -- but even a general approach on how to tackle such a problem would be helpful.

The very first thing to try would be to implement a rough speech/music classifier to detect a radio host/DJ; and to extract the amplitude envelope to detect fade outs and fade ins.

Once you have implemented that and/or if this doesn't solve your problem because your stream is continuous (DJ-style mix), you'll certainly run into the song boundary / song section boundary ambiguity - but if this is not a problem to you then there are solutions. What you are looking for is known in the academic community as ``unsupervised audio stream segmentation" - with a variety of techniques proposed over the years. You have to decide on two ingredients: which audio features to extract from the audio stream; and which statistical analysis method to use to detect changes/structure.

Regarding the features, the consensus is on a combinations of the following:

Very frequently, an algorithm can be repurposed just by a change of features... For example, there are papers on musicological analysis of piano music which will not use MFCC (same timbre throughout the piece), or papers on pop song structure analysis which will not use tempo (assumed to be constant throughout the piece, so not informative) - but the methods they describe could very well work for you if you decide to include other features - so don't be narrow when looking for literature.

Regarding the statistical analysis methods, the usual suspects are: 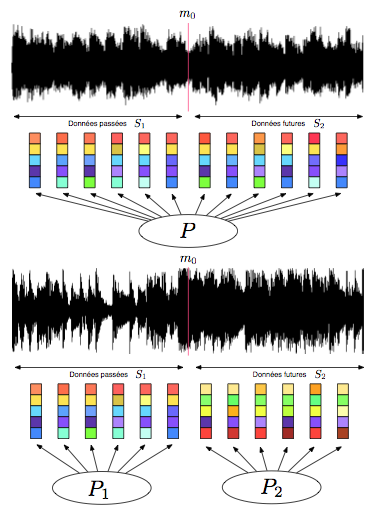 For a real-life application (indexing of radio streams), see for example Ramona's "Combined supervised and unsupervised approaches for automatic segmentation of radiophonic audio streams" - this work combined the kind of unsupervised section detectors discussed here to a supervised speech/music classifier (to tackle the most obvious part of the problem).

I think your best bet is some combination of key and tempo detection. There are a number of threads that discuss how to determine a note's pitch (see here), so I won't get into that. Key detection should simply be an expansion of pitch detection. You determine the pitch of the notes and find the key that matches. You could also use information like that the primary, third, and fifth notes will tend to be more common than the others.

If you started seeing notes that didn't fit the key, there might have been a key change. You could see if the new set of notes match a different key. You could also use the fact that some key changes are more likely than others.

The other characteristic to use is tempo. This is simply how quickly the notes come. Some notes, of course, will be held longer than others (eighth notes, quarter notes, half notes, full notes, etc.), but they should have a primary period. A change in that primary period could indicate a song change.

Not the answer you're looking for? Browse other questions tagged music or ask your own question.

4
How to build a program that gives you on the fly the chords of the song while listening to it?
5
Does taking the Hilbert transform extract the envelope of audio signals?
8
Detecting changes between voice and music
1
Sampling frequency of audio
0
Weird note structure on guitar audio waveform
0
How to compute key of a song?